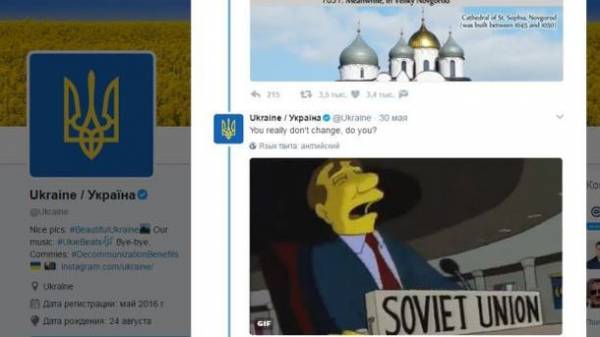 The team coordinator, who maintains an official Twitter account of Ukraine Yarema said Spirit, which began with the story of the skirmishes in Ukraine and Russia in Twitter. This he told in an interview Ain.ua.

He said that the official account of Ukraine in social networks are three people. They also are the communication team of the presidential Administration.

According to him, these accounts are positioned as political, but rather, they illuminate the cultural life of Ukraine, its history and life.

“Our Twitter, like Facebook, Instagram, exist not to “Troll” Russia. We just talk about the life of the country – who knows, maybe someone decides to come after a few hilarious tweets. Regarding content, then we are free, but do understand that there are certain limits when you are writing on behalf of the state. If the content relates to international politics, to show colleagues in the foreign Ministry.

Also Yarema Spirit told how there was a Twitter battle about the history of Anna Yaroslavna after known statements of the President of Russia Vladimir Putin in France.

“Somewhere in the evening Artem (one of the team members – ed.) wrote something like, “Hey, did you see what Putin said about Anna Yaroslavna?”. We decided to postpone the reaction in the morning. I remembered mA’am, where various old churches and monasteries of Kiev, and in Moscow – the forest. Together they have written the text and made the picture titoli and sarasvatii. Honestly, I didn’t expect the Russians something to accomplish your goal. But after five hours they reproduced the tweets about “one nation” and “let’s live together”. Here we have 2/3 of the team of masters history and I am also interested in that thing, so the Parallels with the USSR immediately drawn. “The simpsons” is one of our favorite series. Oleg (the third member of the team – ed.) wrote: “And remember the episode where the Russian Ambassador flips the sign on the USSR?”. Artem immediately found. I had to just press the “tweet” button, – said the coordinator of the team.

Yarema said that the skirmish in Ukraine and Russia in Twitter gave a significant increase of readers of the Ukrainian account – five thousand people a day, although approximately 900-1200 people per month.

“We do not measure, we helped to “trolling” foreign policy or not. If there are a few people who learned about Ukraine and have become interested in our country, people and history – this is the best result for us. As for Russia, it would be better if they focused on the observance of international law, and not on information warfare and cyber attacks,” – said the coordinator of the team of account of Ukraine in social networks.

As reported, Ukraine and Russia in their official Twitter accounts, started to argue for the right to call her the daughter of Prince of Kiev Yaroslav the Wise, Queen of France, Anna Yaroslavna. Ukrainian Smwiki acute “potrollit” Russia to use Gif animations from the animated series “the Simpsons.” 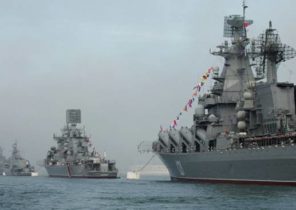 The arms race in the Black sea