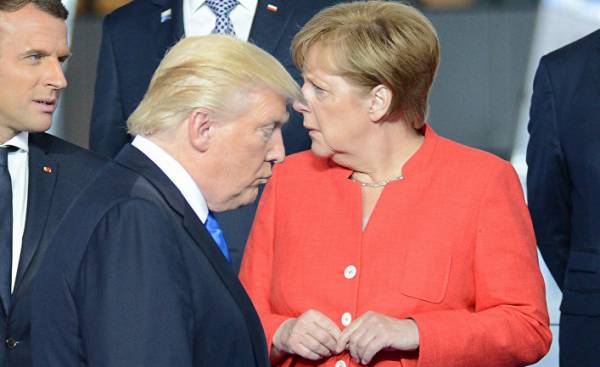 Brussels — Donald trump is the first time in Europe as President.

The American President’s busy schedule of your stay in Brussels.

The main event will be a meeting of NATO leaders on Thursday evening where he will meet leaders of 27 other NATO countries, but trump (Trump) will hold a number of meetings, particularly with President of the EU, the Royal family of Belgium and new President of France.

They are all in varying degrees, was subjected to numerous insults and nasty statements from trump.

The following is an overview of some of his statements, which can spoil the mood.

Meetings are held in the city that trump insulted in strong terms. In an interview after the terrorist attack in Paris in November 2015, the then presidential candidate spoke ugly about Brussels. He, in particular, called the city a “hell hole”.

“I was in Brussels many years ago, 20 years ago, it was so beautiful. Now it’s like living in a hellhole,” said trump in an interview with the TV channel Fox.

The statement has attracted much attention in the EU capital. Some spoke critically about trump, the other responded sarcastically and with humor.

Trump attacked the big cities like London and Paris. In February, his portion was awarded to the French capital, when trump told a story about an acquaintance who had a habit to always come to this city, but who don’t dare to do it.

On Wednesday evening he met with the Royal family of Belgium and Prime Minister of the country in a castle in the centre of Brussels. Trump touched on various foreign policy issues, but it is not known if he mentioned it again on the status of the “hell hole” of the city.

After a night in Brussels starts the marathon, when trump has to hold meetings with nearly 30 European leaders.

He insulted them, each individually and all as a whole.

In December 2015, he has given a collective kick “weak leaders” of Europe for their solution to the problem of terror.

Relations with the EU became especially bad after the trump one of the first acted as a supporter of the British exit from the Union.

After it became clear the result, he stated that “Pexit is a fantastic victory for great Britain.

Trump also predicted that other countries would follow her and said that he still kept those countries together or not.

“The EU was created partly in order to defeat the US in trade, OK? So I don’t care whether they are together or not, I’m still” — he said in an interview with The Times in January.

European Council President Donald Tusk (Donald Tusk) is one of those who warned that the US is currently unable to pose a threat for the EU and the unity of Europe and the tramp stepped back “for 70 years in American foreign policy.” On Thursday evening, trump will meet with Tusk and European Commission President Jean-Claude Juncker (Jean-Claude Juncker).

Trump also made several attacks on the German Chancellor Angela Merkel (Angela Merkel), whom he meets at the NATO meeting on Thursday.

In December 2015, he was indignant on Twitter about the fact that Time magazine named its “man of the year”.

“They chose the man who destroys Germany,” he wrote.

During the election campaign he also criticized Hillary Clinton (Hillary Clinton) because she wants to be “Angela Merkel of America.” He also spoke out strongly against the state that it governs. He, in particular, wrote on Twitter in January last year that “Germany is a mess”.

Merkel has already met with trump in the White house and the meeting overall was very successful, although there have been some strange episodes. In particular, in the Internet appeared the video, where trump apparently ignored the request of the press shake her hand.

Trump is not consistent critic of Angela Merkel, When it in September last year, was asked which world leader he likes the most, he called the German Chancellor.

5. “Strong” Le Pen, the silence of the Makron

Man tramp never spoke with respect, is the new President of France Emmanuel macron (Emmanuel Macron). Just a few days before the French presidential election, trump advocated and warmly spoken of her rival, the representative of the extreme right marine Le Pen (Marine Le Pen). He stated that it was “the strongest on the borders, and the strongest in what is happening in France.”

Him and trump will meet for the first time in Brussels on Thursday at lunch. They are completely different people. While trump has proposed drastic measures against migrants and free trade and he spoke very skeptically about the supranational organizations, the Makron is a big supporter of the EU, with praise speaks about migrant politics Merkel and defending globalization and free trade.

6. The British are hiding the problems of the Muslim

And the British, who traditionally are the most reliable allies of the United States, did not escape the attacks on Twitter.

“The UK is doing everything possible to hide her big Muslim problem,” he wrote on Twitter in December 2015.

At the same time he attacked London.

“In London there are areas and other places so dangerous that the police were there fear for their lives,” he said in an interview with MSNBC.

It was badly received in the British capital. Then the mayor Boris Johnson (Boris Johnson) are repaid in the same coin and called the statement ridiculous.

“Crime fell in London and new York. And the only reason why I would not want to go to some areas of new York, is the risk of finding there is trump,” said Johnson, who has now become Minister of foreign Affairs.

Meanwhile the British had not allowed the old attacks to destroy the desire to co-operate. Prime Minister Theresa may (Theresa May) was the first European leader invited to the White house after the inauguration of the trump. There are, in particular, shook hands.

Before the meeting, NATO leaders first thought about how to make the residents feel welcome and to show that relations between Europe and the United States remain strong.

“It will be a short but important meeting. We have sent a clear message last but not least, to all who doubted the unity of NATO, that we are United. Sometimes it’s important to meet just to send that message,” said the NATO head Jens Stoltenberg reporters in Brussels.