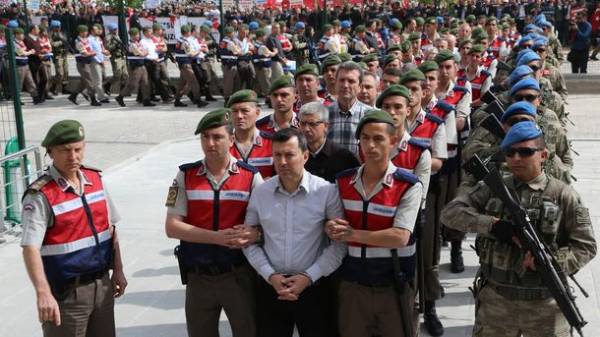 In the Turkish capital Ankara on Monday, may 22, began a new trial against alleged participants in the attempted military coup in July 2016. According to Deutsche Welle, 221 men accused of involvement in mass murder and in the attempt by force to abolish the Parliament and government of Turkey.

Among the charges an attempt on the life of President Recep Tayyip Erdogan and the creation of illegal armed group.

Among those who appeared in the dock, a high – ranking Turkish military, including the former commander military-air forces of the country. 200 people are in custody, 9 released pending trial, 12 did not fall into the hands of Turkish justice. The prosecution demands life imprisonment for the defendants.

Among those who will be judged in absentia – the radical preacher Fethullah gülen living in the United States, which the Turkish authorities consider as the organizer of the coup. The first phase of the trial, which will try to establish what, if anything, did the accused in an attempt of rebellion will continue until 16 June.

As reported in Turkey during the military coup in July 2016 during the clashes were killed 248 people.

After the suppression of the coup in the country, a wave of arrests during which he was taken into custody about 50 thousand people. Nearly 150 thousand people – soldiers, officials, teachers, police officers, ministries and the judiciary – has been fired from work or suspended from duty. Was also closed a number of opposition media.