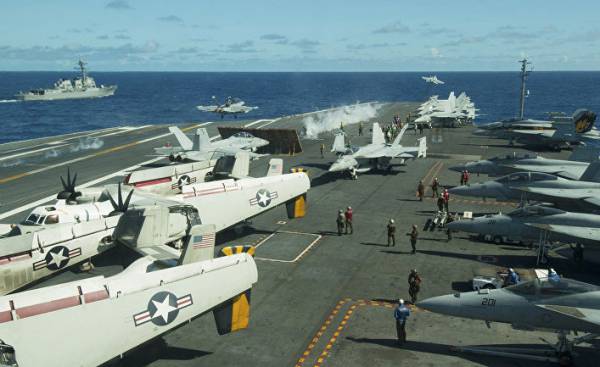 Aviation technical command of the US Navy had a very important assessment of the project on creation of the jammer of new generation.

Created by Raytheon station radio interference AN/ALQ-249 will become a critical element of the aircraft of the U.S. Navy EA-18G Growler to counter modern anti-aircraft missile systems of Russian and Chinese production of s-400 and HQ-9. In service jammers ALQ-99 is not very effective against these advanced air defense systems because they are already 40 years.

“The Department of airborne systems active radio-electronic jamming and the programme management division EA-6B at the end of April had a very important assessment of the project on creation of jammer, a new generation AN/ALQ-249 at the air base of the Navy in Patuxent river, Maryland, — said in a statement air technical training command of the Navy. — During the evaluation the experts came to the conclusion that design and development are on the plan with the implementation of all requirements of military aviation, and in this regard, you can proceed to fabrication, demonstration and testing.”

Because expert evaluation is completed, responsible for the installation and pairing of a new system on the Growler aircraft company Raytheon and Boeing will move now to the final stage of design and manufacture. “We are now at the stage of constructive refinement and prototyping. This is the company, Raytheon Space and Air Systems, which is the Prime contractor, and Boeing, which is working on system integration in the aircraft EA-18G Growler, the statement reads air technical training command of the Navy. — After making the station AN/ALQ-249 service in the Navy completely changed methods of warfare”.

New jammer, which uses phased antenna arrays based on gallium nitride, are much better and more efficient operating systems ALQ-99. Having the ability to electronically scan and innovative opportunities for jamming, the system with open architecture will be a significant addition to the Arsenal of aircraft the Growler.

Jammer is especially effective in combination with modern data transmission devices such as a network for the exchange of tactical targeting data (TTNT) that transmits data many times faster than Link-16. “This system will cope with the new, modern threats in terms of increasing the density of such threats with the latest active phased array an antenna array (AESA), as well as digital and software technologies,” reads the statement of the command.

The first samples of the new jammer must be taken into operation by 2021. But the Navy already has begun work on subsequent versions of the system that will work in low and high frequency range. The second variant of the system that may be adopted in the end of 2020-ies will put the interference of low-frequency early warning radar that can detect stealth aircraft. The third option is designed to counter high-frequency fire control radar. Together, the three versions of the stations of electronic warfare will be an integrated system that is very similar to the current ALQ-99, but these stations are much more efficient.

The program is the creation of jammer, a new generation is a priority for the Navy, as modern anti-aircraft missile systems s-400 and HQ-9 in the world becomes more and more. It looked forward to the troops.