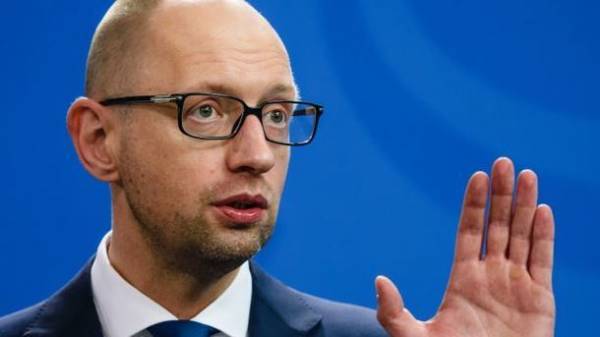 “Russia’s intervention in elections in the United States, as in France, the Netherlands and other European countries must give to understand what is the real purpose of Putin. He wants to burn the whole house the free world, to divide all”, – quotes the leader of the “popular front” Arseniy Yatsenyuk, the American edition of the New York Times, reports 24 Channel.

The article by Peter Baker said about the conversation with Yatsenyuk during his visit to Washington this week. The author notes that Arseniy Yatsenyuk arrived in the United States “with a mission to verify that Ukraine is not forgotten”.

As the newspaper notes, he met this week with Fiona hill, senior White house adviser on Russia, and Andrea Thompson, a national security Advisor to Vice-President Mike Pence: “On Capitol hill he met with lawmakers, such as Senator Ted Cruz, Republican from Texas. He also met with Mr. Obama.”

Peter Baker emphasizes that this is a very important moment for Ukraine, “when Mr. trump on Friday, leaves on his first foreign visit as President”: “After a stop in the middle East and the Vatican, the President will travel to Brussels for meetings with other NATO leaders, especially the Europeans, who in recent years held the front line against the Russian “adventures”.

“Partners were relieved when the President does not lifted sanctions against Russia, as he previously suggested, and in the end stopped their criticism of NATO, saying that NATO “no longer stale”, he said a few months ago,” the article says .

Arseniy Yatsenyuk also noted the decision of Mr. trump does not ease sanctions and said that his meetings with administration officials this week were encouraging. “We go according to the agenda”, – he said.

According to Yatsenyuk, the President of trump needs to understand that “Putin is not a friend.”

“I think the President has to Trump need to get a better understanding of who Putin really is. It is very important to understand. He is an enemy of my country. But he is very smart “political predator”. Its main goal is to defeat President trump”, – quotes Yatsenyuk, The New York Times.

Yatsenyuk wants to trump saw Putin as he sees it. “I do not believe that the U.S. and Russia could improve relations. You are just on different sides of you in different universes. You were, are and will be opponents. You adhere to the values of the free world. He adheres to the values of dictatorship and autocracy”.