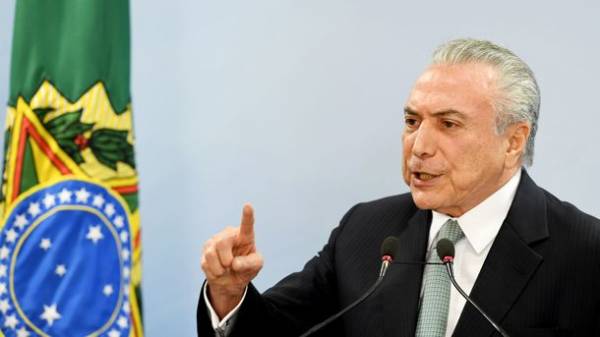 The President of Brazil Michel Temer declared that will not retire, despite the record, which he allegedly discusses “buying the silence” of former speaker of the house, Eduardo Cunha. His words conveys the Agence France Presse.

What exactly was it – not reported. When it became known about the appearance record, opponents of the current government called for the investigation of the case. The judge of the Federal Supreme court of Brazil Edson Fuckin gave permission for the opening of a criminal case. Thus Temer officially became a suspect in corruption.

The President denies the accusations. Amid the scandal, the decision to resign was made by the Minister of culture of Brazil, Roberto Freire, reports TASS with reference to the channel “Globo”. Official confirmation of this information yet.

After the start of the next political crisis in the country, the Bovespa index of the Brazilian stock exchange in são Paulo fell at the close of trading of 8.8%.

Michel Temer, who had been Vice President, became head of state after the issuance of the impeachment of Dilma Rousseff. On August 31, the Brazilian Senate authorized her removal from office for committing financial irregularities. It is assumed that Temer will govern the country until January 1, 2019, when the was supposed to expire presidential term, Rousseff.