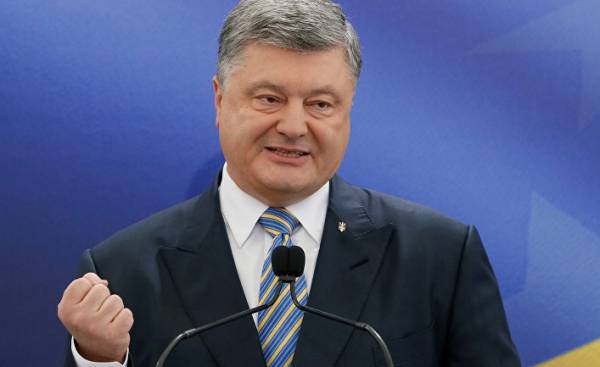 Ukrainian authorities started the process of introducing Internet censorship, justifying this by the need to protect national security against hybrid threats from Russia. In addition, before the introduction of these restrictions was an active discussion of the so-called “groups of death” and the phenomenon of “blue whales”.

May 15, Ukraine has introduced a personal economic sanctions for a period of one to three years in respect of 1228 468 individuals and legal entities, and banned access to social networks “Vkontakte” and “Classmates”, portals Mail.ru and Yandex.ru and a number of Russian TV channels. Petro Poroshenko, while in Strasbourg, stressed that Ukraine is ready to lift sanctions after cessation of Russian aggression in the Donbas. The prohibitions are presented as a tool to counter hybrid threats and the propaganda of the Kremlin.

But experts doubt the possibility of rapid implementation of these bans. “Technically, this is possible only in a year when political will. For censorship requires that providers have restructured their networks,” commented the expert of the Internet Association of Ukraine Maxim Tulev, noting that at the moment Ukraine, unlike many other countries of the former Soviet Union, does not have a tool for Internet censorship.

The introduction of the new law provides an opportunity to begin to develop a kind of switch for the Internet. As a result, “we expect an organization that will monitor the list of banned sites — continued of Tulev. — If under any pretext, a switch will appear, it will be intercepted and used for the purpose for which it can be applied with the sole purpose of political censorship”.

Also in expert circles doubt whether the decree about introduction of sanctions mandatory. “These resources should be blocked by a group of providers who are responsible for the functioning of these sites in the Ukraine. Providers are predominantly private legal entities, and the decision of such a body as the national security Council, cannot apply to them. As stated in the article 10 of the law “On Council of national security and defence,” the decision of the Council of national security and defense of Ukraine, enacted by decrees of the President of Ukraine, are obligatory for execution by Executive authorities”, — said the lawyer Sergei Voichenko. In addition, Voichenko stressed that these bans are a direct violation of article 10 (Freedom of expression) of the European Convention for the protection of human rights and fundamental freedoms.

Meanwhile, lawyer Paul Bogomazov considers that this decision has a legal basis. “As a General analysis of the legal decision, because the FSB has access to personal data of Ukrainian users (both financial and other), and can use them in the current Russian-Ukrainian war,” said Bogomazov. Indeed, according to the “Spring package”, the FSB received powers to the full control of Russian social networks. Also, according to Bogomazova, restrictions regarding the country, which in fact is waging against Ukraine fighting cannot be regarded as restrictions of freedom of speech.

The use of the Kremlin media and social networking to promote and interference in the internal Affairs of other countries for a long time. The latest report from the authoritative organization the Freedom House confirms these fears.

“Online resources have become a weapon of the strong influence, because they allow to structure and to collect information about users, to use this data to generate effects on behavior based on this”, — said the Director of the resource center for human rights Sergiu Ostaf (Moldova) Serghei Ostaf. According to human rights, the logic of Russian special services is the impact on political processes through the use of Russian learning products and user testing. “It is the latter component is the key for the transition to active measures of influence, as shown by elections in the United States. Such detailed segmentation profiles — the basis for the development of MicroStrategy effects already in reality,” explained Ostaf.

However, social networks are not the only source of propaganda. In particular, Freedom House in its report points to a resource Satellite that is part of the Russian state holding “Russia today” — the main source of Kremlin propaganda, headed by the famous propagandist Dmitry Kiselev. In Ukraine there is no representation of this edition, however, in neighboring Moldova Sputnik has a wide audience among the Russian-speaking population. Note that among the readers of the resource, there is also a considerable percentage of the inhabitants of the neighbouring countries, including Ukraine.

In addition, the search engine Yandex filters news streams for different countries in different ways. “For example, Yandex.ru in search of information on Ukraine for Moldovan user only gives the news of Donbass and in international news gives the primary information of the post-Soviet countries to the detriment of the European. There is a clear collaboration of these resources in the interests of Russia”, — he stated.

Experts do not deny the need to combat Russian propaganda, while noting that the most effective method of control remains the pluralism of the information environment. “You have to tell people to act counter-propaganda. Who wants to, he will find,” said Tulev. He added that censorship “is the gallows where they hang people, and don’t call her a rocker”.

“Interesting is the fact that the law on these measures [sanctions on Ukraine] was signed two years before the presidential election. Blocked sites will take three years, and then begin preparations for parliamentary elections. Thus, we are approaching a totalitarian regime,” — said the lawyer Voychenko.

In defense of the Russian sites was made by no less a reputable organization Human Rights Watch, calling such actions an attempt by President Poroshenko to establish control over public opinion.

These discussions, however, related not only to counter threats from Russia. Shortly before the imposition of sanctions against a social network “Vkontakte” in Ukraine, a wave of teenage suicide attempts. In this social network functioned so-called “group of death” or “blue whales”. The curators of such communities were invited adolescents in the “game”, the ultimate objective of which was to suicide. At a press briefing on 1 March 2017 the chief of the Kiev Department of postal and telecommunications Sergey Krapiva said that the office receives on average about 70 messages per day regarding the fact that adolescents can be participants in suicidal groups, but only 15-20% are confirmed during inspections. However, even before the imposition of sanctions the administration of “Vkontakte” independently began to block hashtags “groups of death”.

With the advent of such groups began to form various kinds of conspiracy theories, according to which all the history of the “blue whale” was organized by the secret services, especially in order to prepare loyal to the perception of a ban on a popular resource, the expert said Tulev. But it should be noted that “blue whales” and attempts to commit suicide have been registered in Ukraine. The facts are known in all neighboring countries (especially where the popular Russian social network), including in Russia, Moldova and Kyrgyzstan. Therefore, links to intelligence agencies and legislators on “blue whale” are likely nothing more than a convenient additional excuse for imposing restrictions. For example, after a wave of suicides in Russia in 2016 has been tightened controls over social networks. In particular, it adopted the so-called “Spring package”, according to which the FSB has taken full control Internet space through monitoring social networks and mobile operators.

Active discussion of the “blue whale” in Ukraine in the last two months also might need to make a lock associated with the game online resources a logical action. Tuleev called this process by stirring up the situation to create another reason — in addition to statements on national security — censorship.