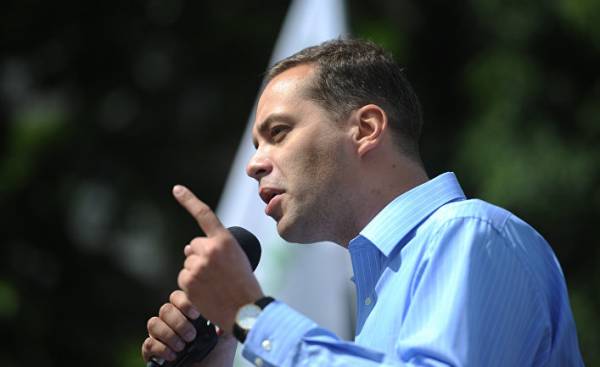 One of the founders of the right-wing liberal Democratic movement Choise 45-year-old Vladimir Milov speaks out against Vladimir Putin.

The everyday life of the activist of opposition, living in Russia, associated with the threat of being attacked. He admits that every day is experiencing this fear. For example, one of the most famous representatives of the opposition Alexei Navalny went to the end of April to Europe for treatment.

“Navalny attacked almost every week. Some bully, which, we believe, sends the Kremlin, comes in and throws something in the face,” says Milov, the newspaper Iltalehti at the International conference of Lennart Meri security in Estonia.

“This time Navalny came out of his office and was going to get in the car to go to address the conference. When he opened the car door, ran up to some guy and splashed him in the face septic substance. Later the doctors said that the fluid had been mixed with dangerous chemicals. The opposition leader received a chemical burn of the eye.”

Milov says that the last time you spoke with the Bulk 11 may, when it returned to Russia from Barcelona.

“It was a difficult surgery. Bulk almost lost one eye. Now right eye he cannot see anything”.

Milov himself several times became the victim of an attack. According to him, in certain places more risk than others. Milov believes that the Kremlin has a permanent team of people whose job it is to attack the opposition. Despite this, mil is not going to give up.

“We will disappoint people who support us. We need to continue our work for the sake of the memory of the slain Boris Nemtsov. We’re not going anywhere, we will not let them win”.

Milov was a close friend of Boris Nemtsov, who was gunned down in Central Moscow near St. Basil’s Cathedral at the end of February 2015.

“His murder was a shock for me. We never could have imagined that things could go that far. It was an open Declaration of war”, — said Milov.

“I am sure that it was the Kremlin’s message to us all: leave the country, get out of here — or it could happen to you”.

Mil knows that in addition to the risk of attack there is a risk to go to jail for one reason or another. In his everyday life, there are always small challenges, but he, nevertheless, lives in his native country relatively freely.

Mil is already more than 15 years working for the Russian government. He began his political career in 1997 as a leading specialist at the Federal energy Commission of Russia. For five years he rose to the post of Deputy Minister of energy of Russia.

Mil decided to abandon the post of Deputy Minister in 2002. He became one of the leading independent experts on energy, and now he considers himself a private person.

Mil knows what is in the black list of the Kremlin, because it is actively working against him.

“Some limitations we have, politicians, opposition politicians and activists, there is, but in General we still do not live in North Korea,” says Milov.

“We are being tested. For example, when I once went to a Bank to change money, the cashier stared at the computer screen. In the end, she said that since I am in the list of persons subject to verification, she will have to report my cash transactions. I said I don’t want to bother and will probably try to exchange money for some other Bank.”

“Every time I cross the border of Russia, to check my passport takes more time than checking the passports of any regular person. Reported that this “bad” crosses the border”.

Milov says that many opposition hard to earn.

“The Russian economy is concentrated around the budget of the state and monopolies. Nobody wants to work with someone who openly opposed Putin.”

As an example, Milov cited the government’s threats to expel students who participated in the anti-corruption rallies.

“If you start to criticize Putin aloud, unable to drive to work or terminate a person’s contract if the work is somehow connected with the government.”

Milov, however, managed to hold the position of international consultant on energy issues.

“Except for me, I have no difficulty with the job search. Ten years ago, I worked with various Russian energy companies. When they later become part of a system controlled by the government, they broke with me”.

Milov could easily find a job outside Russia.

“But I love Russia. Want to reclaim their country from a period of hard times and change. I know I haven’t done enough for peace of Russia. I would like to make more. Can’t leave the country without finishing the job.”

“On the road to disaster.”

Despite the difficulties, mil wants to do everything to Putin’s power weakened. According to him, many would have been better if the Russian government completely replaced.

“Putin is leading our country to social, economic, international and cultural catastrophe. Russia more is not the country we want to live. We want to live in a free country with open borders, which is in peace with all other countries. Putin pays no attention to the welfare and peace of the Russians.”

According to Milov, obsessed with Putin on the geopolitical status of the past centuries leads the country in completely the wrong direction.

“According to the headlines, Putin is very popular, but in reality the situation for some time is somewhat different. Now it becomes visible: many people are disappointed in the monopolistic system, which offers ordinary people the opportunity for a good life”.

Milov believes that people really want changes in government policy. This year, hundreds of Russians protested against corruption in government.

“The government does nothing, although Russia has experienced the worst economic crisis since the collapse of the Soviet Union. In addition, the crisis was delayed, and the hope of improving the situation there. When there is no feeling that the situation is getting better, people start to get angry. There are constant protests,” — said Milov.

“It’s good for the presidential election: at least the opposition can demonstrate that Putin is clearly a problem. He wants to maintain the image of people’s love for the President, but now it is not impossible”.

According to Milov, many Russians believe that Putin will not be removed from the post of President in the elections in 2018.

“We will make sure that it was hard for him to win the election and extend presidential term. If we achieve that less than half of Russians will vote for Putin in the first round, this achievement will have a strong psychological impact”.

Milov believes in the possibility of the existence of a free, democratic Russia.

“I believe that we can achieve more in my lifetime”, — firmly says Milov.