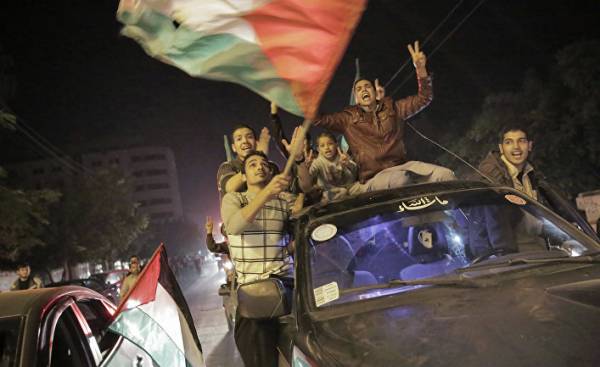 It has been almost thirty years since the publication of the “Islamic resistance movement” (Hamas) during the first Palestinian intifada, the first political document outlining the main ideological positions. A few days ago was released a new political document entitled “General principles and policies of Hamas”. What is new in political thought “Islamic resistance movement”? That’s the question we try to answer.

First, in the new document, Hamas rejects ties with the group “Muslim brotherhood”. They present themselves as “Muslim Palestinian national liberation movement and resistance”, without mentioning their belonging to the “Muslim brotherhood”, as it was previously in the old document in which Hamas was listed as “one of the branches of the “Muslim Brothers” in Palestine. It can be assumed that this kind of response to the regional Arab pressure, which induces the party to separate from “Brothers-Muslims”.

Second, the new document was defined the main goal of Hamas, namely: “the liberation of Palestine and opposition to the Zionist project.” In the old document as the purpose mentioned the building of an Islamic state. However, this time, this item was omitted. Apparently, it’s part of the transition to Palestinian national rhetoric and an attempt to move away from the traditional religious discourse.

Thirdly, in the second paragraph of the new document, the land of Palestine is defined as “land and homeland of the Palestinian people” and the third as the “Arab Islamic land.” It should be noted that in the old statutes of the territory was presented under the title: “Palestine is an Islamic land, wholly owned by the generations of Muslims until the day of judgement”. It is obvious that the difference between the two titles is the relationship between religious and national component, and the latter prevails in the new document.

Fourth, emphasized the role of the Palestinian identity in the determination of the Palestinian people from the perspective of “all its religious, cultural and political components”. The emphasis is on the fact that “Palestinian identity is a basic quality” that defines nationality, and is separated from faith and belief. In the old document, the concept of faith was associated closely with the homeland and patriotism under the concept of Sayyid Qutb that the Muslim has a continuous relationship with their faith and beliefs.

Fifth, the text of the new document clearly reflects the desire of Hamas to distance themselves from all the Islamic extremist groups that operate in the region and have a bad international reputation. In the Chapter “Palestine and Islam” confirmed the intentions of this movement: “We fully understand Islam.” Moreover, the emphasis on the values of peace in Islam, tolerance, peaceful coexistence and cultural creativity. Confirms that Islam stands against extremism, sectarianism and ethnic intolerance. However, during the edition of the old Charter, the problem of extremism has not yet been discussed at the international level.

In the new document says about the differences between Jews and Judaism as a heavenly religion on the one hand, and Zionists and Zionism as a racist hostile expansionist project. They used Judaism so that he contributed to the Zionist colonial project. Sponsored what is known as the Jewish problem, and also contributed to the persecution of Jews in Europe to achieve their goals. It should be noted that in the old Charter did not have such a deep and accurate understanding of the separation of these concepts.

Seventh new thing in the document was the head of the Palestinian political system, in which the Palestine liberation Organization (PLO) serves as a nationwide organisation and “the Islamic resistance movement” is it because of “the need of the development and the restoration of democracy and ensure the participation of all components of the Palestinian people with the aim of defending Palestinian rights.” The text of the old Statute was that a condition for its membership in the PLO would be the adoption of Islam, “the day when Islam will become of the Palestine liberation Organization way of life, we will become its soldiers, and we fully support it”.

Eighth, in the new document, a noticeable gravitation towards a national concept due to the reduction in Islamic rhetoric. One of these concepts is the use of the concept of nation is the Ummah, the national rights along religious, Zionism is Judaism, resistance instead of Jihad, and, ultimately, the goal is the liberation of Palestine, and not the exaltation of the words of Allah… in addition, there were new concepts on issues such as pluralism, democratic choice, political participation, and the unity of national purposes…

Also in the new document in the Chapter “the Occupation and a political settlement,” the emphasis shifts towards the adoption of a gradual approach on the Palestinian issue. Hamas believes that it is necessary to create an independent Palestinian state with full sovereignty with Jerusalem as its capital in accordance with the principles and rules 4 June 1967, that is, the return of refugees and emigrants to their homes from which they were forcibly evicted. However, all this must be done in conjunction and together with the Israeli authorities. In the same document categorically rejected a temporary solution and were not allowed any draft settlement.

Ultimately, a new concept in the political thought of the Hamas movement expressed in the following: first, the shift of rhetoric towards the Palestinian nationalism, which adheres to the PLO by reducing Islamic context associated with the “Muslim brotherhood”. Second, the transition to a phased strategy of liberation, including a “programme of 10 points”, initiated in 1974, was the PLO. However, the plan was subjected to great changes and, after almost twenty years was mentioned in the Oslo accords. Is this development will benefit the liberation project?!