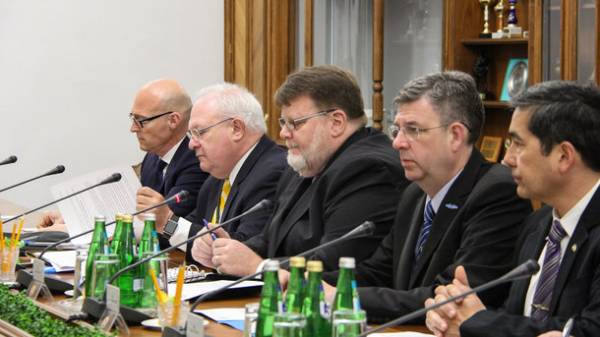 The event was dedicated to summarizing of preliminary results of joint work of foreign specialists and representatives of the defense Department, as well as the formulation of proposals for further areas of work.

The Minister of defence of Ukraine, addressed the findings of American experts about the current state and prospects of reforms in the defense Ministry and the armed forces of Ukraine.

Poltorak noted the constructive cooperation between the advisors from the foreign country and responsible for separate directions of reform of the heads of structural subdivisions of the defense Department.

In addition, the Minister appreciated the availability of the results of work in practically all spheres of activity of the Ministry of defence and the Armed forces of Ukraine.

At the end of the meeting, Poltorak thanked the foreign experts for their work and comprehensive assistance to the military authorities of Ukraine from the United States, and stressed the importance of combining efforts in reforming the Ukrainian army to NATO standards.

The head of the Ukrainian defense Minister gave relevant instructions to heads of structural divisions of the Ministry of defence and the General staff of the armed forces of Ukraine on improving certain areas of cooperation.

We will remind, on may 10 Poltorak has held a meeting with extraordinary and Plenipotentiary Ambassador of Turkish Republic in Ukraine Ionatom Jan Cetelem, discussed strategic cooperation between Kiev and Ankara.