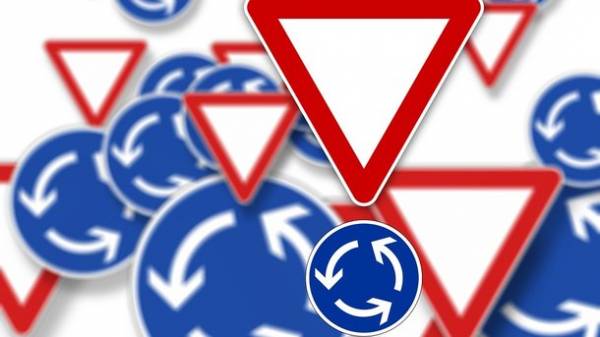 Ukrainian drivers in the near future may be faced with a large number of accidents, fear the lawyers. They believe that the growth in the number of accidents will trigger which entered into force on April 28, law No. 4246: it amends article 41 of the road traffic act changes a rule of journey of intersections during the circular movement, writes UBR.

Prior to the new law the drivers adhered to znachitelnoy or secondary roads, and traffic lights. However, the new law rejects these rules, and puts in the forefront one priority is only the car that had to go to the circle and began to move on it. All other cars must give way. Even if they worked a green traffic light or sign is the main road — it no longer plays any role.

“Due to the fact that local authorities still have not removed the traffic lights and signs main road with cars when driving on Ukrainian roads there is a dangerous situation. The signs do not coincide with the requirements of the new legislation”, — said a senior partner of the law firm “Kravets and partners” Rostislav Kravets.

In the by-laws officials still have not made any changes. The Cabinet issued relevant resolution, which approves the rules of the road, so drivers won’t have started to sell the SDA with a new norm to travel in a circular motion.

By law, the government has 30 days for approval of the new regulation, and probably the time before this document authorities will not begin to remove unnecessary marks on circle movement. The first decade of may showed that officials are not going to rush.

“From-for violations of the rules can get strange effects. Now driver running a red light at the intersection and had an accident, to avoid bringing to administrative responsibility will be able to reasonably claim that it had acted strictly within the law and a traffic light installed in violation of the law. Although based on the categorical provisions of the law, all traffic lights and signs in the night from 27 to 28 April, it was necessary to remove” — said the lawyer Valentin Bogunov.

Due to the fact that the new law contradicts the existing in Ukraine traffic rules and signs on the roads, drivers will be much harder to sue after accidents on the roundabout. After all, every driver will execute a document: the one who are left out sign to the main road — will refer to the existing rules of the road, and he drove in circles and got hit in the side on the new law.

But lawyers argue that the courts will be guided by the new law, not on affixing of the Cabinet. “The courts will focus on the rule of law. In a situation when one driver was driving according to the law, and the second focusing on the signs or traffic lights, the right seems to be both. But the courts are in favor of those who drove under the law. With the conflict of norms can face any direction, and it will give the insurance company grounds to deny or delay compensation and insurance payments,” warned Bogunov.

Drivers will become a lot harder to sue after accidents on the roundabout.

“It is possible that may be a controversial practice in the courts. The fact that the new rules are not detailed while in traffic, this is a significant issue. But the law is always above any order of KM,” — said the lawyer Victor frost.

Drivers are advised to check their insurance contracts and try just in case often err and give way. As is known, in the insurance exceptions many companies have such an item as a “malicious violation of traffic rules”. And late check-out on the circle may fall into the category of “hard-core” cases. In the end, drivers can remain without insurance payment and will have money to repair the car.

Although in a desperate situation you can try to recoup their losses from the third party. “Need to file a claim against services that have not changed the road signs, but had to do it under the new law. To rest on it — that was not completed new requirements. Because they have to pay the driver a loss,” — said Rostislav Kravets.

In case of dispute, in addition to legislative rules and applicable regulations at the time of the accident, for decision, particular importance will acquire technical and technical expertise. It will help to prove, could the driver avoid emergency situations.

If the examination did not hold in place “without delay”, its conclusions may not be reliable. “To the examination and photos from the scene. But, it is very important fixed the car location, nature of injuries, how competent and attentive specialist. Once carried out the examination for the client, and as said the inspector, such examination is not quite correct. It is not 100% reliable. Easier to do on the spot,” explained frost.

In addition, such an examination will take several weeks and cost a little more — 4 – 5 thousand UAH. not 3 to 4 thousand as examination on the spot.

Poor quality expertise are also threatened by loss of litigationthat will result in additional spending on court costs. Today, for filing a lawsuit in court people have to pay a fee of 1% of value of dispute but not less than 0.4% of the subsistence minimum or maximum — 5 minimum minimum. When the price of the claim, for example, 5 thousand UAH. the fee can range from 640 UAH. up to 8 thousand UAH.

If the suit takes the legal entity against a person, the fee will be 1.5% of the claim but not less than 1 subsistence level of 1600 UAH. In this case the upper bound in this case is not limited. “If the car is worth 2 million UAH, will pay 1.5% of the amount. If you win the case, the collection returns the guilty party. If the party is a regular person, it “will fly” to a round sum,” — said managing partner of law firm “Mozhaev and partners” Michael Mozhaev.