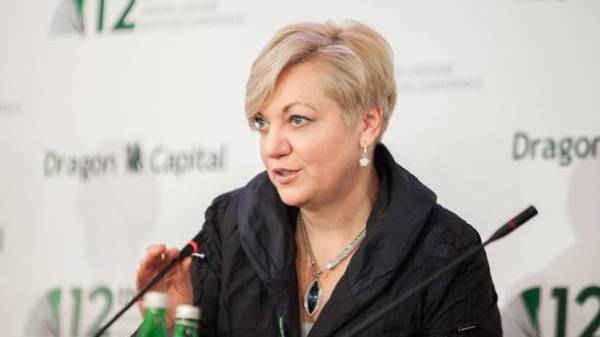 The resignation of the head of National Bank Valeria Gontareva is tightening. On April 10 the Chairman of the regulator has declared intention to leave and asked the President of Ukraine Petro Poroshenko, which takes the decision to fire her until may 10. However, to date, information on the existence of the presidential submission of the resignation of Gontareva no, and the head of the NBU after the may holidays going for a long vacation.

The resignation of Gontareva must agree on the President and Parliament

Valeria Gontareva was appointed head of the NBU on 19 June 2014. According to the Law of Ukraine “On the National Bank of Ukraine”, the President is appointed for a term of seven years. The law also regulates the way in which the NBU may leave his post. There are several reasons: the expiry of a term, resignation, specifying the arguments which was made by the President, the conviction of the court, which entered into force court decision on recognition of the Chairman is incapacitated, the deprivation of citizenship or departure for permanent residence outside Ukraine, the loss of the irreproachable business reputation, the establishment of the fact of providing false information in the appointment to this post, failure to perform official duties for more than four consecutive months, death.

The intention to leave the post of head of the NBU Valery Gontareva said on April 10, although rumors about such decision came a few months before. But according to the statutory procedure, the resignation letter must be signed by the President of Ukraine Petro Poroshenko, after which it will be considered by the Verkhovna Rada. In addition, Gontareva should be in the plenary session of the Parliament to provide the results of their work in this post.

The next plenary meeting of the Verkhovna Rada is scheduled for may 16, but while the representation Poroshenko on the dismissal of Gontareva is not known. Meanwhile, as informs news Agency “Ukrainian news”, citing a source, pdonkey the may holidays Gontareva is going to go a long vacation which can last for about two months.

In April, announced his intention to resign Gontareva expressed confidence that in may, the NBU will be another leader. “Following the Board of the NBU’s monetary policy on may 25, will be chaired by my Deputy/successor – meaning that I wouldn’t be me. This will be my Deputy, if he is to fulfill responsibilities, or my successor, if he will be voted by the Verkhovna Rada”, – said Gontareva.

At the moment duties of the head of the NBU shall be temporarily performed by the Deputy head of the regulator Yakov Smoliy. However, the resin on this post can linger for a long time, believes people’s Deputy from BPP Vadim Denisenko. The second scenario would be the appointment of the head of the NBU Chairman of the Board of Raiffeisen Bank Aval Volodymyr Lavrenchuk, said the MP.

“Bacon and Lavrenchuk has a very good reputation. I think either one of these two candidates, either an unexpected option,” – said Fesenko.

The political scientist Taras Berezovets, in turn, relies on the candidacy of speck. “Speck close to Arseniy Yatsenyuk, has experience in senior positions, so this candidate today has objectively more likely”, – said Berezovets.

Itself Gontareva his successor has already warned that it is waiting for political pressure. At the same time, the head of the NBU notes that the NBU’s efforts may be in vain, if we fail to defend the independence of the national Bank.

Note that it is Lavrenchuk, who, according to some, today is the most likely successor to Gontareva, called for support of its validity, despite their unpopularity among the population. In his opinion, the alternative to reform is not.

The outcome of Valeria Gontareva the head of the NBU

“All the decisions taken by the national Bank aimed to stabilize the Ukrainian financial system, to stop the lawlessness in the banking system to lay the Foundation for building a healthy banking sector in the future. In almost three years of my work as the head of the national Bank we managed to do all this,” said Valeria Gontareva informed.

Also read: Gontareva declared the results of its “reign” in the NBU

In particular, according to the head of the NBU, one of the results was the transition to flexible exchange rate regime. “The desire of politicians for their own interests to keep the hryvnia exchange rate at any cost had a negative impact on all of our macroeconomic indicators. And we finally got rid of the anchors that were dragging us down. Now moderate exchange rate fluctuations are no longer perceived as the end of the world and not provoke panic”, – said Gontareva.

Another result was the building of a new monetary policy – inflation-targeting policy. “The other alternative today for our country simply does not exist. The mandate of the national Bank is to ensure price stability in the state. Last year, the first national Bank assumed the commitment to achieve the inflation target and fulfilled. We have reached our first goal: 12% established by the national Bank under inflation targeting regime”, – said the head of the NBU.

In addition, per the Board of Finance and the NBU, the banking sector went through a reform. In this case, the result is the beginning of purification of the system from the banks that were not engaged in the banking business, of the 180 institutions that were on the market in early 2014, but now there are 91.

These reforms finanalytica recorded in the assets Gontareva – cleaning of the banking system allowed to remove from the financial sector is weak or dishonest banks who laundered money or served as an appendage to the business of the oligarchs. The NBU during the leadership Gontareva 50% had reduced staff, streamlined government spending for its maintenance. In this, the most important of its achievements has been the imposition of a floating exchange rate that eventually allowed to stabilize exchange rate fluctuations. Experts and the provision of a Deposit guarantee Fund money in full, sparing clients from the hassle and gave the opportunity to their contributions. During the work Gontareva was successfully fulfilled the requirements of the IMF, and Ukraine received four tranches from the Fund.

“Gontareva is one of the few officials, which is very positive international partners: IMF, world Bank and G7 ambassadors. Her cadence was closed dozens of banks-pyramids and banks of washes, and the real owners of the banks to stop hiding behind the Cyprus names. The banking sector has ceased to be the preserve of oligarchs, for that Gontareva “award”, received the coffins and other threats,” says financial analyst Michael the ICU demo.

“As an unconditional merit of the NBU is possible to note the quality of interaction with the IMF under the program of expanded financing. The IMF periodically made complaints to various state authorities about the pace of agreed reforms, and even their sabotage, but never by the addressee of such claims was not the national Bank. In General, the leadership of Valeria Gontareva, we evaluate positively, and the majority of the claims to her look politically motivated and unsubstantiated,” – says financial analyst of Alpari Vadim Iosub.

“The peak of the distrust in banks as the time came when Valeria Gontareva. Blame – bankopad, which gave ordinary people an understanding in what the Bank can keep the money. Furthermore, the population constantly fears that the hryvnia could collapse at any moment, which contributes to the manic habit of the population to keep money in different currencies. Also we should not forget about the tight monetary measures by the NBU. We are talking about quite large at the time the rate hike, when the expediency of such a sharp jump, there is a lot of doubt. This has led to the freezing of lending, and hence, the lack of support of economy”, – said the economist.

The expert notes that bankopad seriously hit by the financial capacity of the business, because although the Deposit guarantee Fund of natural persons and shall pay to the Ukrainians compensation against loss of deposits in the broken banks, but of such payments until businesses have is that dream.