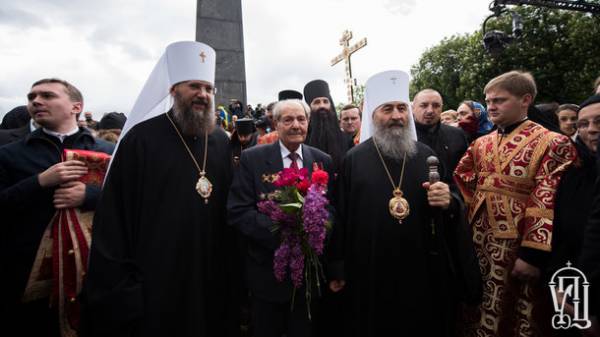 In the Metropolitan Park of Eternal Glory on may 9, the Primate of the Ukrainian Orthodox Church his Beatitude Metropolitan Onufry and many believers prayed for the departed during the great Patriotic war.

According to the information Center of the UOC, lithium funeral was held at the tomb of the Unknown soldier.

“Today we celebrate the Victory Day. In this day God has delivered us from the Nazis – a terrible evil of the world. We prayed for the peace of the soldiers killed on the battlefield, his life for the faith, for their Homeland. We also lift up prayers for the veterans that there is little left between us. Pray that God will bless, giving, happiness, health and all the best. Christ Is Risen!” congratulated Metropolitan Onufry.

The choir of the Kiev theological Academy and Seminary sang for the veterans, combatants and all those present Easter songs.

After lithium, the Primate of the UOC his Beatitude Metropolitan Onufry, Chancellor of the UOC Metropolitan Anthony, the episcopate and numerous representatives of the clergy and believers under the chants of students laid flowers to the tomb of the Unknown soldier.

Attendees walked through the Alley of the fallen Heroes who gave their lives for the Motherland during the great Patriotic war.

As you know, on this day the President of Ukraine Petro Poroshenko honored the memory of fallen soldiers, laying flowers at the tomb of the Unknown soldier.

In all the monasteries and temples of the Ukrainian Orthodox Church held memorial services for those killed during the great Patriotic war.