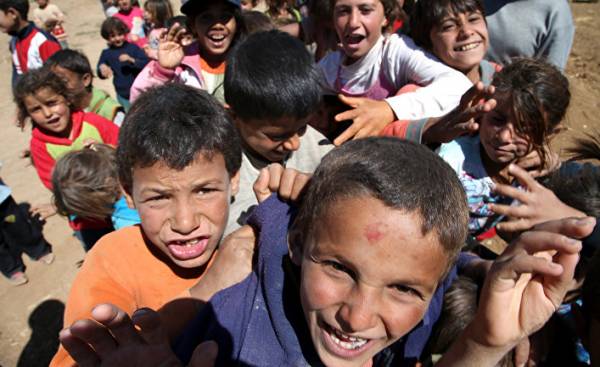 Over the past six years a whole generation of children of Syria have been denied the opportunity to learn in school, as the Assad regime and various religious groups systematically destroyed educational institutions, and forced relocation of people was the weapon with which the regime has forced Syrians to flee their home villages and towns. A whole generation of children he was deprived of education, not to mention their cultural and ethnic background.

Despite the fact that dozens of schools in the South of Syria was subjected to severe bombardments by heavy artillery, aircraft and cask (barreleye — approx. TRANS.) bombs, attempts by the Syrians to find a replacement for the destroyed objects were not stopped during recent years. Any place outside the zone of constant shelling, were equipped for teaching, which despite its poor features and easy educational technologies all went to such schools.

Schools in tents.. to avoid attacks

A team of teachers and volunteers has made tremendous efforts to help 800 children Lidia district in the Eastern province of Deraa to continue training in classes in the old hut near the tents, where the students themselves, away from Assad bombs which destroyed their school.

Teacher Adnan, one of the members of the volunteers told Orient.net they are guided by the motto “Education under the open sky is better than ignorance in the palaces”. To establish a school under the open sky they decided after they failed to convince the children in the nearby tent camps in the villages to go to the local school. They refused, afraid of the constant attacks on schools by the regime… they inspired terror and fear.

Adnan adds that, despite the harsh winter, children are regularly enrolled in these makeshift schools, consisting of several tents. Not enough books, notebooks, copy-book, to teach children the rules of reading and writing, but the project will live on, despite all the difficulties.

The barn turns into a school

Another group of volunteers are not able to find so many tents to accommodate about 200 pupils from the nearby refugee camps in the village Masira. This complex problem could only be addressed by adapting an abandoned grain barn into a school.

And another student told me how difficult it is to attend classes winter students are forced to go on a viscous ground, to get from camp to school, which is severely lacking fuel.

Kindergarten close to the front line

In the village Recruitment centre near the city of Deraa, people live in constant danger and fear because of the attacks, which are almost never subside. Despite this, several volunteers managed to create a kindergarten in the village for those few children whose parents were not evacuated from these places, unlike most of the residents of the settlement. Kindergarten title “Garden of hope”. 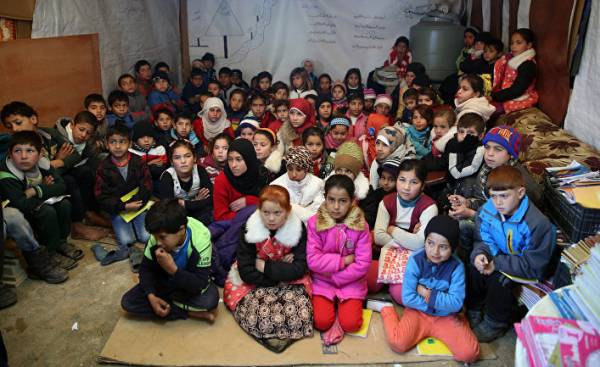 © AP Photo, Bilal Nisa refugees listen to the teacher in a makeshift school in a refugee camp in the town of KAB Elias, Lebanon

One of the founders of the kindergarten in conversation with Orient.net said that since the garden is constantly visited by 75 children, adding that in view of the complicated situation, it is unlikely this number will increase in the near future.

Noteworthy that because of the bombing of regime’s garden operates in multiple shifts. The frequency of attacks has increased since then, as the battle for the liberation of al-Tunnel in the suburbs of Deraa, a few bombs fell near a kindergarten. The work of the institution will continue when the situation is a little stabiliziruemost, and the intensity of the attacks will decrease.

Educational services in the refugee camps

Organization “GASN Zaytun” is known for its numerous educational projects and initiatives in the provinces of Deraa and Quneitra, including 14 schools that have not only educational but also entertaining features. “GASN Zaytun” is engaged in construction of educational tents in different refugee camps in southern Syria, as well as several centers of psychological and legal assistance.

However, the original project of mobile bus-classes, who visited the camp was the most successful. The refurbishment of several bus in school classes, they were able every day to come in several camps, classes in which more than 1000 children.

In its March report 2016 UNICEF provides the following data: approximately 2.8 million Syrian children (living in Syria or in neighboring countries in refugee camps) are not in school. But the Syrians, despite the terrible conditions, fighting for their children’s education with the help of brilliant ideas.