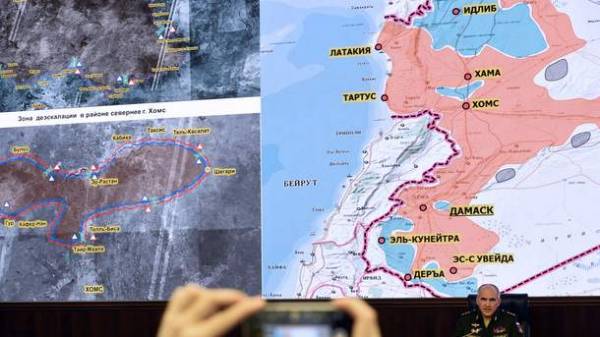 Four zones of de-escalation in Syria, where will stop any clashes between government forces and armed groups begin to operate in the country, according to agreements reached earlier in Astana.

Representatives of the countries-guarantors (Russia, Iran, Turkey) ceasefire in Syria during the next round of international talks in Astana signed a Memorandum on the establishment of four zones of de-escalation in Syria, including Idlib province and seven in other regions. According to the Memorandum, may 6, in these zones will stop any clashes between government forces and armed groups.

According to the Memorandum, Russia, Turkey and Iran as the countries-guarantors of the cessation of hostilities will prepare by June 4 maps of security zones in Syria.

Zone of de-escalation in Syria will be installed for six months with prolongation for the same period, however, the Memorandum may be indefinite.