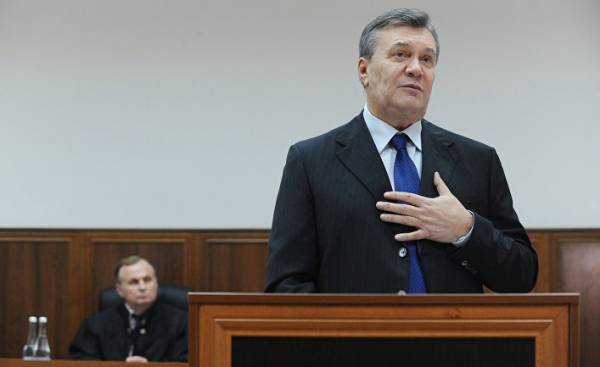 Thursday, may 4, in Kiev begins the great trial “Ukraine against Yanukovych”. The Prosecutor General’s office (PGO) accuses ex-President in treason and hopes sentenced in absentia for the fugitive. This court was supposed to put an end to the history of betrayal Yanukovych, opening the era of the trials of his associates, accused of plundering the country. Will prevail if justice remains a big question.

Why not judge accomplices?

GPU blames Viktor Yanukovych to sign the petition to Vladimir Putin asking the Russian troops on the territory of Ukraine. We are talking about the letter dated March 1, 2014. It is this document that at the time of the meeting of the UN Security Council showed the late Vitaly Churkin. However, Yanukovych himself claims that his name was a statement, not a letter. But this is not so important. The Ukrainian side insists that this appeal marked the beginning and the annexation of Crimea and war in Donbas.

But if to be absolutely precise, Viktor Yanukovych changed his state back on 21 April 2010. It was then that he, along with Dmitry Medvedev signed the so-called “Kharkiv agreement”. They extended the stay of Russian black sea fleet in Crimea from 2017 until 2042. Two former President of Ukraine Leonid Kravchuk and Viktor Yushchenko called the agreement treacherous, and then opposition to the blood (in the literal sense of the word) tried to prevent their ratification in the Parliament. But 236 deputies led by speaker Volodymyr Lytvyn voted for “Kharkiv agreement”. This became the beginning of a great betrayal of Viktor Yanukovych.

Surprisingly, the General Prosecutor’s office began not with the events. And for good reason. Because of those who pressed the button “for” the ratification of “Kharkiv agreements”, still sit in the Verkhovna Rada. They continue to change the state. As I continue to walk free and other cronies of Yanukovych — those who in the presidential administration, ministries and departments, preparing the soil for treason. And they sit down on the dock is still unknown.

On the eve of the trial of Yanukovych, Petro Poroshenko officially announced the confiscation of 1.4 billion dollars belonging to the ex-President and his associates. Despite all the pessimism of Ukrainians and categorical rejection of Yanukovych to the availability of such amount, the ice, as they say, was broken. Almost for the first time in three years post-Maidan government has demonstrated determination and persistence in relation to the “ex”.

Prosecutor General Yury Lutsenko trial Yanukovych calls unprecedented. Yes, the process, no doubt, promises to be unique. For the first time in 26 years of independence of Ukraine President is accused of treason. It requires prosecutors and court special training. To make a mistake in this process does not. At stake — the reputation of not only the current government but also the country as a whole.

Sentenced in absentia Viktor Yanukovych was supposed to speed up trials on “former”, and most importantly — return removed them from the land of money. In Ukraine, the legends on untold wealth stolen by Yanukovych & Co. But in addition to these 1.4 billion in the budget is that nothing is done. What will be the verdict to the former President, is also the destiny of “gone” by him and his associates money.

The second campaign of the Poroshenko presidency

Start of the trial of Viktor Yanukovych is the beginning of a new campaign of Petro Poroshenko. The current head of state aims for a second term. He was, of course, need a bright victory. And, above all, a victory over Viktor Yanukovych. Even if this victory is part-time. After all, over the last three years call Maidana “to Bandits — prisons” remained unfulfilled.

Prosecutor General Yury Lutsenko, of course, promises to deal with former President Yanukovych and his accomplices. Until August 24 this year, he announced the start of trials of medialisation Sergei Kurchenko, former head of the Ministry of revenues and duties Oleksandr Klymenko. Resides in jail the former head of the faction “Party of regions” in the Verkhovna Rada Alexander Efremov. But all this does not mean that they will be condemned. The current government has used to broad political gestures, which, unfortunately, has not yet been filled with real actions (and, in other words, sentences).

The desire Poroshenko to receive dividends from the trial of Yanukovych is understandable. But it might well be that in two years when Ukraine will have its next presidential election, the incumbent President will ask not only about the punishment of his predecessors. Peter I may have to ask about his associates. In this case, the sentence for Yanukovych could be very useful.