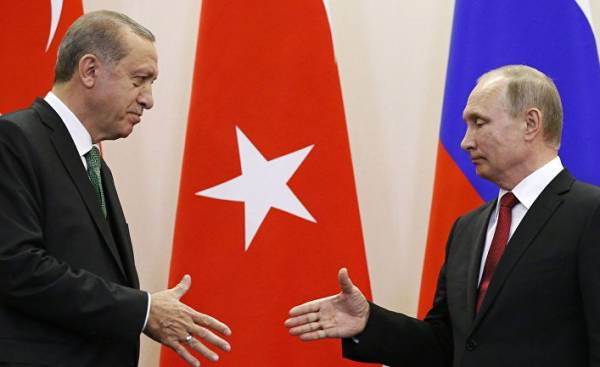 The fifth in the last nine months of President Recep Tayyip Erdogan and Russian President Vladimir Putin — according to official statements — has ended with the wrong result, which could be called “urgently important.”

Before the summit, it was expected that the negotiations will be three themes: problems in the trade, the Syrian issue and the topic of s-400.

At a press conference held after the Sochi meeting, the leaders confirmed that the first two topics were considered. Putin said that trade restrictions applied against Turkey will be cancelled with the exception of visas and tomatoes. This, of course, important and positive statement, but after the summit, held last March, Putin also said that the barriers against the Turkish businessmen will be removed, but this did not happen.

The struggle that goes on between the two countries in trade, for some reason, focused on the “tomato” issue. This theme, of course, important to affected producers, but along with the tomato ban, the damage from which is estimated at several hundred million dollars, it is also about embargoes applied against the Turkish businessmen in Russia for a year and a half.

The loss of Turkish contractors account for, at least several billion dollars. Moreover, the construction sector, there is still large masses of people in connection with the attraction of labour force from Turkey, using Turkish materials, logistics.

When Erdogan accused Assad of the attack with chemical weapons in Syria, without mentioning his name, it became clear that in the Syrian issue, the parties ‘ positions have not changed. Although, as you know, Russia was concerned that Turkey very often and publicly voiced his thesis about the removal of Assad from power. At the press conference was not made any statements on the issue of Russia’s relations with the people’s protection Units (YPG), however, it is clear that this topic is extremely important for Turkey.

A topic that was generally not addressed at the press conference, the situation with the acquisition of Turkey-400 from Russia. This question, which from time to time appeared in the Turkish press often discussed in the Russian media. In the comments, which appear in the Russian press, this question usually look through the prism of the “change of axis” in Turkish foreign policy. In other words, according to Russian commentators, if Turkey buys s-400 missiles, it would imply that it starts to break away from Western Union. But if it does not, the political and military rapprochement with Russia will be shelved and Turkey will continue on its way.

The word soon with a high probability will gradually begin to clear, what at the Sochi summit was discussed behind closed doors.