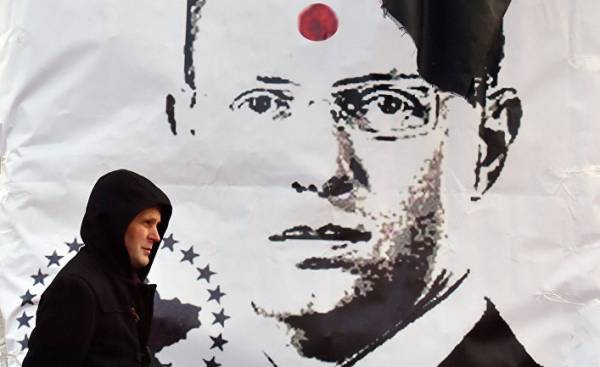 You laugh, but Russian law enforcement authorities are finding new evidence. They are perfect, spotless clean like a raving idiot. The office says the paper, the reality is nervously Smoking in aside. So, without any jokes, the Ministry of internal Affairs of Ukraine received a copy of the letter of the law-enforcement bodies of the Russian Federation in the Interpol General Secretariat in Lyon with a request to declare Arseniy Yatsenyuk in the international search to arrest and further extradition to the Russian Federation.

The charges are serious. According to the Russian investigators, Ukraine (then still a student) killed 30 and wounded 13 Russian soldiers during the fighting in Grozny of the Chechen Republic. The future of the Ukrainian Prime Minister was allegedly a member of an armed gang “Dream”. Together with her “participated in the attacks on the Russian military on military units of Russia on the territory of the Presidential Palace, the square “Minutka” and train station “Grozny” from 31 December 1994 to 2 January 1995. 30 killed and 13 wounded Russian soldiers in one day — January 1. Good result, I think. That is one Yatsenyuk (remember — at that time a young student) can destroy the Russian army completely in maybe two years, maximum three. But if it will help known to the Russian audience saboteurs and Zorian Shkiryak? Mordor is not to be envied.

Funny here is not so much. Of course, to laugh at these statements of Russian investigators, enough to raise the attendance log in the office of Chernivtsi University. But they generate this nonsense is not just out of boredom, and for what purpose? So annoying their Yatsenyuk so much that they are willing to look like idiots. If only somehow to add to his problems. But why? Yatsenyuk, a year is not the Prime Minister, he is not the MP, just the leader of the party — why so much hate Mordor? And it’s simple. He drank the blood as the Ukrainian Prime Minister and continues to create problems.

The refusal of Ukraine of Russian gas was a blow to the whole anti-pattern. And no matter how much we lied now that we buy the same gas in Slovakia, the truth lies will not. Though, because there we buy mix mix gas from at least four sources. And Russia has disappeared levers of pressure on Ukraine in the form of a valve and accusations of theft. Plus, some of the oligarchs sitting on the pipe, was left without a source of income — they’re angry, but no money is reminiscent of a Cobra that pulled teeth. Hiss through the remaining channel, but has no money.

And nuclear fuel? The Russian Fuel was a monopoly, and now there is. First 5% went Americans now 30%. Another year, maybe two, Mordor discard with the Ukrainian nuclear fuel market. Without the noise and big words Yatsenyuk’s government beat the Russian business in Ukraine on the sore. This is not a slogan. These are the facts. Of course, in the Kremlin hate him. And trying to create problems at the international level. Interpol is first and foremost a bureaucracy, and there is no rule of reality and of paper. Russia these securities will give a year you can wipe different places.

Next will be more fun. Arseniy Yatsenyuk active supporter of the establishment in Eastern Europe of a new anti-Russian bloc. This he recently spoke at a forum in Kyiv and invited the Prime Ministers of the Baltic countries. This question always goes to the leaders of Western countries. And builds a dialogue with the West in the language of interest, which is much more efficient requests and complaints. The process is, and to him expressed the keen interest of the US and NATO. Because they are willing to help those who show result. And Ukraine shows good and to stop Russian aggression few could for the last hundred years. So wait for the new portions of terrible accusations from the Kremlin.

Well, what thirty dead Russian soldiers in a day? Finely. STO. Or two hundred! Not just killed, but eaten. And another thousand were captured and tortured, forcing them to teach this complex and incomprehensible to the Ukrainian language. Thousands of captives died only escaped the old man Azarov, but still suffer and cannot speak normally. I don’t know if there are any brakes in the minds of the Russian propagandists and what they will stop. After eaten by bullfinches and the crucified boy logic fell into agony. A weathervane of Russian propaganda affixed to the floor and the wind of doom blows in the specified direction. We — The Junta. Terrible country, which would not have, but which gives the face the invincible Russian army. On a daily basis. This is a paradox.