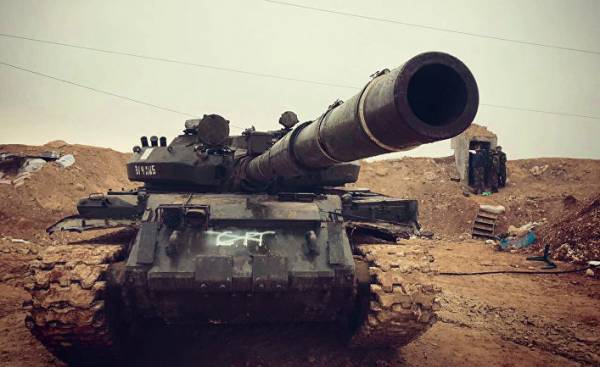 Assad’s forces still trying to regain control over the province of Hama, where the government is in the hands of the Syrian opposition. The Syrian regime has attracted the militias from Iran, Lebanon and Iraq to the beginning of last month to launch a large-scale military campaign with the use of tanks, mortars and air cover forces of the Russian aviation of the Syrian regime.

Hama province, subordinate to the local administration of the interim government, appealed to the international community with a written statement, demanding to put an end to the flights of combat aircraft and systematic attacks and protect the civilian structure.

This military campaign was the most brutal of those who have seen it. In social networks, the activists discussed under the hashtag “ham on fire” crimes that Assad and Russia are committing in the cities of the province. In accordance with the statement of “free the province of Hama”, the purpose of Russian aircraft from the beginning was to “destroy the social infrastructure: hospitals, schools, shelters, religious buildings and centers of civil defense”. The bombing was concentrated over such cities in the province of Hama, as a Halfa, Taybet al-Imam, Suran, Kafr Zita and al-Latamna. The statement said that the infrastructure in these cities destroyed by 90%.

Russian and Syrian aircraft do not leave the sky in the provinces of Hama and Idlib for more than two weeks, conducting a scorched-earth policy directed against military and civilians. the Purpose of destruction are transmission lines, as well as hospitals, roads and centers of civil defense, ambulance, schools and other municipal facilities. During operations, use weapons of internationally prohibited — phosphorus, chlorine, Napalm and cluster bombs.

The leaders of the “Free Syrian army” compared the Russian campaign in the province of Hama with an operation in the city of Grozny in Chechnya in 2000. After the withdrawal of Chechen troops from the city of Russian military equipment on the orders of Putin bombed the city all kinds of deadly weapons. The city was destroyed. The sight of all humanitarian organizations and human rights were killed more than 35 thousand civilians, including five thousand children.

Today, the same army and the same President, but the action takes place in a different region. Russian military equipment is mercilessly bombed Hama and Idlib, making no distinction between stone and man, and ignoring all international and humanitarian conventions. This happens with the whole world, which still could not put an end to the Russian presence in Syria. On view at the White house, which put an end to the Syrian regime use of prohibited substances, bombing the airfield shirt, but implicitly allowed him to continue to use other types of weapons.

Last week the city of al-Latamna and Kafr Zita, under the control of the Syrian opposition and is its largest point, after regime forces took the town of Halfa and Taibet al-Imam, was subjected to unprecedented brutal bombing. Russian military forces have carried out more than dozen raids with rockets loaded with poisonous phosphorus and chlorine. In the town of Kafr Zita was completely destroyed and disabled city hospital. Was the destruction of the only working in the town bakery and a civil defence Centre No. 1077, eight volunteers were killed.

Activists report that in April destroyed nine hospitals and health centres in Idlib province, also destroyed all hospitals and health centres in Hama. Before the start of this military campaign, about 1200 families were in Kafr Zita and 800 families in El Latamne, however, due to ongoing attacks from all kinds of weapons began mass migration. At the moment in these cities there were only 300 poor families who cannot afford the costs of moving to the North.

The Syrian coalition’s statement confirmed that “in April Russia has destroyed in Syria 11 hospitals” and noted that hospitals are “the main goal of the Assad regime and Russian occupation.” The opposition also explained that in April, “there was a sharp increase in the number of destroyed health facilities in the bombing”.

The purpose of fierce Russian campaign

Observers believe that the escalation in Hama, Russia aims to take control of areas, which now are under the power of the opposition. Russia is also in a hurry to take control of the city of Khan Sheyhun in Idlib province, in order to cover up the traces of the chemical attack committed by the Syrian regime and claimed the lives of at least 100 civilians, after which the US President Donald trump has decided to launch a military attack on the base Shirt, where the plane took off with poisonous gas sarin.

Russian bombing also have an unprecedented goal is to complete the unloading of the region and move its residents to the North, in the Syrian province of Idlib. The Syrian opposition can’t disregard Hama and easily abandon it. This is the first line of defense in Idlib province, which has today become a most famous stronghold of the Syrian opposition, and where the Syrian regime and Russia seek to send refugees from HOMS, Damascus and Aleppo.

Until now, the opposition lost the majority of operations carried out by forces of the Syrian regime. Therefore, its sustainability needs international support and real change in Washington’s position against the Assad regime, which should not be confined to the question of the use of chemical weapons. As the regime has killed in Khan Sheyhun 100 people, and the Russian missiles every day, inexorably, killing dozens of local residents.