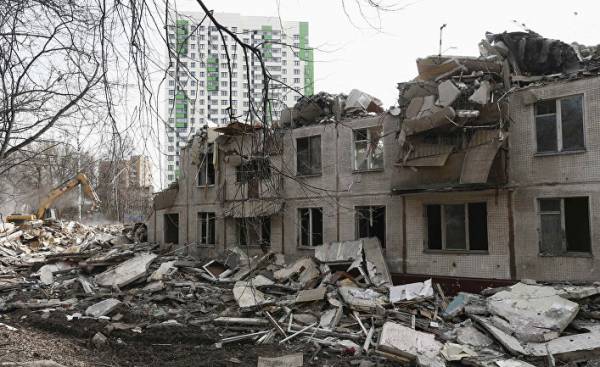 Rapidly developed ambitious plans of the Moscow government to resettle 1.6 million people and carry about 8 thousand houses in record time, raised the alarm in the Russian capital. The owners, which is likely to touch, fear that instead of apartments located in landscaped courtyards, lush green, they will live in houses nests in areas with poor infrastructure.

In February of this year, Moscow mayor Sergei Sobyanin has received the consent of Russian President Vladimir Putin on the implementation of an ambitious program of renovation of the housing stock. This project is developed without taking into account the views of citizens and independent experts, involves primarily the demolition of five-storey buildings — “buildings” or “Khrushchev”, which received this name due to the fact that their construction began in the fifties of the last century, when the country was ruled by Nikita Khrushchev. “Khrushchev,” was the first major program of the USSR in the field of housing construction that helped to resettle millions of people from communal flats. Subsequently, a five-storey homes have replaced the more modern buildings. But the plans of the incumbent mayor of Moscow differ from the projects of his predecessor, Yuri Luzhkov, in its scope, and uncertainty, which may lead to arbitrariness and abuse of power.

Under the previous program, which began in 1999, were relocated more than 160 thousand families, and demolished in 1651 the house has a total area of six million square meters. It is now planned to carry 25 million square meters, which is home to 1.6 million people. This is more than four times the size of premises disposed of in accordance with the project of Yuri Luzhkov.

Under the terms of the previous program of the demolition of houses, most of those families still live in the same area, but the implementation of this program it seems difficult, as the area of land that could be used for construction declined significantly due to the wide spread method of so-called infill development. In social networks and in the real world Muscovites quickly organized, and the topic of renovation has become a powerful unifying factor in the mode of horizontal ties between the neighbors, ready to defend common interests.

List houses for demolition may include buildings, built at different times: from the Stalin era to the collapse of the Soviet Union. In addition, this program provides city authorities broad powers in implementing large-scale resettlement of citizens as they deem necessary.

The municipality is in a hurry and is already preparing for the demolition, despite the fact that the bill, adopted on 20 April the State Duma in the first reading, caused discontent of the population. President Putin instructed this week to thoroughly study the bill, so he could be adopted in the final reading and signed by the President. Putin said that the need to respect the rights of citizens, and that resettlement cannot be forced. These statements were made after a number of analysts suggested that the plans of the government of Moscow can have a negative impact on the popularity of the head of state on the eve of the presidential election.

From five to twenty stories

The bill, approved by the State Duma in the first reading, has buildings of the “first period of industrial housing construction” and “similar in their constructive characteristics” homes. According to the text of this bill, the tenants of demolished houses, with the exception of those who live in the center of Moscow, can be relocated to nearby areas and to obtain “equivalent” housing (in terms of number of square metres), without taking into account its value on the real estate market, type of building, infrastructure and population density in the new area. According to the Deputy of the state Duma Gennady Onishchenko, instead of the five-story building will be built at home with a minimum height of twenty floors.

The current bill restricts the constitutional rights of citizens to judicial protection, providing them with the opportunity to participate in all subsequent trials up to a maximum period of 60 days. The decision on demolition of houses will be taken by majority of votes of apartment owners, a municipality can create a Fund to promote renovation of the housing stock, which will organize and Finance the construction of a municipal megastructure.

The economic crisis affected the construction sector in Russia, and on the outskirts of Moscow towering bad fit into the surrounding landscape of high-rise buildings, whose construction is often not completed and where there are many unsold apartments. Now these buildings can be included in the urban renovation programme. The Chairman of the State Duma Committee on housing policy and housing and communal services Galina Khovanskaya believes that the plan of the government of Moscow is beneficial to the investors and developers who want to improve their financial situation. Khovanskaya, spoke against the implementation of the municipal program, claims that it provides that the authorities of Moscow “excessive freedom of legal regulation” and could lead to “serious abuses”.

In addition, in its opinion, this draft law was developed “without regard to previously approved documentation on the territory planning”, as in Moscow, already operates the General development plan of the city. If the bill is passed in its original edition, the city authorities will be able to benefit from the acquisition of ownership rights to freed as a result of demolition of land, which now belongs to the owners of residential premises in the houses standing on the land.