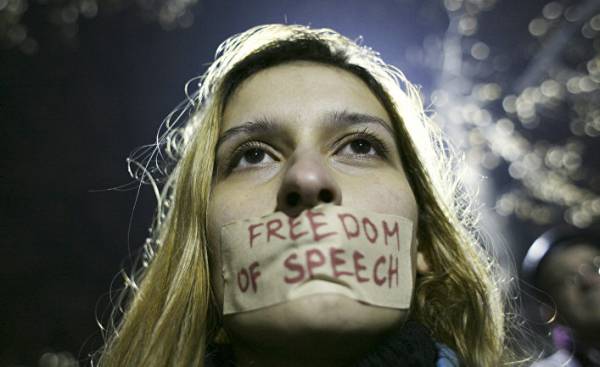 A couple of years ago I was a member of the conference dedicated to world press freedom day, which UNESCO organized in Riga. The head of this organization, a graduate of MGIMO, the Bulgarian Irina Bokova, it was hoped to hold the office of the UN Secretary General. In this she was supported by the Kremlin. The conference theme of freedom of speech in post-Soviet countries, especially Russia, were, to put it mildly, not Central.

Who is better — Putin and Rahmon?

On the one hand, Ms. Bokova was in its own right: worth to talk with colleagues, for example from Tajikistan, Emomali Rahmon, to understand — in Russia things are not as bad as it could be. On the other — it was enough to turn on the TV in a hotel room somewhere abroad, in order to understand real freedom of speech under Putin remains an elusive dream.

This seems to be a festive day on 3 may, world press freedom day, we, Russian journalists, should meet without much joy. All public opinion polls in Russia show that the freedom of speech for Russians is not of great value. Together with the elections they have one on one of the least important places. Also our fellow citizens about the idea of censorship. It supports more than half of the respondents.

However, taking a guess: under censorship, the Russian people will likely not understand the political constraints, and the reduction of exposure to violence on TV, especially in primetime. But in General Russian public is in the majority doesn’t see connection between what is important in life, and free journalism. Our work is necessary and important to a very small minority.

Defenders of the Yeltsin legacy and the “dashing nineties”

It was not always so. In the nineties the journalism of Russia was much freer, despite the oligarchic mediavoyna. Few people remember today that on the state channel RTR (now Russia 1) during the first Chechen war, criticism of the policies of Boris Yeltsin appeared at least, if not more frequently than the advocates of the Kremlin. I refuse to wear sackcloth and ashes about the bias of most journalists during a confrontation between the President and Parliament in October 1993 or 1996 elections.

I will never forget the Communist pickets in the spring of 1996 at the building of “Izvestia” on Pushkin square, where I then worked. The participants lined up in front of the main entrance with placards of the type “W..dy “News”! Soon you will chase filthy broom!” Support in these circumstances, the abstract idea of objectivity and impartiality seem to us suicidal. Your (our) choice then I don’t deny it, and not ashamed of it.

Of course, nobody could imagine what would happen in Russia just a few years later. However, I don’t think seventeen years of suppression of freedom of speech under Putin is just the result of a loss of orientation by the journalists of the nineties. The Kremlin gave the Russians what they wanted to hear, and this is the main problem of the country today. However, no society lives in a state of hypnosis forever.

Censorship of the Kremlin will change censorship “liberals”?

However, there is another, potentially more important problem. Much of the opposition intelligentsia, for which as yet there is no independent journalism, are often willing to restrict opponents, the nationalists, Stalinists, monarchists and simple crazies. Social networks are filled with references to the European experience of the prohibition of “hate speech” every time some “Cossacks” have another picket at the art gallery, showcasing “contemporary art”.

But freedom of speech, from my point of view, is inseparable from the freedom of Assembly, art actions, nationalist and Marxist statements, marches for LGBT rights and demonstrations against them, pornography and fundamentalist Orthodoxy. What guarantees the first amendment to the Constitution of the United States, even under Obama, though the trump, and a lot less legislation of EU countries.

Unfortunately, not all, but many of those who sooner or later will certainly define a policy in the new Russia after Putin, it seems, are ready to re-ban “wrong opinions” immediately after coming to power.

The press freedom day round the year

Should start in the company of educated and tolerant people debate about the notorious 282 “anti-extremist” article of the Criminal code — and you will immediately find that many people have different lengths of the list of opponents for the sake of which this article is necessary to modify, amend, reduce, but very rarely — to cancel at all. I was particularly stunning when I meet a readiness to censor the “wrong” opinions of the students with whom I meet often in different Russian cities.

Meanwhile, thoroughly individualistic, loving money and scale, politically incorrect and sentimental at the same time Russia is only the absolute freedom of expression on the American model is able gradually to educate the citizens responsible for their words and so, sooner or later, — for their life.

For society is almost an epidemic of irresponsibility only real competition in the economy, politics and the intellectual sphere, only full disclosure shocking, “wrong” opinions and actions can be an effective cure. Supporters of the Russian version of the first amendment have to unite and begin to agitate in favor of its development and inclusion in the new Russian Constitution, which inevitably have to take.

Day of freedom of press, freedom of speech, freedom of shock, and sometimes — Oh, the horror! insults should be our greatest holiday. Not only may 3rd, but all the other 364 days of the year.