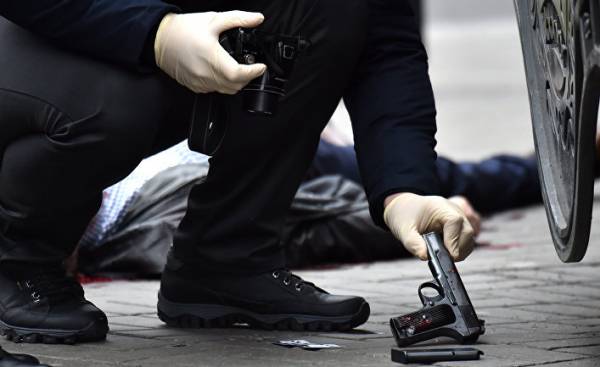 The return of global power by intersection of red lines and fear the unexpected action is working against Russia. Now every unpleasant surprise can be blamed on Russia. Charges at the highest level before the investigation started far from the idea of building legal state, but the temptation to add to the story of an unpredictable Kremlin is great not only in Ukraine.

The fate of the former Deputy of the state Duma from the Communist Denis Boronenkov, who first voted for annexation of Crimea and rejoiced in him, and after the loss of parliamentary status was a citizen of Ukraine, looked like a sketch of the future of many representatives of the Russian elite. The times of Vladimir Putin is not eternal, after them, Russian politicians, security agencies and officials will be forced to change the behavior and rhetoric, and the choice Boronenkov could appeal to someone as one of the options. Until yesterday. Denis Voronenkov was shot in the center of Kiev in the afternoon, the killer, who wounded a security guard of former MP, died in the hospital. Disclosure of assassinations, especially of political — business infrequent. Russia has still not solved the murder of Vladislav Listyev (1995), in Kiev last year, was murdered journalist Pavel Sheremet — the criminals are still not found.

The truth is the truth

When the victims of bullets or explosion become symbolic figures (a Boronenkov after the change of nationality has become such a figure), the search for the real customer is often not a very important thing: everything is clear and true. The President of Ukraine Petro Poroshenko before receiving any data publicly called the incident “state terrorism” on the part of Russia. “It was usual for the Kremlin to make an example of the witness”, — said prior to trial, the public Prosecutor of Ukraine Yury Lutsenko. In classic diplomacy and international relations, especially in the first hours after high-profile events that are impossible, they violate the explicit and implicit canons of law. The problem is that relations between Russia and Ukraine after the events in the Donbas faces normal long crossed. Vladimir Putin can blame the leadership of the neighboring country in the escalation of hostilities in the Donbass, to “knock it out of the EU, individual European countries, from the United States and international financial institutions, presenting itself as a victim of aggression.” The head of the Investigative Committee Alexander Bastrykin still in 2015 trying to catch Arseniy Yatsenyuk to participate in the Chechen war on the side of the separatists. The exchange of views between the two countries for a long time in the language of propaganda, and the murder of Denis Boronenkov for each party is the perfect base propaganda as cynical as it may sound.

The Enemy Of Russia

The death of Denis Boronenkov really beneficial to the Russian authorities, to argue with this statement very difficult. Former (and current) members of the state Duma left the country before — so did, for example, opposition leader Ilya Ponomarev. His life abroad, the Kremlin was interested enough, though the case against Ponomarev, just in case opened. But Boronenkov cannot be called as an ordinary Deputy, even an outstanding parliamentarian may not be very knowledgeable in the real hands of Russian domestic politics with its power component. Denis Boronenkov “power kitchen” knew. He was a Colonel in the Federal drug control service in time of war this service, or rather its head, one of the old associates of Vladimir Putin, Viktor Cherkesov and the FSB.

In the middle of zero Vladimir Putin was engaged in equidistance from not only oligarchs, but also the security forces, between which, then, was encouraged and still encourages mutual competition. The investigative Committee is in conflict with the state office of public Prosecutor; Ministry of internal Affairs is trying to enter the territory of responsibility of the FSB. Each of the power structures can be described as a Corporation: of his controlled business and financial flows, its people with guns and crusts, which give access to anywhere. The world of Putin’s security forces are very close to the feudal device: support the vassals of their overlord, but fighting among themselves for resources, enter into situational alliances, break them. This struggle, of course, non-public, her evidence is the abolition of some structures (as FDCS) and send their executives to an honorable retirement (as Viktor Cherkesov), the creation of new offices (from the depths began to increase the Prosecutor General’s office released the Investigative Committee), news about how one service is listening on another, the arrest of employees of medium and medium-high level.

From this non-public struggle depended and depends on many hands, the Russian policy and economy. Denis Boronenkov knew the situation from the inside: maybe the recent history of the struggle of the security forces, its hidden springs and mechanisms it is well known was not, but in past wars he knew well. In an interview with “Novaya Gazeta” General FSKN Alexander Bulbov was the main victim of the battle of the Department with the FSB (arrested in the so-called business “Three whales”), doubted that Boronenkov “has valuable information that can harm national security of Russia”. However, even the scheme of work of the security services, which the ex-Deputy and a former Colonel knew firsthand, could well be of interest to many. And that’s such a valuable asset left Russia and began to collaborate with the government of Ukraine, which the Russian authorities openly acknowledge hostile. In addition, Denis Boronenkov in an interview with Ukrainian media awareness in the Kremlin and Lubyanka secret Affairs strongly emphasized (e.g., called Alexei Navalny to the FSB). “Navalny has long turned into an effective tool of a certain group in the FSB, through which the business of the clans deal with competitors: first with the public Prosecutor the Seagull, now — Prime Minister Dmitry Medvedev. And criminal cases against Navalny is a fake, otherwise he would have sat in jail. FSB purposefully sculpts the Bulk of the hero”, — assured Boronenkov Ukrainians. To believe this, however, is about the same reason as everybody else of his claims.

Ex-Deputy volunteered to testify in the case against ex-President of Ukraine Viktor Yanukovych of treason. There are enough, and the enemies of the Russian authorities, from the murdered Alexander Litvinenko and Boris Nemtsov to Boris Berezovsky, die with their boots suspiciously often. Denis Boronenkov, who assured that he opposed the annexation of Crimea, were not averse to war in the ATO, testified at Yanukovych, it is easy to write on the number of victims of the Russian regime, which the herbivores is no different.

The strongman with a secret

Russia has countered that the Ukrainian point of view. Boronenkov in the Russian propaganda is also a symbol, but with a different sign. It was a year ago “sectarian child” MP from the Communist party and representatives of the ruling party in the state Duma Maria Maksakova was the topic of many news stories and personified the Crimean party consensus, and the Denis Boronenkov fought games. Last week in the news stories about the former MP spoke as a traitor, and against him was a criminal case of fraud. Alexei Navalny before fleeing Boronenkov found in the former Communist five apartments and a massive fleet (“Bentley”). Russia’s official media and Pro-government politicians also cite the murder of Denis Boronenkov, which don’t look so implausible. While working in the Federal drug control service of the ex-MP is not shy and not the most legitimate methods of interaction with the business, tried to “resolve issues” on the initiation and cancellation of criminal cases, in addition, during the break between the FDCS and the state Duma, he managed himself to be a merchant. Could former partners to be offended by Boronenkov? Could, why not, but Ukraine has not provided security to the valuable defector — version (especially for Russian viewers) is quite plausible. Not the most honest former strongman had acquired for itself the mandate to extend it failed, left the country, but the enemies caught him and abroad. All this fits into the view as a Russian citizen, and even a little familiar with the situation in Russia and Ukraine Western policy or expert: Yes, it can be.

The agenda and history are thrown more exotic: for example, the assumption that Boronenkov revenge could kill the former civil husband of his wife Maria Maksakova, authoritative expert Vladimir Tyurin. Conspiracy is also a place. “We have to understand that this diversion could think SBU under the guidance of the CIA,” hastened to declare the Communist party leader Gennady Zyuganov. Surprisingly, not yet gone in the course of the assumption that Boronenkov killed offended by the vote for the Crimea Ukrainian patriots.

If the murder of Denis Boronenkov will not be disclosed, in the minds of the world community will still stick: to blame the Kremlin. And Vladimir Putin, and Sergey Lavrov, and numerous deputies and senators, law enforcers, and the rest of the Royal cavalry for too long has created a brutal image of a violator of all the vowels and unspoken rules of international cohabitation: the forces should not be ashamed, “we will find it and soak in the toilet”, “the main thing — the essence released by the hackers of information about the democratic party of the United States”. Took the opportunity and took Crimea, in the Donbass war is not known whence undertaken “volunteers”, just retired from the army. Of course, in General terms, and official statements by the Kremlin always innocent, but always follow an unambiguous wink: “We would, of course, I could, if I wanted to, and to Kiev in two weeks to come.”

The Kremlin creates the image of the evil trickster, who for the sake of correcting an unjust world order may violate any of the border. To promote this image did not need services of a renowned PR agencies. Western politicians attempts of such influence admit about the attacks of Russian hackers, for example, says the presidential candidate of France Emmanuel macron. More recently, in the Kremlin, these statements were perceived favorably: afraid — means respect. “Did this Russian” — this meme became popular abroad. But that same fear creates problems: afraid of something, maybe fear, only respect? Any trouble and misadventures can now safely blame on Russia, which itself took on this role. The death of Denis Boronenkov fits in a vicious line instead to remain silent in response to the strange excesses of Petro Poroshenko in the first hour after the murder, determine the culprit, the Pro-governmental Russian sources began stuffing different, even strange versions. Justified — so guilty; this impression is enhanced and the background of memories of the downed “Boeing”. The first days after the disaster, official Russian sources were given obviously improbable version about Ukrainian fighter planes, then fighters, then “the beeches”. The fan version, published after the murder of Denis Boronenkov, especially to outside observers unfamiliar with the complex biography of former MP, is pushing to agree with the usual story about the opposition and the Kremlin, even where this may not be enough grounds. The events of yesterday to the Kremlin, it seems, the lesson did not.