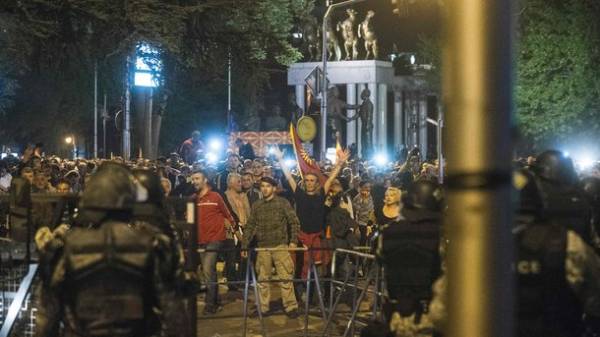 Russia calls for an end to outside pressure and allow the responsible political forces of Macedonia to determine the country’s further development. This is stated in the comments of the Department of information and press of the Russian foreign Ministry, reports “RIA Novosti”.

“Deeply concerned with the recent developments in the Republic of Macedonia. 27 APR losers of the parliamentary elections the opposition actually made an attempt to seize power in the country, the initiative of electing the Chairman of the Meeting (Parliament) with a gross violation of established procedures. In the ensuing scuffle with the participation of demonstrators, speaking out against the “impostors”, there are victims, some of whom were hospitalized”, – reported in Department.

The commentary notes that “the official representatives of the European Union, ambassadors of several European countries and the United States immediately welcomed the “new Chairman” of the Parliament, by the way, the former field commander provanskoe so-called “national liberation army”.

“In this situation, an adequate solution can only be found by vnutrisosudistogo dialogue within the constitutional framework. It is necessary to stop any external pressure and allow the responsible political forces of the Republic of Macedonia to determine the country’s further development”, – reported in Department.

We will remind, supporters of the former Prime Minister of Macedonia Nikola Gruevski on Thursday, April 27, after the storm invaded the Parliament building of the Balkan Republic and attacked the opposition forces. Last tried many months to stop blocking the election of a new speaker.

Protesters attacked the police and deputies began after the social Democrats and parties representing the Albanian national minority, elected the new Chairman of the Parliament ethnic Albanian Talat Xhaferi. It is also reported that the leader of the social Democrats, Zoran Zaev, was wounded in the attack.

The political crisis in Macedonia lasts from December last year. The ruling conservative party and the social Democrats can’t agree on demands from ethnic minorities against Albanian as a second official language, said the news Agency AP. Political force Gruevski won the elections in the winter, but was unable to restore coalition and appoint a government.