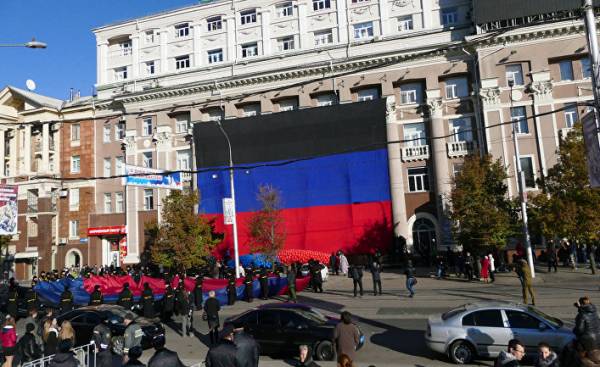 Donbass for Russia — the proverbial suitcase without a handle. Carry harder, and to give back Ukraine on its own terms not out. Therefore you have to constantly test the waters and look for new options, studying the response of not only Ukraine, but also other participants “channel four”.

The next wave of discussion of the next “Putin’s plan” in the Donbas began with the recent publication of Bloomberg. It was about the real Putin’s strategy in Ukraine — “the complete separation of the two border region through gradual integration of them in Russia.” Citing its sources in Moscow, the publication notes that neither the annexation of the Crimea, nor to formally recognize the puppet “Republic” right now, the Kremlin does not intend to. However, will work to integrate the economies of the “LNR” and “DNR” with the Russian economy. Supposedly, this will reduce the cost of subsidizing the occupied Ukrainian territories.

As evidence of such long-running plans Bloomberg recalled the recognition by Russia of passports issued in ORDA and promises of the Kremlin to ease the inhabitants of “LNR” and “DNR” for Russian citizenship. However, such evidence looks very flimsy, considering that in the fourth year of the annexation of Crimea, residents of the Ukrainian Peninsula in 2014, happily met “polite green men” with the Russian flags still do not feel themselves full-fledged citizens of the Russian Federation, even having on hands of the passport with the double-headed eagle.

For example, in early March, 2017, the network got a video in which a woman with Russian citizenship and residence of the Crimean (Yalta) tried unsuccessfully to purchase mobile phone credit. Each of the stores that were frequented by shoppers, in spite of several partner banks, providing consumer loans, she was denied. Some consultants shops referred to certain restrictions on the banks, others frankly admitted — “Republic of Crimea”, referred to as a registration in the Russian passport, are simply not recorded in the database of Russian banks, not wanting to fall under Western sanctions because of Crimea — not Russia. On the question of the Russians with the Crimean residence “Crimea’s not ours yet?” some consultants answered: “it Turns out that no.”

Thus, ostensibly Russia’s recognition of the alleged documents issued by its controlled bandits in Donbass, in reality, means nothing. And for those who are in the “DNR” and “LNR” feel themselves as full citizens of the “Republic”, we can hardly hope for the best, rather than to “citizens” of the Crimea, attitude and a different reaction to the “passport”, which is outside of the occupied territories in no more than a simple piece of paper.

In the Kremlin, by the way, from plans, announced by Bloomberg, disown. But this does not mean that Moscow is calling “L/DNR” exclusively “domestic problem” is they are not bears. This, in particular, by the “mood” of the Kremlin puppets, the same “leader of DNR” Alexander Zakharchenko. For example, trying to “provisional government” destroyed and looted Donbass Ukraine, by holding in the occupied territories “elections”, Russia (and wrote about this more than once), including, considered a return to us because of the curb of Viktor Yanukovych, started all this mess, as well as a number of members of the former Party of regions trying to gain a foothold and settle in Russia. Naturally, all the levers of control of these territories remained in Moscow.

These plans announced himself fluent ex-the President of Ukraine, which, from time to time, produce to communicate with the Russian press (without witnesses and, moreover, without video of these meetings). “Of course, we all dream to return home to participate in the restoration of normal life”, — he said at the end of February 2017. Mol will achieve the “beginning of the restoration of the destroyed Donbas, my homeland where I was born and lived for more than 50 years.”

But just to throw this ballast Russia has failed: these plans angered the other, the Kremlin-controlled thugs — the current “leaders” of Donbass. Zakharchenko even burst into an angry speech, called Yanukovich a traitor, and said that the entry for him and others “regionals” to a young “Republic” ordered. But given that Zakharchenko is as a dependent figure, like Yanukovych, it is possible that dreams of one and the sharp reaction to them another — a well-played party, to feel out the situation.

Since applications of these “Donbass leaders” in Ukraine, no one noticed and even if noticed, would not have taken seriously — Putin’s plans again underwent changes, of course, transforming and rhetoric bandits “DND”. So, on Monday, April 24, Zakharchenko, before once again promised by may 9 to take Kiev, he suddenly stated that he is ready to engage in dialogue with Ukraine on “the existence on the confederal basis.” And to start this conversation offered “now”. Such statements mean absolutely nothing.

“Zakharchenko is a parrot repeater. He receives instructions from Moscow, or just “staff” sits a man from Russia, which gives an introduction, which should be spelled, and he voiced them,” recalls political analyst Alexei holomuzki. In his view, apparently, Russia has no specific plan for what to do with the Donbas. “Politics in Russia is now determined by the principle that those who last came out of Putin’s office. There are supporters of the annexation of Donbass to Russia, there are supporters of his return back to Ukraine on certain conditions, there are supporters of the transformation in Transnistria. Each of them it gives you the opportunity to take the budget money on some projects,” he explains.

However, to solve the question of Donbass in one week: “Russia simply withdraw its troops and “evacuate” those who want it, to Russia.” “But I don’t see any willingness in Russia just like it to go. Moreover, that still doesn’t solve the problem of the Crimea and sanctions (they started with Crimea). This is a serious violation of international rules, so now all international negotiations are tested in the Crimea”, — said the analyst. For Russia this means that, while there is Crimea and the Donbass will be. “Unfortunately, until you resolve the issue with the Crimea, Donbass will be their trump card,” — said golobutsky.

In turn, political expert Olesya yahno-bilkivs’ka agrees that Russia today “is still no pretty way in the Donbas.” “The logic of military blackmail, which, most likely, expected Russia and Ukraine to impose the legalization and legitimization of what was happening in the self-proclaimed “LNR” and “DNR” failed… today, none of the Western partners of Ukraine does not impose the need for any policy changes without real demilitarization of the region. The logic of Russia has not worked,” she says. On the other hand, to retreat, given that in 2018 Russia will face presidential elections, the Kremlin. “Therefore, unrealistic view of the situation in Ukraine, voicing some ideas about Confederation, is nothing more than an attempt by the Russian authorities to create a certain impression in Russia that Moscow still holds the fear and the Ukraine, and the West, who’s about to give in,” she said.

Thus, in fact, the main Putin’s plan now is to stall for time. Russia was counting on the change of the political elites, first in the United States, now in several European countries, mainly France and Germany, where this year the elections are held, to understand with whom and how to bargain, trying to change, for example, some of his concessions in the Donbass concessions to other geopolitical players on Syria. In parallel with this waiting, the Kremlin continues military blackmail. That is why Russia gathers its military power not only on the border with Ukraine, but also Belarus and Baltic States.

In Moscow, explain it exclusively in the preparation to the Russian-Belarusian exercises “West-2017”, which will be held next fall. However, military experts do not exclude possible provocations. In particular, the secret services of Lithuania argue that in a scenario such exercises can be incorporated in an armed conflict involving NATO and allow provocations. According to Lithuania, to strengthen its military capacity in the Western part of the Russian Federation and in the Kaliningrad region, allow the Kremlin to launch military action against the Baltic countries in 24-48 hours. Suspiciously to the so-called teachings are with us. Speaker of the Verkhovna Rada Andrew Parubiy and NSDC Secretary Oleksandr Turchynov believe that the “West-2017” can be used for direct aggression and acts of sabotage against Ukraine.