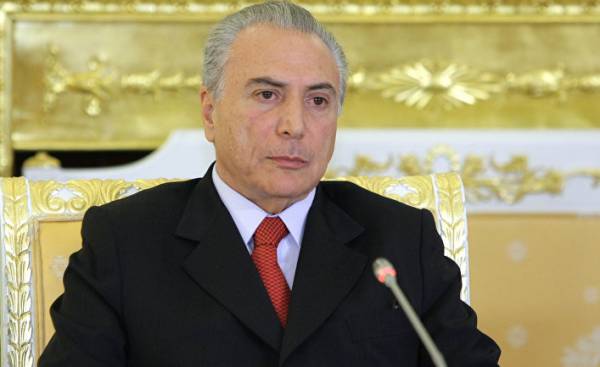 Eight Ministers, President Michel Temer became the defendants launched the Supreme court of the investigation, thereby adding to the long list of his associates who began the operation “car Wash”.

On 16 April, the President of Brazil Michel Temer held a meeting at the Alvorada Palace. His face was grim, but he kept right on like nothing happened. The main theme of the meeting was the pension reform, unpopular, but very unimportant for the government measure.

After the shock of recent revelations of “operation car Wash”, which is discredited virtually the entire old political elite of the country (the suspicion of corruption, money laundering and other offenses), the President tried to regain the presidential status, the image of a reformer, able to save themselves at the edge of the abyss.

Unable to reach 10% of rating information in exchange for leniency recognition of the company’s management, Odebrecht, belonging to the largest in the country’s history of corruption scandal — not a head of state ever looked as illegitimate.

The street is silent

Eight of his Ministers have become involved in initiated by the Supreme court of the investigation, thereby adding to a long list of associates who have become targets of “operation car Wash”. He himself had hastily to release a video refuting statements Odebrecht on the financing of his campaign and the Party of the Brazilian democratic movement.

Anyway, despite the graffiti “Down with the Temer” on the walls of são Paulo, Rio de Janeiro and Brazil, no one even thinks about the early care the former Vice-President, Dilma Rousseff. “Temer is best suited to lead our country until elections in 2018”, — wrote in late March, Elihu Gaspari (Elio Gaspari) in published in Sao Paulo newspaper Folha. In other words, he is the lesser of two evils.

Nearly a year after the impeachment of Dilma Rousseff Brazil is afraid of chaos. The political successor of Luiz inácio Lula da Silva, was removed from power by Parliament, which claimed to save the country from the President of mired in the scandals of the workers ‘ Party. Now they themselves are suspected of bribery, with at least six-figure sums.

However, if yesterday on the streets and there were massive protests against corruption, which were associated PT, today people are silent, and parliamentarians on their best behaviour. The height of cynicism, Brazilian media reported on the existence of collusion (the participants themselves deny everything) Michel Temer, former President of the social Democrat Fernando Henrique Cardoso and their pseudo-rival, the former head of state Lula. The political elite is United against the “Carwash”?

Justice spare the current President. This is evidenced by launched 4 APR hypocritical process in the Higher electoral court, which must confirm the legitimacy of funding the presidential campaign of the tandem Dilma Rousseff-Temer Michel in 2014. If the use of “black funds” will be confirmed, as indicated by the recognition of the former Director of Odebrecht, judges will have to revoke the mandate of Michel Temer.

Apocalyptic scenario: to perform the duties of the head of state should be the speaker of the lower house Maya Rodrigo (Rodrigo Maia), who is suspected of receiving from Odebrecht 350 thousand reais (660 102 thousand euros) for the financing of the party “Democrats”. For further action from the experts on Brazilian law, there is no consensus either need to hold early elections, or Congress, the majority of whose members were involved in the “car Wash” to elect a “buffer” of the President until 2018.

Both options are not encouraging. Potential candidates to participate in live voting involved in the “Wash”, and indirect election would look like as a “parliamentary coup” a year after the controversial impeachment, the political scientist Mathias de Alencastro (Mathias de Alencastro).

In such a situation, the judges decided not to decide and postponed a verdict indefinitely, justifying this by the need to hear suddenly became extremely important testimony. “We’re not here to waste time,” — said at the opening of the hearing, a judge Luciana, Lossie (Luciana Lossio). “Judges here is to waste time — I do not agree with it Ricardo Rangel (Ricardo Rangel) from the newspaper Globo. — If the decision is made, the mandate of Temer will be immediately cancelled. But what judge will dare to take responsibility and plunge the country into uncertainty and confusion in the midst of a severe economic recession with 13 million unemployed?”

Brazil is afraid of the vacuum. The lack of political alternatives and the fragility of the national economy play into the hands of Michele Temer. The current head of state, who in his time complained, that was only “decorative Vice-President” when Dilma Rousseff, promised not to back down and urges MPs to form a United front.

“The country is definitely a serious problem, he said at a meeting with parliamentarians alarmed by April 18. — There are different questions that try to tarnish the political class. We have to give this back. I will fight until there is strength.” “Being in the epicenter of the earthquake, sit back and wait until things calm down” — sums up the blogger Luis Nassif (Nassif and Luis). Brazil, apparently, doomed to wait, even at the cost of confidence in its institutions and dignity of its President. 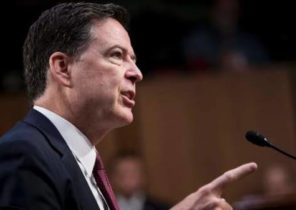