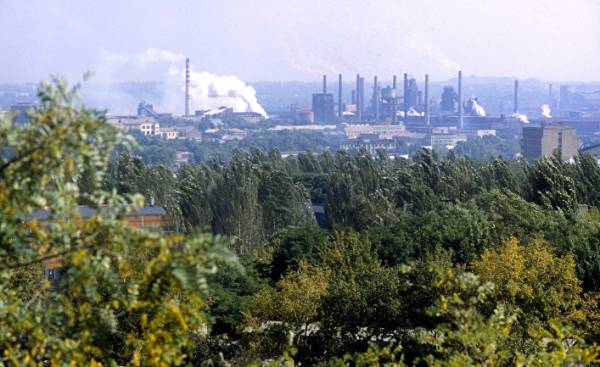 We live in a very interesting and challenging time. Ukraine is now at a choice point that will determine the path of development of state institutions, economy and society over the next few decades. The state has a unique opportunity to make a qualitative leap. If not — we expect a “swamp” without development.

The loss of Crimea and the conflict in the Donbas was hit hard by the economy. To build up lost time, we should grow very rapidly. Ukraine today is reminiscent of the situation Alice in Wonderland: “you Have to run faster just to stay in place, and in order to get somewhere, you have to run at least twice as fast”.

Why? If the economy doesn’t grow at a very rapid pace, there is a danger of creating in Ukraine the raw model of the economy. Tendency to this can be seen in the change in the structure of our exports. Therefore, we must act according to the principle of “change or lose”.

Yes, there are also positive moments. In the same agriculture is growing the export of products with high added value, such as, sugar, butter or certain types of finished products. This long-term trend, given the intensification of our exporters in foreign markets and non-traditional for Ukraine geographical areas. We managed to keep the overall share of machinery in total exports and this is extremely important. Notice that this happened, despite the loss of a significant number of important companies of the sector in the occupied territories. But we should not close our eyes to the growth of raw materials in the Ukrainian export. This is not a trend in recent years. This trend has actually formed after the crisis of the late “zero”. To change it we must.

What are the raw model of economy to the state?

“A raw needle” for the economy is a drug that acts ruthlessly and inevitably kills the future of society. Economic threat is obvious, is:

— technological regression and the transition to total dependence on foreign technologies and productions;

— low level of investment in the economy;

— dependence on a conjuncture of the world market of raw materials, which makes the model dependent on external cataclysms;

— low level of economic growth and its strategic futility;

— scientific progress becomes a catalyst of change and a threat to the economy. In some cases, this same what to build the economy on the production of oats and hay for horses when someone has already invested money in manufacturing cars.

Social threats are less obvious, but more painful for development. This:

— high unemployment and labor migration. At the same time leave will be the most qualified and active part of the society;

— reducing the level of colonization of territories, the problems in the cities, which previously focused on production;

— reducing the level of filling the pension Fund and the collapse of the system;

— reduction of the level of education. Along with high unemployment and low income levels will lead to a significant level of crime.

Once again, that today we do not go towards the creation of a raw model of the economy. We are at a point of choice and in the absence of reform, we expect this model.

Way of the tiger

We have the ability to go the opposite way. This is a qualitative leap that will allow to create in Ukraine the model of “economic tiger”. That is, an economy that is growing very rapidly, both in numbers and in quality. In the world there are a significant number of such examples, in Asia and in Europe. There is no universal recipe — this is a completely different country. But several factors that are common to all, yet can be distinguished.

The first is the internal factor of the reforms. Somewhere in the ease of doing business, somewhere- an effective fight against corruption somewhere — the destruction of administrative obstacles, where the creation of a “green light” for investors in certain territories or in areas where some tax reform.

The second is an external factor. Stars should be so that the situation on the world market should be favourable for investors and for exporters. But in any case, the country needs to be very tightly integrated into the world economy. Without this integration won’t work no single internal factor.

The third social factor. For the period of the economic miracle necessary internal consent and appropriate action for revitalization in education, raising the level of tolerance, increase in economic activity of the individual citizen.

All these three factors very rarely superimposed on one another and that is why the emergence of an economic tiger is a very rare case which is not a common trend. Today Ukraine has a wide window of opportunity. Yes, we have significant problems, but none of them are those that cannot be solved. But this window of opportunity is not forever. You need to use it here and now. The time factor, as in the case of a threat to build a commodity economy is extremely important. Time for Ukraine to lose no.

Due to what the tiger can jump?

Traditionally, when talking about the possibility of Ukraine in the first place, remember about the natural capacity of the soil, the mineral deposits and the like. This approach lives in our political tradition for decades. Want to take a sober look at it: we are talking about building a system on the resource base.

If we are talking about building a new type of Economics, we need to abandon this losing paradigm and focus on the values and sectors that to date have long formed the economic development agenda throughout the world.

We need to understand one simple thing: the first and most major challenge is human capacity. An educated, active, and technologically advanced society is a major factor in development. Israel exports to Ukraine vegetables, although is not black and our huge reserves of water. Ireland has a significant resource potential, but this does not prevent her to “turn around the” resource-rich commodity economy.

Ukraine has a significant layer of the educated and technologically advanced population. At the same time wages in manufacturing today is 1.2 dollars per hour, which is 2 times lower than in China. It is possible to assess this phenomenon negatively, and you can see it as an opportunity. More: 62% of the adult population uses the Internet. Civil Society Organisation Index is 3.3, which distinguishes Ukraine from its neighbors. For 10 years we have demonstrated a twenty-fold increase in the export of IT products. The current economic situation resembles a slow start before a possible breakthrough, the devaluation increased the competitiveness of our exports.

The FTA with the EU is just beginning to operate at full capacity and provides a unique opportunity to build new businesses in Ukraine. Europe is a large and rich market, which want full and more deeply to visit many companies in the world, especially when it comes to Asian companies. Ukraine is interesting as a production site, which will operate on the EU market. This applies to many industries. But in any case it is not about raw materials or semi-finished products and products with high added value. Thus, it can be and work on foreign raw materials. The presence of ports and developed transport infrastructure allow for the development of this direction. Investment “under the EU market” as from Asia and most of Europe is extremely beneficial for Ukraine. This additional production, new jobs, and increase exports.

The markets of “third countries”, which will be for our exporters through in-depth cooperation with the EU is another additional incentive for investment. Ukraine is changing the nature and structure of production, which focuses on a new standards. If we look at the statistics of our exports, we can see that the main growth accounts for the European Union and the markets of Asia and Africa, which few years ago were inaccessible and incomprehensible for Ukrainian exporters.

Thus, Ukraine has all the possibilities in order to account for the formation of new industrial sites under “export” to create a new model of the economy. But now we have a situation where most investors took a waiting position. And in Europe, and in Asia, many large corporations understand all the positive aspects that brings them business in Ukraine. But doing only the first cautious steps. It is very important to keep these sprouts of trust and multiply them. As soon as Ukraine will be a few dozen of successful cases from iconic companies that are clearly working in the areas I mentioned, we expect the effect of “snowball” for investment.

What you need to do in order not to miss the chance?

1. Strategic failure from a resource model development and legislative incentives for the processing and high-tech industries should be the basis for economic policy. Moderate dirigisme in this context will be useful. A good example is the export of oil instead of sunflower seeds. This was done solely due to the position of the legislators.

2. Effective fight against corruption. The full potential, which I wrote before, not worth a penny if the country will be perceived as corrupt courts. It seems to me that in a country like ours, the hard methods of struggle are necessary, but not enough. Efficient construction of e-government, where decisions are taken not by officials. Clear and simple algorithms with minimum contacts is the future. E-government and the use of modern it technology is the key to building a transparent, anti-corruption, modern system and good signal for global big business.

3. The simplifying the business as a “green light” for investment. Today Ukraine holds the 80th position in terms of the ease of doing business. In order to receive building permits, we are at 140th position for connection to the power supply system 130, tax on 84th, international trade at the 115th. I just listed a list of items without significant progress which you can forget about building new businesses with foreign investments, which would be export-oriented.