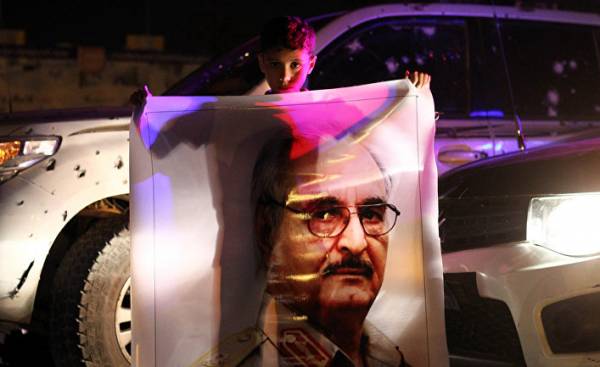 The US President Donald trump has caught the Libyans by saying that he sees his country in Libya, justifying this thesis is the fact that currently the US is too busy on other fronts. Washington’s role limited to “fight against ISIS (banned in Russia — approx. ed.)”. That statement stunned the Prime Minister of Italy Paolo Gentiloni, who met with Donald trump in Washington told the American President: “I think there should be one clear strategy for the region. And we need countries such as Egypt and Tunisia, which are close to Libya, and therefore we need a stable and United Libya”. He added that America’s role in this is crucial.

Position trump’s not convinced the European allies of the United States, because it is, in their opinion, reflects the blindness of the US strategy, which has led to huge changes in the world in favor of powerful competitors, primarily Russia.

While trump has decided to turn away from Libya, Moscow has expressed the desire to play a key role in the development of future Libyans. Moscow is not limited to the support of the Caliph Haftarot militarily and politically, since it is impossible to resolve the crisis, working only to one side. So it works with all the forces operating on the territory of Libya, starting with the Faiz Saraga and ending with the leaders of the Islamists, who were part of the delegation from Misurata, who visited Moscow last week. At that time Washington still hesitates in defining their attitude to the Islamists of Libya. Russian President Vladimir Putin has decided to pursue a policy of “openness” in relation to all of the forces acting on the territory of Libya and to try to “tame” them, with the aim of integrating these forces into a political project that will control Putin.

In this regard, Deputy Minister of foreign Affairs Mikhail Bogdanov expressed Russia’s willingness to take the necessary measures to establish national dialogue between Libyans, as Russia believes in the unity of Libya and the need to restore a strong state, due to the fact that it is the only way to defeat terrorism.

Since America has departed from Libya, for Russian diplomacy was the opportunity to use this chance to fill the void. Even if we are talking about building bridges with some of the Islamists who are willing to deal with Moscow, and pose no threat to Russia and its interests. It seems that the Libyan Islamists, such as the “Muslim brotherhood” and the like, I realized that I wanted to participate in the political life of the country, as did the movement of “An-Nahda” in Tunisia. This means that pragmatism has started to change the ideology of the movement “Muslim brotherhood” and parties of the Islamic trend. There is also a hostile attitude to Russian policy in Syria, but when it comes to what is happening in Libya, they are willing to cooperate with Moscow, partly to secure its interests. But politics trump’s covered with my favorite slogan “America first”, in the end, could push the Islamists or their part to cooperate with Russia.

Putin is trying to adjust its role to avoid involvement in the ideological struggle with the panislamists because of the support of the regime of Bashar Assad in Syria. For this reason, Turkey and Iran as partners of Russia took over the role in shaping the future map of Syria. In addition, trump expressed interest in supporting the Egyptian regime, but has not announced a public fight “fellow Muslims”. Despite the fact that his relationship with the “Party of the Renaissance” did not become stronger, he said he is open to cooperation with his leadership, while the Putin administration is still looking for suitable ways to deal with it, avoiding to engage in direct confrontation, as she is interested in some of the local parties. Will there be the next phase in the intersection of the interests of Moscow and the Islamists? This feature is not haunted by the Europeans who have made significant efforts in recent years to support political Islam. They are not willing to allow Trump to destroy everything that was built over the years in exchange for his mysterious strategy.