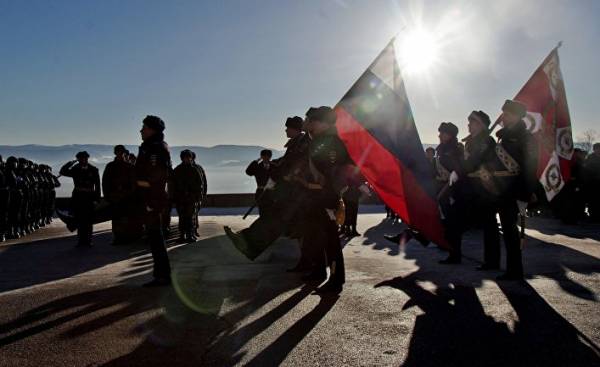 The candidate in presidents of France Francois Fillon in an interview with LeFigaro reported that “it is useless to say that Russia needs to leave Crimea, this will never happen”. This Fillon said, not only as Givens, but as objects quite fair, justifying the Russian annexation of the Crimea priority of people’s right to self-determination over the principle of inviolability of borders, because, in his opinion, the boundaries can be unfair.

In the first round of the presidential race Fillon played Him and marine Le Pen, now, according to all forecasts, the President of France a macron, people with fundamentally different views. But, nevertheless, the fact that the presidential candidate of one of the largest countries in Europe willing to publicly acknowledge the validity and legality of the annexation, forces once again to reinterpret the fate of Crimea. The problem is not that the mind of Fillon, and that these views are shared by 40% of French who voted for him and Le Pen, which has the same views on the Crimea.

Event from a completely different number, but with the same “stumbling block”. The lolita Milyavskaya was taken off the train, forbidding her entry to Ukraine due to the fact that it is two years ago he toured in Kerch, having driven there, of course, from the territory of Russia, thereby violating Ukrainian laws. Singer Lolita hurt, because she was going to visit the child who was ill. Therefore, the singer Lolita wished the Ukrainian authorities to the same prohibitions on entry to favorite US and Europe.” That is, the singer Lolita and the candidate in presidents of France Fillon believes that “Krymnash” is forever, and the laws of Ukraine do not mean anything. Because a General can have laws of some of Ukraine. And is there such country at all? I’m trying to transfer the contents of the turbid substance, which is called the representation of the Russian elite about the world and its surroundings.

The fact that the Russian officialdom says, “all the Russian Crimea!”, — that’s understandable. He, officialdom is still repeating? Puzzling, when from the same background come the representatives of the Russian democratic opposition. About “craneboard” everything is a hundred times discussed. There has recently cropped up again the idea of holding new, really fair referendum in Crimea under supervision of the international community. So it was final, the actual referendum, armor.

That is, the representatives of the Russian democratic opposition also come from the same three prerequisites that Francois Fillon and singer Lolita: “Krymnash” — forever the people’s right to self-determination is absolute, and the laws of Ukraine to respect the do not have.

Leave for special ethnographic and anthropological analysis of the question of the legality of the use of polysemantic term “people” against the population of Crimea. Obviously, if we talk about the importance of the political in which the word “people” is synonymous with the term “political nation”, no “people of Crimea” does not exist, because in that sense people call it the population of certain countries, States. The term “people of Crimea” in the ethnic sense of cultural history and linguistic community is also questionable, because in Crimea live different ethnic groups. In this sense, in the Crimea there is the Crimean Tatar people, there are representatives of Russian, Ukrainian and other peoples, and the Crimean people as a single ethnic group there. Therefore, the principle of “the rights of the people (nation) to self-determination” already not universal, in relation to the Crimea is extremely controversial.

Nevertheless, there is a problem. It is certainly not in the “referendum” at gunpoint, who like to flaunt Russian politicians and their underlings, and that the moods and destinies of two millions of people to neglect a rash.

But this problem in no way solved a new Crimean referendum, which will be the obvious way to be consistent with the laws of Ukraine and current laws of Russia. According to Ukrainian legislation, such a referendum is possible only on the territory of the whole country, and under the current laws of the Russian Federation the question itself about the fate of Crimea is a criminal offence. Then how?

All the talk about the future fate of Crimea can go into practice only after the change of regime in Russia, which inevitably will mean a change of information policy, the termination of the indoctrination of the Russian population and the population of occupied Crimea. The return of the Crimea to the Ukraine is the goal to which they must seek those policy of Russia and Ukraine, which want the good for its countries. Not be well with the Russians until they return the stolen. Will not the good people of Ukraine, until it will bleed cut off the Crimea. (Another problem is the Donbass, but it is necessary to speak separately).

The program of the democratic Russia against Crimea should consist of two paragraphs. 1. The recognition of the annexation of Crimea is an international crime, responsibility for which lies with the leadership of the Russian Federation. 2. The recognition of the Crimea the territory of Ukraine, and the announcement of all normative acts that perpetuate the Russian status of Crimea, including the relevant amendments to the Constitution, null and void, and therefore subject to cancellation.

In public Russian politics at this stage, it is preferable to put a period after those two paragraphs. Then begins what can be responsible to speak only once it becomes clear how is going the dismantling of the Putin regime and in what condition then would be Russia and its economy. Obviously it is impossible in the 21st century, mechanical “ship” Peninsula with two million women and men, as a ship consignment of furniture. The annexation was enforced entropic process, so like any process of destruction, it could be held in the special operation mode, practically in one day. The reverse process will inevitably be more time-consuming. It’s always harder to build than to break.

It is obvious that all costs of this process, including relocation and resettlement on its territory of those residents of Crimea who do not want to live in Ukraine, should take democratic Russia. Just because we, not the Ukrainians, brought or made the coming to power of Putin and his gang, and therefore must answer for his crimes.

It would be naive to think that the Ukrainian politicians the process of the return of the Crimea will not require any effort. Most importantly, that life in Ukraine has become attractive, then the inhabitants of the Crimea will accept the return of Ukraine not only as restoring the rule of law, but also as a personal benefit. But it is important to emphasize that this is entirely the problem and the responsibility of the Ukrainian authorities, and in no way can not be, and a precondition for the return of stolen Crimea.

Inevitably, the question arises, what if the mood of the majority of inhabitants of Crimea will remain a Pro, if you want to be a part of Russia will be enough to resettle all would be impossible and unfair to require people to leave home and familiar way of life. Democratic politics is only one solution to this issue: to help people become citizens, to explain that the right to self-determination is achieved in the political struggle. By electing deputies to the Verkhovna Rada. By requiring an all-Ukrainian referendum, or the requirements of changes in legislation of Ukraine on the referendum or on the status of Crimea as part of Ukraine. It’s a pretty difficult path, and it is possible that down the road many will change their minds and decide to stay in Ukraine. But it will be an internal affair of Ukraine. Russian policy in this case will have the full right to demand from Ukraine and from the international community to ensure the rights of those legal means seeks changes in the status of Crimea.

But it’s all in second and third place. Now the important thing is to clearly and articulately to announce the first two paragraphs of the program for the return of Crimea to Ukraine. And to the point. And all the ideas about the new “final” referendums and other “sandwiches” out of my head. Preferably forever.

The crown Prince of Saudi Arabia, we can for three days to destroy Russian forces in Syria