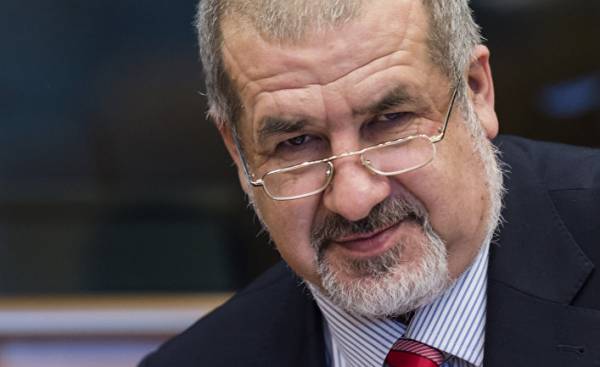 Putin may yet seriously started to Latvia, positively evaluating the overall prevailing social peace in the Latvian society, think about its causes, the head of the Mejlis of the Crimean Tatars (banned in Russia organization — approx. ed.), Deputy of the Ukrainian Rada Refat Chubarov. Family born in 1957 in exile in Samarkand Refat returned to Crimea in 1968, but after graduation in Moscow to the Crimea is no longer allowed. In 1983 he started the Latvian stage in the life Chubarov. From 1984 to 1991 he was Director of the Central archive of the October revolution and socialist construction of the Latvian SSR, from 1988 to 1990 — President of the Latvian Association of national cultural societies, from 1989 to 1994 — Deputy of Riga city Council faction of the popular front, and then returned to the Crimea. Realized after Putin’s annexation of Crimea Refat again forbidden to go there, but he is confident that someday it will happen, and sees the important mission of Latvia in approximation of fair victory.

Diena: You were born in exile in Samarkand. Parents told you that in the Stalin era happened with the Crimean Tatars?

Refat Chubarov: In every family of the Crimean Tatars have always said that we are in exile and must return home. When we became older, around 4th grade, parents took us with them to the meeting of the Crimean Tatars. There collecting signatures, and the petitions were taken to Moscow. Then the parents told us the details of the expulsion.

But most of all, the parents were told about the Crimea, and these stories were so beautiful that I had before we got back there (my family was in Crimea earlier — in 1968, when I was 11, and de facto, the Tartars began to return to Crimea only in the late 80-ies), impression that the Crimea is something like Paradise. I don’t know what Paradise, but I imagine that there are mountains, forests, rivers and lakes, many animals, they all graze together, and no one attacking… When we are on the way from Samarkand crossed the Kerch Strait and ended up in Crimea, I saw the salt flats — the black, dusty ground and sharp grass in some areas. Our senior men ran away into the field and began to kiss the ground.

I was surprised: it’s not the Paradise that I imagined! Approached the father, saw his tears and asked what happened. The father said, kiss this land is our land. My parents told me about my childhood and they grew up in the mountains, where there really is a forest and wild animals, although not more than in other places. In my mind all these beauty focused.

— If I were from Mars, I might ask you: when the Crimean Tatars were better off in Ukraine or Russia?

— I would say that in the world everything is relative, but the freedom-loving Nations can’t be worse than in Russia. Anyway, all I know of countries, only Russia oppressed entire peoples who want a decent life.

— The annexation of Crimea was a surprise to you?

— For me it was a complete surprise. Moreover, on March 18, two days after the illegal show, which they called a referendum, I still thought that Russia will create in the Crimea the situation is similar like in Abkhazia, and will trade with Ukraine and the international community over Crimea and around it. However, it turned out that Putin — is quite other ideas about his future relations with the world. He cut off his escape route and herded into a dead end, annexing the Crimea and including it in Russia.

— So Putin cornered himself?

— You can only guess what the cynical scenarios arise in the mind of Putin, but I think he sometimes regrets that broke all bounds, annexing the Crimea. In my opinion, it would be in the best situation, controlling the Crimea and bargaining for it, but not breaking until the end of international law.

— How Putin could control the Crimea, violating international law? Economically?

— In the Crimea was his troops who were there in accordance with existing agreements with Ukraine. He introduced additional troops, introduced in the truest sense of the word bandits is framed as a different kind of militant structure, for example, the Cossacks. These bandits recruited all over Stavropol and Krasnodar region, the Caucasus. Putin would keep Ukraine on the hook as he is now trying to do with Donetsk and Lugansk.

Why he still chose the option of annexation?

I think the top scored the assumption that the Ukraine would collapse at his feet. Anyway, Putin was convinced that the whole arc, which they call Novorossiya from Kharkov to Odessa and Transnistria will be a Russian or Pro-Russian. Putin, like any predator, chasing a very large and bold piece, but he choked on them — not the stems, so that no longer can occur. It happened at the end of 2014, after Ilovaisk and the big fights at the Donetsk airport. Ukrainian armed forces were able to organize themselves, while the battalion of volunteers held the front, stopped moving forward Putin.

— Maybe Putin is just slow to approach? They say that the first Ukrainian army was indeed close to collapse.

— I March, April and may 2014, worried for the fate of the southern regions. There, with the exception of Odessa and several locations in Zaporizhia region, there was a large Ukrainian centers, mixed composition of the population, many were settled out of Russia after the Second world war. Not sure hesitated whether Putin, but after the Crimea, he was in euphoria and thought that these areas he presented on a silver platter, and may therefore have lost the pace. Today no one will argue that we can only guess which part of the population of Ukraine would enter into a guerrilla war, if Putin had launched an armed attack from any side. But the fact that an efficient army was not recognized by all. One of the public explanations of the military, why Ukraine gave the Crimea, threaten to seize the whole of Ukraine, this is justified by the fact that the Crimea was quickly given.

In Riga pretty much Pro-Putin minded people. In Riga ruled by a party that has a cooperation agreement with the party “United Russia”.

— A few years ago I said in an interview: if I was a Crimean Tatar and did not consider it my life’s mission homecoming, you would have never left Latvia. Arriving in Latvia a young man, I found here a lot of related feelings in relation to the tragedy and internal protest. Present and future of Latvia I care about. Know where the roots of many problems of Latvia that the instability is associated, including the violent change demographic and ethnic composition.