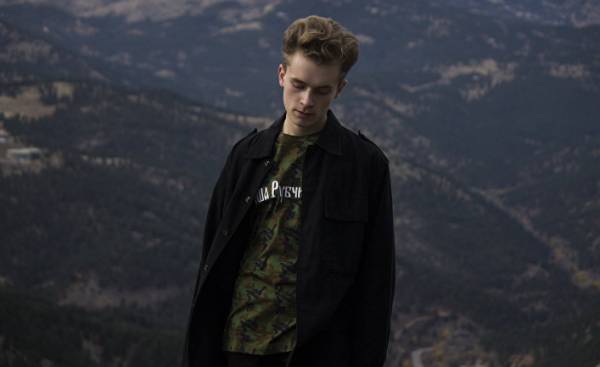 In the Regional center of youth culture Kaliningrad, Russian territory on the Baltic sea — gathered a small group of pale teenagers. It models participating in the fashion show, which arrived one hundred and fifty editors and buyers. Most of the guests gathered from all over the world to see autumn-winter collection of a 32-year-old menswear designer Gosha Rybchinskogo, there are 40 chairs upholstered in faded velvet has sufficed not to everything. Models go from a simple white curtain, and parade, squeaking sneakers on the parquet floor, past a long row of dim mirrors. Their clothing looks as modest as entourage: paramilitary shirt with shoulder straps, sailor jackets, ties with clips, sports suits with Cyrillic inscriptions. Many of the viewers nine hours to get here from London, which this week opened the January menswear shows. The next day they go to a small Kaliningrad airport to catch a show of Ermenegildo Zegna — the first event in the men’s fashion calendar Milan this year. In Moscow they are waiting for an inconvenient connecting flights.

Why these people went on such a journey — especially in the middle of winter? Because Rubchinskiy now is one of the most important names in the fashion industry, and because of the Russian influence on fashion is now so great that it can be compared only with the beginning of the last century, when the world admired the “Russian ballet” by Sergei Diaghilev. Diaghilev ballet seriously influenced not only modern choreography and music, but also on the pre-war fashion. In fact, his suits and became the fashion. To verify this, just look at any book on the subject. In 1909 Paris debut season of the Russian ballet brought in the fashion of bright colors and exotic, in spite of Edwardian drawn to the pastel colors and curvy lines in the spirit of art Nouveau. Paul Poiret was largely inspired by the work born in Belarus by Leon Bakst created the sets and costumes for “Russian ballet”. Bakst was playing with the contrasts of colors in traditional Russian embroidery. The silhouette of the sarafan — Russian folk dress developed in a tunic worn over pants, which in 1912 in the hands of Poiret became a costume for the play “the Minaret” keeping to the hoops on the skirt, a lampshade. Revolutionary, at first glance, the idea of Poiret, who inspired many followers – pure color, harem pants, narrow skirts, and Eastern turbans, Cossack jackets with embroidery and fur trim actually came from the scene of the “Russian ballet”.

The influence of Diaghilev’s ballet has survived long after the collapse of the company, held in 1929. Even almost 50 years, in the late 1970-ies, after it was felt in the “Russian collection” of Yves Saint Laurent. His autumn-winter show in 1976 included the boots with tassels, Slavic embroidery and the characteristic fur hats — the so-called hats. In fact, it was not so much Russian-style, how much fantasy on the theme of Russia — just as Diaghilev ballet idealized Russia, drawing is not a real country, on the verge of revolution, and the beauty of the tsarist past, and romanticised peasants (and serfdom), ignoring the unpleasant current realities. By the way, in Russia “Russian ballet” was not able to speak due to the political instability prevailing in the country soon after the debut of the troupe. In fact, in 1909, in 1976, to fashion Russia as a source of inspiration were just the image of “the other”, allowing to join the romance of exotic destinations and different time.

It may seem that the clothes gosh Rubchinskiy showed in Kaliningrad, goes against this trend. His outfits — Russian, but they emphasized based on reality, not on fantasy. Rubchinskiy pale, shaven-headed — reminds Gopnik, if not for his relaxed smile. It is often mentioned in the same row with Demnos Gvasalia designer Vetements ranked in 2015 the prestigious position of creative Director of Balenciaga, and Lotta Volkova — a stylist who worked with British brand Mulberry with the Italian brand Emilio Pucci. Together, they provide the current popularity of Russian fashion and new ballet dance between the aesthetics of the Eastern bloc and the Western world.

Referring primarily to poverty and strangeness of the USSR, collapsed on 25 December 1991, clothing Rybchinskogo looks like a counterfeit version of Western sports coats. In his latest collection features bright synthetic shirts with the Russian word “football”. They are produced in collaboration with Adidas, but the logo of three stripes with the Cyrillic alphabet creates a specific charm forgery. Rubchinskiy have achieved the same effect last season, when he worked with Kappa, Fila, combining their logo with a recognizable font of their native language. For a person who does not know Russian, these inscriptions seem something abstract, but it does not prevent the inverted jumble of letters ago to be quite recognizable.

Demna Gvasalia does not use Russian letters, but also in its aesthetics has a distinct Soviet flavor: messy layers is too big or too small clothes, awkward proportions, weird materials like faux leather or lurex. They refer to the absurd and old-fashioned outfits that were typical of the last years of the Communist regime, when, as he recalls what a simple pair of Levi’s jeans was the value of mined difficult and not always legal ways.

Gvasalia was born in Georgia, near the Black sea; Rubchinskiy — Muscovite; Volkova grew up in Vladivostok, near the Russian border with China. Her work clearly highlights the aesthetic relationship between her and Gvasalia Rubchinskiy. All three focus on baggy street clothes, synthetic fabrics and bold colours — that is, that I wore in my youth. This style — definitely Eastern European, with a strange attraction to ugly and unusual — does not look high fashion, or rather didn’t look for her until recently. However, it now dominates on many catwalks. Perhaps that is why Volkov is now enjoying such success as a developer of advertising campaigns, fashion shows and magazine styles. So Rybchinskogo clothing is sold in more than 140 stores worldwide. Therefore, what became the creative Director of Balenciaga. This trend has spawned a number of imitative brands (and from the leading European fashion houses, and startups from Moscow) — Russian inscriptions, oversized garments, bold colors and overt aggressiveness. The same aesthetics prevails now in many fashion magazines. “Now Russian style on the crest. It is in the trend. — says Volkova. — For us it’s just what we grew. Now he looks different and very modern.” Images that creates the trio, is not consciously constructed clichés about Russia, and memories of my own experience of teenagers of 1990-ies. In fact, it is a reflection of their personal reality, as memories of Tom Ford about 70 years and the club Studio 54.

Of course, one should not assume that romantic image of Russia and the legacy of Diaghilev’s ballet gone. Just a 15-minute walk from the Moscow headquarters Rybchinskogo located at metro Barrikadnaya in the shadow of the Stalinist skyscraper, is shop one of the most interesting Sergeenko — 37-year-old Muscovite, showing off their luxurious (and sometimes to coarseness) bustiers, Gypsy skirts and ball gowns at the Paris events of high fashion. And the style itself Sergeenko red lipstick like nesting dolls, the hair covered with a shawl, and the style of clothes she creates, it is far from Rybchinskogo. Sergeenko is a former wife of a Russian insurance Mogul Danil Khachaturov is not only a designer, but client fashion houses. Her work is based on Russian history and on the modern craving for handmade products. It has hundred artisans who sew, embroider and embellish with beads, using the techniques that are typical for folk costumes in different Eastern European countries, including former Soviet republics, such as Kazakhstan, which was born Sergeenko. The silhouettes of her costumes, I refer to the Russian tradition: multi-layered skirt, corset waist, strange hats, including various headdress — a tall, decorated with pearls ridges that can be seen in the portraits of the Russian empresses. If Rubchinskiy and what we put proletarian, Sergeenko style is a strange mixture of peasant woman and Princess: peasant dress for princely prices. Among her clients are many Russian celebrities.

The Queen offered Sergeenko and such brands as Valentino or Jean Paul Gaultier, constantly seeking inspiration in the past in the Russian style, to serve as a symbol of another line of Russian influence, continued in Vogue since the days of Diaghilev. This high-necked dresses with long sleeves, beaded embroidery and fur rims, vaguely resembling a Russian peasant style, available only to the purses of the oligarchs.

But what does a new Russian aesthetics of the Brand and tracksuits Rybchinskogo? It is possible that the Russian youth also value their heritage, even if it is not hemp nation and not the splendor of Imperial Russia. On the contrary, in her case, we are talking about romance quite recently. “The fact that the West is now called the “Eastern bloc”, is not modernity, this is the nineties, explains what. I think it is something very nostalgic even for those people from the Eastern block that read the reference or the Goshin in my work. It is not the current Russia — it is quite different and not so interesting. Maybe in ten years, I don’t know…”

Kaliningrad — in fact, an exclave once part of Germany — it looks for all the parameters of the present Russia. In his airport hang vivid portraits of Vladimir Putin, is frighteningly reminiscent of the portraits of Stalin. The city itself is devoid of glamour Moscow or St. Petersburg is truly beautiful. Its architecture is faceless and looks a little seedy in spite of the few surviving buildings from the 19th century and a few minutes to remind people that before the Soviet victory in world war II, it was a town called königsberg. From the point of view Rybchinskogo, Kaliningrad is a “little piece of Russia in the middle of Europe.” This image is easily projected on the designer, which is actively sells its clothing in Paris under the auspices of the Comme des Garçons — in the stores of Europe, Asia and the USA.

Rubchinskiy not talking about influence, inspiration or even “Russian style”. For him it is just about “Russia”. This word is Cyrillic — it was first printed under his own label, as do the old fashion houses using the word “Paris” as a sort of credentials. This implies that he perceives his art as a natural and genuine part of his country. As the truth about her. Probably this effect and want to get the designers creating unremarkable at first glance, a garment that is remarkable precisely because it reflects the real Russian reality — recent, current and probably the future.

However, maybe it’s just a matter of language preference.