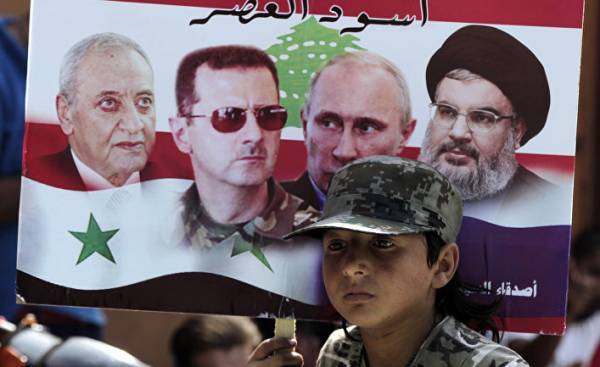 In short, there is no indication that Iran will abandon Syria before the crisis is resolved, and the situation stabiliziruemost. Iran is not ready to leave the territory of Syria, even if Russia is forced to withdraw its troops.

As for Russia, the West has a strong pressure, which is why she is forced to abandon a military operation in Syria.

There is no denying the fact that the accession of Russia to military action in Syria in September 2015, has caused a coup in the Syrian crisis. Over time, formed a coalition to support the Syrian government, which later began to win victories over the face of the “resistance”. The liberation of Aleppo is the culmination of all the victories. American missile attacks on the airport “Sirat” has led to the imbalance of political forces in Syria, but the superiority remains on the party supporting the regime of Bashar al-Assad.

If missile strikes will create an imbalance of political forces in Syria, the U.S. administration will take new steps to strengthen its policy in Syria, which will mean a new challenge party supporting the regime of Bashar al-Assad.

In other words, the administration trump seriously thinking about changing policies, and its policy in Syria. At the same time, she spoke about the continuation and promotion of this policy at any price with all parties, including allies of the regime of Bashar al-Assad. Trump also ready to conflict with the parties that support the regime in order to leave the territory of Syria, and the withdrawal was painful for her.

There is no doubt that many international and regional unions, calling for the resignation of Syrian President Bashar al-Assad, hoping to force Russia to withdraw its troops from Syria to carry out his plan and finish their goals in the region. However, the policy trump will play an important role in the development of this crisis.

I’m not saying that the other party is able to overthrow the regime of Bashar al-Assad to transfer Syria into the hands of armed groups, even if we manage to force out Russia from here. At the same time, I’m not saying that there is evidence that the other “axis” is able to withstand the onslaught and stay the same counter as before, and that she has a trump able to help her to remain the same counter, for example, in the question of Israel’s security. However, the main theme of my reflections: how persistent Russia to stay in Syria?

It should be noted that Russia joined in supporting the regime of Bashar al-Assad not only because of the demands of Iran, Syria or other allies, and because of their own benefits and ambitions. Russian military invasion of Syria is not intended to protect an ally with which it has close historical ties. It is more likely that the actions of the West against Russia have forced Moscow to think about the need to punish Western countries and provide the country security and protection.

The approach of NATO missiles to Russia, the fall of Ukraine into the “Western fold”, consistent sanctions on the country, has forced Moscow to think and feel that the West not only will not retreat from taking provocative measures against it, but eventually cave in and try to break Russia. That’s why Russia’s military intervention in Syria is a kind of message to the West that Moscow is still strong and able to compete with countries that threaten its interests.

Still the sanctions imposed on Russia, while Ukraine remains in “embrace of the West”, but the missile did not leave the borders of the country, it is unlikely that Moscow will reject the achievements of its intervention in Syria. The only thing that can influence the development of events is that the West, especially Washington, will offer a set of solutions, which would imply the best option for all parties, and in particular to the people and government of Syria and settlement of the conflict in this country.

Press Secretary of Britain said that Theresa may and Donald trump said that the visit of U.S. Secretary of state Rex Tillerson in Moscow — “is the opportunity and the right moment in order to make progress in finding solutions, which should lead to a political settlement”.

She also added that “the Prime Minister and the President agreed that at present there is a chance to convince Russia that its Alliance with Bashar al-Assad is no longer in its strategic interests”.

Are you wondering: will Tillerson to ask Lavrov to abandon support for Bashar al-Assad in exchange for the lifting of sanctions, the withdrawal of the missiles and the return of Ukraine in the “arms of Russia”?