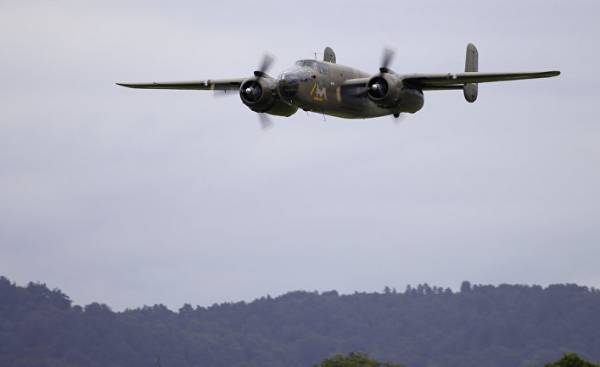 75 years old “Doolittle RAID” also known as the Tokyo RAID, the first air strikes on the territory of Japan in world war II.

April 18, 1942, 16 American bombers, “Mitchell”, climbing on Board the aircraft carrier hornet and flew over thousands of miles and bombed Tokyo, Kobe, Yokohama and Nagoya.

Given the incredible at the time the technical complexity and unprecedented nature of the operation, she was brilliant.

The participants did not think that open a new era in the military, but left so.

The Japanese attack on pearl Harbor became the first in the history case, when carrier-based aircraft made to defeat the enemy. USA took advantage of the experience of the enemy within four months.

5 September 1941, reporting on the preparations for the attack on pearl Harbor, the Japanese chief of the General staff Hajime Sugiyama assured the Emperor that retaliatory air strikes on Japanese territory for the Americans impossible.

Immediately after the accident in Hawaii Franklin Roosevelt ordered the military to think about the options of a sting operation.

Airfields from which to reach the Japanese metropolis, the United States at that time was not.

Then carriers are not meant for bombing the land, and to combat other ships. Based on them, the aircraft had a small radius of action, and to approach close to shore was impossible because of the danger of collision with the enemy fleet.

The inspiration of Commodore Lowe

The idea is to pile up — no other word for it! — army bomber on an aircraft carrier came up to the Commodore Francis Lowe from the headquarters of the U.S. Navy.

From the memoirs of Lou known the exact date: Saturday, 10 January 1942.

Departing from the naval base in Norfolk, the Commodore saw from the air the ground for a bombing and drawn on the ground of the circuit carrier, on which the pilots were training to strike. Then it dawned on him and.

Commander of the Navy Admiral Ernst king approved the plan and directed the technical details to the Commodore to Donald Duncan, who was in the naval staff for aviation operations and he was an experienced pilot.

Duncan closed the office and worked without stopping for five days. The result was a 30-page report to Admiral king, that the Commodore has written from hands — such was the degree of secrecy.

On parole and on one wing

Of the three types of medium bomber with the desired characteristics of range and payload Duncan chose-25B “Mitchell”, which had a smaller run and wingspan.

The Japanese people were told that he is invulnerable. The radical attack on Japanese territory were to cause confusion in the minds of the Japanese and to give rise to doubts about the reliability of their leaders. The second psychological argument was that the Americans were desperate to raise the spirit.

On the deck of the aircraft carrier “eyeballs” could accommodate 16 cars.

The calculations showed that “the Mitchells” will have to facilitate and to take extra fuel, clogging the passage of cans of gasoline. Any stray bullet, immediately turned the car into a torch, the more that act over Japan had no fighter cover.

Even in this case, the fuel for return to the aircraft carrier is not enough. Had to fly to China and land on the airfield near the town of Qujing, in the territory controlled by Chiang Kai-shek.

To participate in the operation chose “hornet” — the newest aircraft carrier, only in January 1942, transferred to the Pacific fleet of the United States. The RAID was supposed to be his first combat mission.

Aircraft carrier with escort ships were rapidly sneaking up on targets at a distance of 400 miles (about 580 km), to produce aircraft and immediately return in order to avoid collision with the superior forces of the Japanese fleet.

Command of the squadron appointed the Lieutenant Colonel James Doolittle — famous as a holder of several aviation records.

On 31 January the head of air force intelligence (the future commander of the strategic air force), Brigadier General Carl Spaatz presented Dolittle a list of goals.

February 2 held a test take off the “Mitchell” from the deck of the aircraft carrier “hornet”.

The aircraft took part from the 17th bomber group, stationed in South Carolina and engaged in the fight against German submarines in the Western Atlantic.

Technical trouble spent on the plant in Minnesota.

The crew of each “Mitchell” consisted of five people. On 9 February, the air force announced the recruitment of volunteers for an “extremely hazardous mission”. By 17 February 80 participants were selected. March 1, they started nailing and training on the basis of the Eglin field in Florida.

The campaign began on 2 April.

At first everything was going like clockwork. But at 07:38 18 April, when the hornet was 650 mils from the island of Honshu, 250 miles from the planned point of departure of the aircraft, it was discovered by two Japanese patrol vessel.

Accompanying the aircraft carrier, the cruiser Nashville sank them, but from water harvested from the Japanese sailors, the Americans learned that they had time to inform the squadron by radio.

Fearing that the enemy will lift aircraft, and sent to intercept the ships, the commander of the squadron of Vice-Admiral William Halsey immediately ordered to prepare for launch.

Plan one “Mitchell” was considered redundant, but at the last moment Doolittle decided to use it. In the rush to Board is not loaded extra cans of fuel, which soon played an important role in the fate of the crew of captain Edward York.

The sixteenth plane took off from the deck at 9:20, at a distance of 600 miles from Japan.

Ten bombers attacked targets in Tokyo, three in Yokohama, the other in Nage, Kobe and Osaka.

We expected to inflict both material and psychological damage. In addition to the destruction of specific objects and production decrease, the goal was to sow in Japan fear and uncertainty, possible, to achieve the transfer of forces from other theaters to reinforce the defence of the metropolis, to instill courage in the American people and to make a favorable impression on our allies

At the suggestion of Commodore Duncan decided to bomb from very low altitude to increase accuracy and to confuse the Japanese air defense. The aircraft was fitted with special sights.

The first hit the center of Tokyo Doolittle at 12:15. His Bombardier Sergeant Fred Bremer dropped all four bombs on the gun factory from the list of General Spaatz. There was a big fire, which served as the benchmark for the following crews.

At 12:35, the Japanese declared an air alert. But despite anti-aircraft fire and attacks by fighters, one was shot down or seriously damaged.

Only one “Mitchell”, being attacked by nine fighters, dropped bombs anywhere.

According to Japanese data, on the ground, killing 50 and wounding 400 people.

The main mishap was waiting for pilots, when it seemed that all behind.

Because of premature take-off from the “Hornet” they did not have enough fuel to the airfield.

Four cars made a hard landing on the water or rice field and crashed. Three people were killed and seven were injured.

The crews of 11 cars jumped out with parachutes.

The Japanese deployed in area of 50 thousand square kilometers for a military operation on their capture and destruction of potential landing sites. However, according to Chinese historians, killed 10 of thousands of peasants.

Three Dean hallmark, bill Farrow, and Harold Recession — in violation of the Geneva and Hague conventions and customs of war were murdered on 15 October 1942. By not fully confirmed data, they were beheaded with samurai swords.

Robert Muller died in the camp on 1 December 1943.

In the land of the Bolsheviks

The crew of the captain of the York, same that when you take off have got the least fuel, and not try to make it to China, and headed to the airfield “seaside” near Vladivostok.

Moscow and Washington were allies in the war with Germany but with Japan, the Soviet Union was the world.

In accordance with international law, airmen interned in the USSR until the end of the American-Japanese war.

Place of residence they have identified Ashgabat. After 8 months, when the noise subsided, they allegedly fled across the border to Iran, and in fact was given to the representatives of the British army. The plane did not return.

A single RAID could not have a significant impact on the ability of Japan to wage war, but its moral value was great. In this sense it can be compared with the Soviet air RAID on Berlin on the night of 7 to 8 August 1941.

The Japanese were convinced of the vulnerability of its territory and the unreliability of the optimistic assurances of the authorities.

The Americans won their first military success and, at least partially, paid off for pearl Harbor.

The Japanese attack and American revenge marked the beginning of a new era in war at sea. Replace large artillery ships as the main striking force of aircraft carriers came.

All 16 aircraft were lost irretrievably. But casualties seven people from 80, including four died in captivity — can be considered very small for such a complex and dangerous operation, in the absence of experience.

Colonel Doolittle was promoted one rank from Brigadier General.

56 RAID members later fought in the Pacific, in North Africa and in Europe. Ten of them died.

After the war veterans ordered 80 silver goblets engraved with names of the living and the dead members of the RAID.

At the annual meeting on April 18 cups of the dead and turned upside down.

The last meeting, which was attended by three took place in 2013.

Alive today one participant of the legendary operation — 101-year-old retired Lieutenant Colonel Richard Cole, the former second pilot in the crew of Doolittle. At 96 he was still raised in the air sport aircraft.