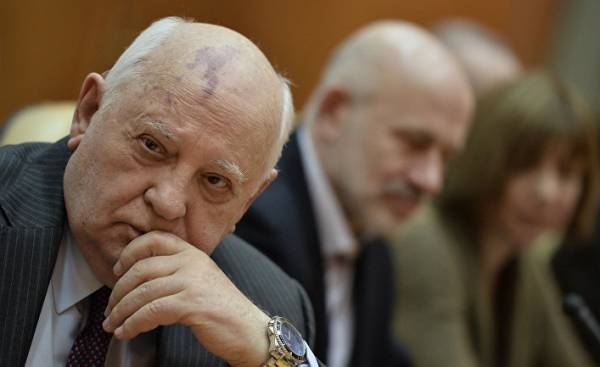 Mikhail Gorbachev, the last President of the USSR. The only man who would fall of the Berlin wall — at least peacefully. The man who in the eyes of many Russians responsible for the collapse of the Soviet Union. For many Germans he is a hero to many at home — a tragic figure. In March he was 86 years old, and shortly before it met our correspondents. Illness and age have left their prints on his face.

His passion for the big questions of history, however, will not go away. Recently saw the publication of his new book “the family: a Proclamation to the world” (Appell an die Welt). “How is Helmut Kohl?”, he wanted to know first thing. It turned out a conversation about German and Russian, on war and peace.

The conversation during the time when U.S. Secretary of state Rex Tillerson (Rex Tillerson) calling relations with Moscow “reached the bottom”.

Bild: Mr. Gorbachev, you 30 years ago began the policy of glasnost and Perestroika, which eventually led to the end of the conflict between East and West. Today, Russian tanks are in the East of Ukraine and Crimea was annexed by Moscow. You know that Europe is once again experiencing fear of Russia?

Mikhail Gorbachev: Regardless of who that is, Russia should be taken seriously — as people worthy of respect. Nobody cares about Ukraine more than we Russians. My mother was Ukrainian. And the second woman in my life, I also lost wife Raisa — was also Ukrainian. In this situation it is impossible to mix everything together and engage in propaganda. Obviously, there are forces interested to provoke animosity between Russians and Ukrainians and tensions between the two countries.

Let’s look back on times of peace: when in 1994 the last Russian soldier left Germany…

— …someone even talked about the “end of history”. Since then, what has gone wrong in the attitude of Russia to the West?

— The relationship between Russians and Germans have always been great! Them cannot be overstated: two of the people involved with fascism in a terrible, bloody war, staring at each other as enemies. Germany occupied almost half of the European territory of the Soviet Union. I myself experienced this as a child, and experienced, as they say, in their own skin, what life in the German occupation. However, we were able to restore mutual trust and to make peace. Stalin once said, “Hitlers come and go, but the German people remains”. All Russian.

We — Russians and Germans together have a unique combination of qualities and powers: us, Russian, lacks much of what emits from the total number of the Germans, and the Germans may lack something that we have. Thus, we uniquely complement each other. We can’t allow that created two of our people were destroyed.

— However, you blame the West that he did not keep his promises. You are personally disappointed in your friends, for example, Helmut Kohl or George Bush, speaking about their actions against Russia?

— I think they could do a lot more than it did. Much of what happened later is directly related to the collapse of the Soviet Union. In his breakup we have no one to blame, but in the West many then rubbed his hands and felt like winners. Even those who promised us that “not an inch will move to the East.”

— Russia feels deceived by the West?

— I would say that the West, especially the United States, away from home arrangements. Remember: in the second half of 1980-ies of the USSR and the United States has taken unprecedented steps together! They started to reduce nuclear weapons. Just think: 80% of the nuclear potential accumulated during the years of the cold war, was then destroyed! While both sides acknowledged that this in no way affected anybody’s safety.

But then the West took advantage of Russia’s weakness after the collapse of the Soviet Union and declared himself the “winner” in the cold war. The principle of equality in international relations was forgotten, and in the end we all got to where it was.

Now the US and Russia is openly talking about the modernization of its nuclear weapons — it was not for several decades. We are facing a new arms race?

— It was not only threatened — something which she is already in full swing. In Europe, moving troops, including heavy military equipment: tanks and Armored personnel carriers. But more recently, NATO forces and Russia were really far from each other. And now they face literally nose to nose.

— Don’t you fear for your main achievement — the fall of the “Iron curtain”? We’ll have to tune in to a new cold war?

— The language of politicians and high-ranking military becomes more belligerent, and military doctrines are formulated more strictly. All this is picked up by the media, which tend to heat the atmosphere even more. Relations between the powers deteriorated more and more. The impression that the world is configured for the war. Thus, all signs of the cold war.

— If we continue to just watch and sit idly by, then anything is possible.

— Let’s talk about Russia. Russia still perceives itself as a European country? We still have common values?

But perhaps Russia can still be called a democratic country?

— Russia is on the path to democracy. Halfway. In the world there are about 30 developing countries in transition, and we are one of them. Because we are not all constantly provoke us, claiming that we are not a democratic country.

— Do you personally trust Vladimir Putin?

— I often criticized certain actions of our leadership. But I do trust him.

— How long Putin will be able to conduct its confrontational policy towards Europe and the West if the economic situation in Russia continues to deteriorate?

— No empty illusions! We are a people ready for any sacrifice, and I know of no other such people who would be ready for such heavy casualties. Only one war killed nearly 30 million people.

And today? What do we expect? What can we expect from many friends who were closely associated with Russia? Many of them now insist on further tightening of sanctions. To punish Russia?! I think that we — Russians and Germans — should re-establish contacts and to strengthen and develop our relations and to restore mutual trust!

Note: we are in favor of friendship with the Germans — forever. And our people want it.

I speak on behalf of the Russian public. I represent public opinion.

— I share his opinion. At the time we dissolved the Warsaw Pact. Then in London held a meeting of the NATO Council, which came to the conclusion that we need a political Alliance but not military. I hope that NATO again taken aback by this question.

— What do you expect from the presidency Frank-Walter Steinmeier…

— …which is considered a figure of the relating to Russia’s understanding?

— We don’t need some special understanding. The usual understanding would be enough. Maybe someone is benefiting from the fact that Russian vilify. I’m sorry that the German manual — I specifically say “guide” because I can’t imagine that the whole German nation supported this position allowed such a deterioration of relations between our countries. Because I am firmly convinced that the Germans, German citizens do not want to feud with the Russians.

Under “German leadership” you mean Chancellor Angela Merkel, who more than any other insists on anti-Russian sanctions?

— I like her, I appreciate her achievements and treat her with sympathy. Maybe that’s why my grades are so emotional.

— Mikhail Sergeyevich, how do you will remain in the memory of your fellow citizens, embodying freedom, glasnost and Perestroika? Or a person who has a great country?

— You know, history will put everything in its place. I firmly believe that my work and my efforts were not wasted. I will continue to deal with the case, which was resolved.