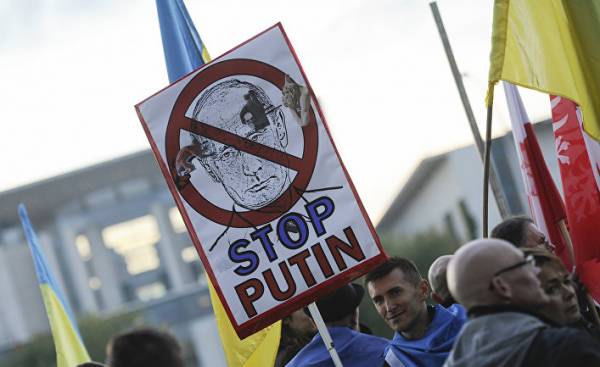 In early April, one of the parliamentary factions, initiated the introduction of a visa regime with Russia. However, such proposals have been voiced before, and the Ukrainian foreign Ministry cited a well-founded counterarguments.

In fact, such initiative is the introduction of the visa regime, the rupture of diplomatic relations, the denunciation of the agreement of the termination of trade contacts, lack of participation in the CIS and others sounded, and will sound because it’s the fourth year of the war and any signs of settlement are observed. But this is just a “point” proposals that, in the apparent lack of strategy, do not answer the main question: how to build relations with the country-aggressor? Moreover, to build for years, because of positive change in the Kremlin’s policy in the Ukrainian direction is not expected.

Not so difficult to predict the main negative trends in Ukrainian-Russian relations in the near future, “delayed symptoms” of the Crimea, smoldering conflict in the Donbass, the conservation of “frozen” political and diplomatic relations, a further reduction in turnover, the restriction of contacts in all areas of the energy confrontation, information confrontation, the deployment of war in cyberspace, the transfer of the conflict to international courts. In other words, the relationship between Kiev and Moscow “the bottom” is not reached.

In General, the annexation of Crimea and the Russian expansion into the Donbas from the whole range of interstate relations (not to mention the war itself) leave Ukraine for a long period, only the format of confrontational coexistence with RF — restricted, forced, cold — depending on the current situation. Anyway, Kiev on the Russian direction have to follow the old well-known principle: “do not believe, do not fear, do not ask.”

It should be noted that to the sacred date-18 March 2018 (presidential elections, Vladimir Putin) it is possible a new “territorial acquisition” of Russia — the Union of North and South Ossetia within the Russian Federation, the recognition of “DNR” and “LNR” and conclude with them treaties of friendship and mutual assistance. However, we cannot exclude more stringent “Crimean option” (signal will be held in the “Republic” referendum on joining Russia). Therefore, the Ukrainian authorities should pay attention to such threats and (outside of the mantras of “no alternative to the Minsk agreements”) to define themselves relative to ORDO. Not to mention, to finally adopt overripe the law about temporarily occupied territory of Ukraine.

During the war it was decided a lot of legal documents connected with the Russian aggression. For example, the number of acts of Parliament — Declaration “About the struggle for the liberation of Ukraine (20 March 2014), “address to the United Nations…” (27 Jan 2015), a statement “About the resistance to Russian military aggression…” (21 APR 2015), etc. also came into force a new Strategy of national security of Ukraine, Military doctrine of Ukraine, the Concept of development of the security sector, cybersecurity Strategy, the information security Doctrine, etc.

Codification, or, more simply, the ordering of normative array and, on its basis, the development of a medium-term Concept of relations with Russia is essential. In such a concept should define the status and Outlook of bilateral relations, the purposes, tasks and prospects of the Ukrainian policy towards Russia in the medium term, the norms and rules of relations with the aggressor state in all spheres — political-diplomatic, financial-economic, energy, scientific-technical, humanitarian, etc., and terms for a possible settlement of the Russian-Ukrainian conflict as a whole. The project is similar to the concept of the Razumkov Centre published in 2015, and obviously, development of such a document is the prerogative of the NSDC of Ukraine.

But first, we need a new Law on the principles of foreign policy of Ukraine — the current document is outdated and does not meet modern realities. About it already spoke in Parliament. However, it was in December of last year… it’s Time to pick it up again.