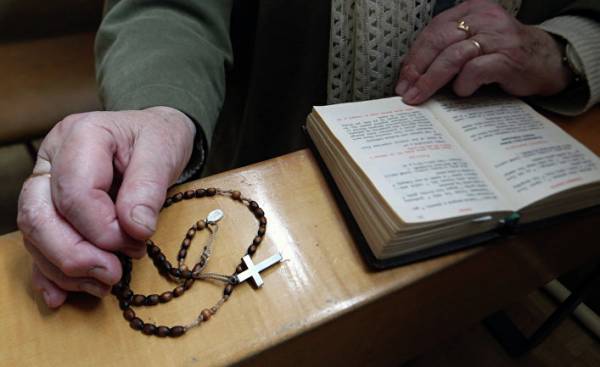 In Iztapalapa, one of the districts of the capital of Mexico, on Good Friday is, perhaps, the biggest procession in the world. The number of participants reaches one million people. Many pilgrims carry their own crosses. Some go barefoot, someone is tying itself prickly plants to experience pain, or bleeding animals. In turn, in the Brazilian Brejo da Madre Deus in a specially constructed for this purpose town, depicting ancient Jerusalem, arrange one of the world’s largest dramatizations of the passion of Christ, which involves hundreds of actors. In the Philippines, dozens of men will once again be allowed to nail themselves to wooden crosses in memory of the Savior’s death. Mexican Tarahumara Indians are satisfied with the staging of the battle of the “white” (“sons of the devil” with a doll representing Judas) and “red” (“sons of God”). In Seville, the pilgrims will hold a large procession and carry on huge platforms figures of saints.

There are many Easter customs. The celebration of this important holiday for Christians on every continent has its own form and spiritual content, appeals to tradition, known only to a particular local community. However, to meet with the exoticism of regional Easter traditions, not necessarily to go to distant South America or the Philippines. In Poland, too many interesting.

Těšín Silesia, distant area in the South of Poland. A few hours ago a devout woman returned from service. Today is palm Sunday. In the Church she brought the “palm” of their own making from the branches of hazel, birch and, of course, full-blown willow. The woman remembers how her mom tucked consecrated “palm” into the slot in the attic home. It was believed that it protects against lightning. Now it’s already almost do not believe some elderly people rather decorate the “tree” home altar.

A few left and those who go to Church for the old “palm trees”, burnt on two sides by fire. And more recently, the peasants made them small crosses, so that after the Easter service to place them in the corners of their fields, hoping for a good harvest.

Since we’re talking about land, it is worth mentioning that in Cieszyn Silesia was a time when the Tuesday during Holy week could be seen wandering alone through the fields of people. Superstitious Silesians believed that was found on this day, the coin — a sign of impending trouble, so they avoided any contact with the money, refused to shopping and appointments in the city.

The city did not go as well in the so-called Black Friday. This time it wasn’t about superstitions related to money, and bathing in the lap of nature. People believed that whoever bathes in this river, the next year won’t hurt. Some keep this custom up until now, although in Cieszyn Silesia is becoming less residents, who remember the old customs. If you ask the young silesky recipe “Easter Negro”, few will be able to tell it from memory. But this is a traditional bread product with pieces of ham and brisket is a delicacy, what else to look.

“The Turks are coming!”

In the Church of the order of Bernardines in leżajsk parishioners crowded composition depicting the Holy sepulchre. In the distance is the figure of the dead Man who lies in a white robe on a huge stone. His face, bloodied from the inhuman torture, candles light. Crowd wants to get closer, but it won’t make it: the coffin are two young men. It is the students of military schools, which have a guard. They are dressed in a uniform. Stripes — the Polish flag in his hands — copies of assault rifles M4.

Here, in the Subcarpathian region, this guard — not new. Say the so-called Turks (honorary guards that will carry the service in the Church from good Friday to Easter service) will appear in about 30 villages of this corner of Poland. Often sentries are different from ordinary soldiers. Their costumes stands out for the high hat, the shako, usually decorated with paper flowers. Where in Carpathian tradition came from the honor guard at the tomb of the Lord, and the name “Turks”?

The legend tells of the peasants who in the autumn of 1683 he returned from a trip to Vienna and were dressed in Turkish uniforms. Their appearance caused in the villages fear and panic. People were shouting: “the Turks are coming, hide”!” Unsuspecting brave soldiers went immediately to their churches to thank for the victory and saved lives, and stood in the honor guard at the tomb of the Lord. This tradition is still supported.

After the Easter service men returned home, the guard at the tomb is no longer needed, because it is empty. Valiant sentries can proceed to the feast at richly laid tables. In this respect, a joyful meeting of Easter in the Carpathian region looks the same as in other regions. But few places have special cheese from Kresowa. This is a rare treat: a one hour get to try it once a year, when on Easter Sunday the hostess served with white soup (soup with flour, often whole wheat, sourdough, approx. transl.) this delicious dried white cheese from cow’s milk.

At the cemetery with Nepomucki

Since we are talking about “Turks” and the legend connecting their appearance with the Vienna battle, it is worth to mention another Easter custom of the distant Carpathian region. Few people know that in the village Walpole-Skrinska at Easter, in the night from Saturday to Sunday on the main streets walks the drummer, and wakes the residents. Drum, carrying the good news of the Resurrection, says the tradition, was a gift which was presented to the king Jan III Sobieski, returning from Vienna.

On the way from Walpole in the nearby village Asenovo are two cemeteries. One of them in the XIX century, buried the victims of the cholera epidemic. At Easter, when the drum pauses, the villagers come here with a solemn procession. They bear a figure of St. John Nepomuk John of, singing songs addressed to the protector against contagious diseases, St. Rosalia, and offer a Litany to all the saints, to honor the memory of the dead.

Zurek (soup with sourdough from rye flour, approx. transl.) in the tureen, pate, eggs, sausage and yeast grandmother — a set of dishes, served at the Easter Breakfast in the Subcarpathian village Lutoryz, most likely, will not cause anybody surprise. But the fact that this is all you can eat under the open sky, already Yes… If the residents of Warsaw or Krakow after Easter service one day, rushing home to cook birthday Breakfast, here are some of the family in good weather, arrange dining room in the field. This tradition comes from the days when people anxiously waited for hungry springtime. People believed that the Easter Breakfast surrounded by nature and produce a crop, abundance of food in the future.

In the Subcarpathian region there are many other customs. For example, in leżajsk, the priest greets the faithful in the Church, and he toured the area. People gather at a roadside chapels and waiting for him to come to bless their Easter baskets. In Ulanova have a great tradition to proclaim the good news with a shot from a huge wooden cannon.

In other parts of the country have their own traditions. We have so many own Easter traditions that they could bestow all the earthly continents. Eggs-eggs, Watering Monday, Polish cuisine… Because where else fantasy and imagination has created such wonders as, for example, kasanka from Rakov, soup on serum from Handlowcy or delicious muffins with almonds and nuts?