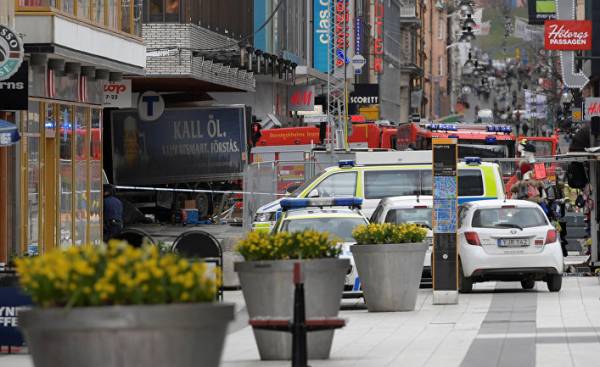 Terrorist Taymūr Abdulwahab blew himself up on Bryggaregatan in Central Stockholm on 11 December 2010. By sheer luck no one was killed except him. What was the reaction of Swedish politicians? Hardly did they react at all. After almost seven years. Akilov admitted that he ran over four people and caused injuries to passers-15 on Drottninggatan, close to where the exploded Abdulwahab.

In Sweden the law does not consist in the terrorist organizations such as “Islamic state” (banned in Russia — approx. TRANS.). Yes, it’s true. You can go to Syria and join ISIS, and if there is no evidence that people took part in the fighting, he will return to the country they went to normal vacation to the South. Even if there is no doubt his connection with ISIS. That is why those who openly intends to fight on the side of terrorist organizations here making excuses, as those who have done this, for example, in Syria, in case if their actions cannot be proved with the same accuracy, which investigates crimes in Sweden. To condemn terrorists, the Swedish police actually need to collect information on the locations of their crimes in Syria and Iraq. For a guilty verdict requires a separate proof of each particular act, each murder or rape. In practice, this means that condemn ISIL militants harder than those who commit similar crimes in Sweden, not in the war zone in the middle East.

The main reason for the inability to convict terrorists is enshrined in the Swedish Constitution, the freedom of Assembly. Very good freedom, only it is perhaps more suitable for unions, male choirs and sewing circles than for the “Islamic state” and “al-Qaeda” (the terrorist organization banned in Russia — approx. TRANS.). Why the present and past governments accord freedom of Assembly to the terrorist organization? Almost seven years ago, we exploded the first suicide bomber, but fifteen years ago, al-Qaida declared war on the entire Western world, attacking the world trade center. And the UN and the Council of Europe has repeatedly criticized us for our passivity in the fight against terrorism. But the government continues to dilly-dally.

Of all the European countries only in Belgium, more jihadists per capita than in Sweden. In Norway, less than one third of the Swedish number, but she managed to condemn many of them. However, their security agencies is not as extensive. Why Norway is better? All thanks to the new legislation, which came into force in 2013: it has criminalized the terrorist organizations. A number of Norwegian jihadists were brought to trial in a short period of time.

The results I asked Lars Akerhaugen (Lars Akerhaug), one of the leading Norwegian experts on terrorism. “There is no doubt that on the background of police investigations Islamist circles were under intense pressure. The remaining Islamists were forced to go underground, and many sources claim that the Islamic community has more or less disappeared. This clearly shows that the tightening of laws gives a noticeable effect. It is tragic that many managed to leave before the police got legal grounds to stop them. The fact that in Sweden today, terrorists roam free is simply crazy, as you Swedes call it”.

When Dagens Nyheter, April 5, interview a Norwegian expert Benedict Bernland (Benedicte Bjørnland), she expressed surprise, why do we allow freedom of Assembly to become an obstacle to the prosecution of terrorists. “A terrorist organization, whose goal is the destruction of democracy and committing extreme violence… I see nothing remarkable. Why protect her?”

When it became obvious that Norwegian law is valid, I wrote in 2015 article that Sweden should take an example from Norway. Many, including the bar Association, joined me in a heated debate. Liked that the interior Minister Anders Ygeman (Anders Ygeman) and Minister for social insurance Strandhill Annika (Annika Strandhäll), which have expanded our discussion on Twitter. Earlier, the government said that the ban on participation in organizations contrary to the Constitution. And now it suddenly changed his mind and together with the entire opposition with the exception of the Left party wants to initiate a prompt investigation, in order to criminalize the terrorist organizations. In other words, to do what we called in the article.

It is possible that the process would have long gone if influential structures such as the bar Association, not branded anyone who wanted to follow the example of Norway.