Russia confirmed its interest in removing problems in relations with the United States. This was stated by Minister of foreign Affairs of the Russian Federation Sergey Lavrov after talks with U.S. Secretary of state Rex Tillerson, – reports TASS.

“There are many problems, including those that are left as the bombs from the administration of Barack Obama, Lavrov said. – To overcome barriers takes effort. Today the President of Russia Vladimir Putin confirmed that we are focused on this”.

Russia and the United States hope that disarmament talks will resume and be pragmatic.

“We noted the special responsibility of Russia and the United States for the situation in the sphere of military-political security and regional and global perspective, he said. – Checked the clock on progress in the implementation of those agreements on strategic stability, arms reduction, which operate between the two countries, have agreed to overcome some pause that these processes happened for objective reasons in connection with the change of command in the White house. We expect that contact to review progress in our cooperation in the sphere of strategic stability and arms control will be resumed and will be held in a business-like, pragmatic with a focus on clear implementation of what we agreed.”

Russia felt the United States ‘ readiness to continue contacts with Moscow on implementing Minsk agreements. According to Lavrov, the meeting addressed the crisis in Ukraine. “We have a common position that the Minsk agreement 2015 must be fulfilled”, – he said.

“We remembered how the previous U.S. administration established a two-way channel of consultations between Moscow and Washington in addition to the Quartet, working in the framework of the Normandy format (Russia, Ukraine, Germany and France – approx. TASS). Feel the interest of the current administration to continue bilateral contacts on the subject to help to find practical ways to implement fully the Minsk agreements”, – said the Minister.

“Such efforts will be welcomed, we are ready for them”, – assured the head of the foreign Ministry.

Russia is interested in close cooperation with USA in combating crimes in cyberspace. “We are interested in close cooperation on the fight against crimes in cyberspace, – said Lavrov. – We have this interest is not only preserved, but also fully valid, and we have offered to resume contacts as the special representatives of the US administration and the Russian President and the relevant agencies. We felt that this time, maybe the result of these efforts will lead to the establishment of a channel”.

Lavrov recalled that in October 2015 Russia has offered the Obama administration to cooperate in the fight against cybercrime. “We proposed to establish cooperation, to hold a special contacts between the competent authorities, to establish a bilateral mechanism, which in real time would be exchanged information about where, who and how is trying to disrupt existing international and national legal norms of Russia and the USA. The Obama administration has refused this offer, and simply did not react”, – he said.

As noted by Lavrov, Putin confirmed his readiness to renew the Memorandum on the prevention of incidents in the skies over Syria.

“The Memorandum on the prevention of incidents and ensuring the safety of flights in the operation in Syria was suspended by the Russian side, – said the Minister. – Today the Russian President reiterated our readiness to resume its use on the understanding that it will be clearly confirmed the original goal of action air force American coalition and videoconferencing in the fight against ISIS (the terrorist group “Islamic state”) and “al-Nusra Dzhebhat” (banned in Russia).

The Memorandum was developed in October 2015. It contains a set of rules and restrictions, intended to prevent the occurrence of incidents between aircraft of Russia and the United States. Within its framework between the two countries were established channels – operational communication, defined a mechanism of interaction, including mutual assistance in the event of emergency situations.

Earlier it was reported that the Pentagon on the orders of the President of the United States Donald trump has launched 59 Tomahawk cruise missiles at the military airport in the Syrian province of HOMS. A rocket attack was a response to the intended application of April 4 chemical weapons in the Syrian province of Idlib. The US government believes that this airfield was started by the alleged chemical attack. According to the defense Ministry of the Russian Federation, the Syrian aircraft that day bombed the shop, where militants made ammunition with toxic substances that existed in Iraq and were used in Aleppo. 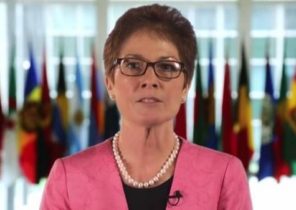