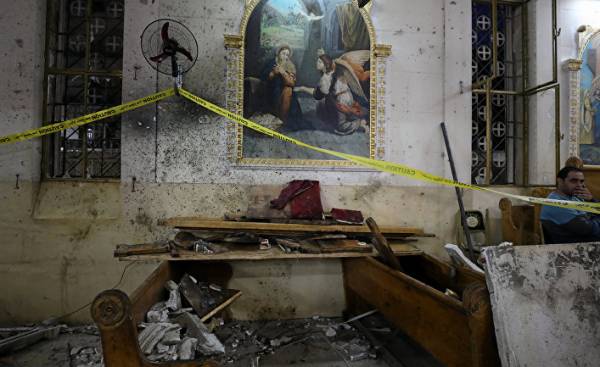 90% of all Eastern Christians — the Egyptians, like the mark Fromage, Director of the organization “aid to the Church in need” that supports Christians around the world. Egypt is a bridge between the Middle East and Africa, which could allow to create a much-desired Islamist Caliphate.

The incident Sunday in the terrible terrorist attacks in two Egyptian temples were not the first and unlikely the last. 44 dead and hundreds more injured in Tanta and Alexandria joined the long list of martyrs of this country and of the Church (it is, incidentally, calls itself the Church of the martyrs).

President Fattah al-Sisi immediately imposed a state of emergency for three months. This is a strong signal in the direction of the Christian community, and whether it is a fair assessment of the situation in Egypt is really in a war! He declared it a “Muslim brotherhood”, “Islamic state” and other Islamist groups (banned in Russia — approx. ed.).

They set themselves many tasks, but the main is to take in hands the power to recreate the Caliphate. In addition to military and terrorist operations to control the territory of their strategy involves homogenization of the population: it should not just be Muslim, and to support these groups promoted radical Islam. This implies treatment or deportation of religious minorities, including, of course, Christians.

The terror of ISIS and associated Islamist groups includes the elimination of the Christian presence in the middle East. In Iraq and Syria, their plans are already far advanced. Now comes the turn of Egypt where the attacks are apparently just beginning. But why Egypt, and why now?

The increasing pressure on ISIS in Syria and Iraq has emboldened it to intensify activities in Egypt. The idea was always to form a bridge between the Middle East and Africa, through Libya (destruction of the country by our hands played into their hands), or across the Sahara-Sahel. Egypt so far is for an obstacle.

In addition, the country represents a huge reservoir of Eastern Christians. The majority of Egyptian Christians — the Copts: we are talking about 14 million believers, or 15% of the population, even about specific numbers, there are different opinions. The government recently claimed that Christians make up 2-3% of the population. It thereby sought to downplay their presence and thus representativeness. Often, the basis of a figure of 10% (average between 3% and 15%), but then the question arises, why should we make government a farce and not according to the parish lists.

Throughout the rest of the middle East barely has 2 million Christians. Thus, 90% of Eastern Christians — Egyptians. This explains the fact that they are increasingly becoming a priority target of the Islamic state. Their strategy involves the elimination of bullying attacks, which carries a clear message: call to Islam or pack your bags. In addition, it can draw them into the escalation of violence, which in any case they will be the losers.

Despite the official support of President Fattah al-Sisi and the security of most churches, Christians is growing irritation apparent ineffectiveness of the measures taken. If the angry Christians will eventually raise a rebellion against the Egyptian authorities, the IG will kill two birds with one stone: weaken the Egyptian government, whose power wants to take, and will accelerate the disappearance of the Christians, whose reaction will cause a rise of aggression against them.

Thus, as you can guess, these attacks will not be last, and the pressure on Christians in Egypt will only increase despite the fact that the situation is so tense. Here is another figure: only 1.5% of the Egyptian civil servants — Christians. Given that the public sector accounts for most of the jobs, that means you have ten times less likely to get a job if you are a Christian.

Anyway, Egypt is mentioned over 700 times in the Bible, the site of the first Easter and served as a refuge for the Holy family. Therefore, the country is a special blessing. The Church of the martyrs can rely on a long tradition of faith, not to fall into the trap of aggression and even more to demonstrate the love of Christ.