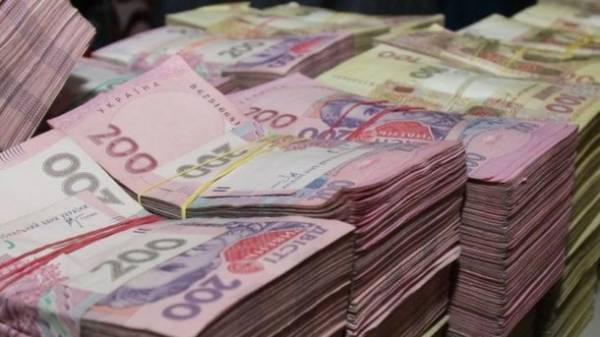 Money supply in Ukraine in March 2017 increased by 1.3% – up to 1 trillion 74.1 billion UAH, the relevant preliminary data, “Monetary statistics” the national Bank of Ukraine (NBU) announced on its website on Tuesday.

According to the NBU, the corresponding dynamics was mainly due to the increase in balances on deposits in national currency by 3.4% to 429,71 billion.

At the same time the volume of cash in circulation outside banks declined in March by 0.2% to 290,92 billion.

The national Bank pointed out that since the beginning of the year the money supply in the country has decreased by 2.6%, while the volume of cash in circulation fell by 7.5%.

The regulator clarified that the balances of deposits of the corporate sector in the month of March increased by 3.7% to 357,03 billion UAH, including in the national currency – by 4.7%, to 228,03 billion UAH with the growth rate according to the latest from 8.8% to 9.3%. The balances of deposits business in foreign currency (in dollar equivalent) in the last month also increased by 2.4% to us $4,78 billion, while interest rate decreased from 3.6% to 3.2%.

As a result, the amount of funds on Deposit accounts of business almost returned to the level of the beginning of the year.

With regard to the balance of deposits of households in March they grew more slowly. The portfolio of hryvnia deposits of the population increased by 1.9% to 201,67 billion with a slight decrease in the rate from 13.8% to 13.7%, while in foreign currency it decreased by 0.7% to $8,28 bn when falling rates from 4.3% to 3.8%. As a result, total volume of deposits over the past month increased by 0.4% to 425,05 billion UAH, which is 1.1% less than at the beginning of the year.

“The growth of deposits in national currency, including caused by preservation of attractive Deposit products of banks in further strengthening of the hryvnia” – said the national Bank.

In his opinion, the increase in hryvnia loans to corporate sector in March by 0.4% to 427,71 billion with a slight increase in rate from 14.5% to 14.9% may reflect a seasonal increase of the needs of enterprises for working capital.

Also increased the demand for credit and households, including on a background of moderate reduction of their cost – to 29.2% from 30.5% the previous month. As a result, balances on these loans in March rose 2.3% to 158,07 billion.

Since the beginning of the year as a whole the credit portfolio of the corporate sector fell by 3.6%, including in the national currency – by 0.3%, whereas credit indebtedness of households in total has decreased by 1.2% with rise of its hryvnia parts of 4.9%.