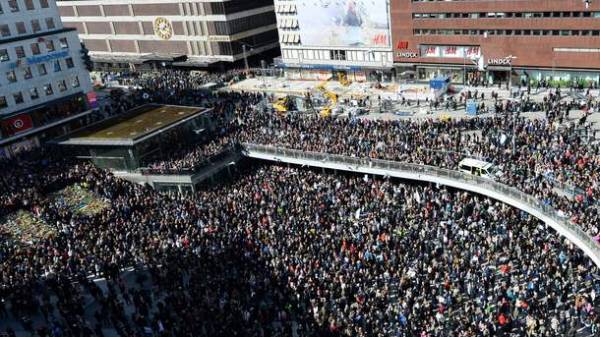 In the centre of Stockholm (Sweden) April 9, 2017, thousands of people gathered at Lovefest (“feast of love”) against terrorism and a sign honoring the memory of those killed in the attack on Friday. In the campaign, according to preliminary data, took part more than 20 thousand people, reports the BBC, reports “RBC-Ukraine”.

Stated that the Stockholm dwellers laid flowers near the Department store Ahlens in the centre of the city where the attack occurred. The participants also kept balls in the shape of hearts and pictures with hearts.

“Terror can never win… in our minds must be the kindness and openness that characterize our city,” – said in his address, the mayor of Stockholm. 1 / 5 Earlier it became known that the man suspected in the attack in Stockholm, was threatened with deportation. As stated by the Swedish police, he had extremist views, in particular, he was a supporter of the so-called “Islamic state”.

We will remind, earlier it was reported that the attack in Stockholm on 7 April 2017, in which four people were killed and 15 were injured, probably made the native of Uzbekistan named Rahmat Akilov.