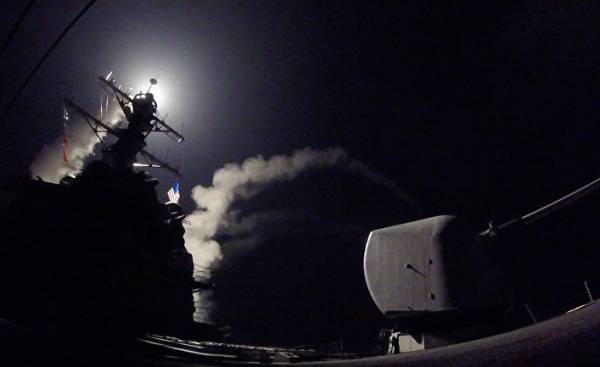 Just one missile strike on the airfield of the Syrian army, the President, Donald trump has managed to demonstrate the weakness of the other parties, but he, most likely, provoked a delay in achieving its stated objectives, which is to defeat Islamic state (a terrorist organization banned in Russia — approx. ed.).

A missile attack on a military airfield “Shirt” needs to completely refute the hypothesis that the Kremlin was somehow trump controls or has in its possession incriminating evidence on the us President. The person on the hook is the blackmailer, would never go to such a step. In addition, the behavior of Russia after the missile strike, the U.S. also cannot be considered a confirmation of the widely discussed version is now that it was just a PR-move, approved by the Kremlin, which had previously been evacuated from the airport its military (and warned Assad). According to this theory, a secret agreement between trump and the Kremlin, and also became the result of a missile attack will reduce the intensity of the investigation of alleged ties between team trump and Russia, and to remove some of the obstacles to a future Grand bargain between the countries.

At first glance, Russia seemed ready to consider this attack as an isolated incident, especially given the measures that the US adopted to ensure the safety of Russians. This incident is much easier to forgive than the incident with Turkey shot down a Russian bomber. Propaganda sources insist that Russia has not tried to defend the Shirt, because the Russian military was not threatened. In addition, the military capacity of the Assad regime, too, has suffered not too much.

However, aside from the predictable anti-American rhetoric and denial of the fact that the Assad regime has used chemical weapons, the statement on Friday, April 7, was organized by the Ministry of foreign Affairs of Russia, contains one very important point. It says that Russia suspends the Memorandum on the prevention of incidents and ensuring the safety of aviation operations in Syria concluded with the United States in 2015. The Memorandum contained the protocols for pilots, requirements to use certain frequencies for communication at points of convergence and lines of communication on earth. This is the end of not only the actions of a particular document, whose scope was broadened since the arrival of trump power, but also a period of enhanced cooperation, which the American and Russian military had established in Syria the last few months. In other words, Moscow made a barely veiled warning to the United States: starting now, your planes become potential targets for attacks.

American pilots had nothing to fear from the Syrian and Russian air defense systems because it was believed that all of the US mission directed against forces of Islamic state and not against the Syrian government. The Assad regime would not dare to attack American planes even now, but Russia has deployed s-300 and s-400 to protect its military facilities in Syria. If Russia is really ready to cease cooperation with the United States on the issue of safety of the flight, the probability of a major collision increases seriously.

Can Putin afford an open conflict with the US is another question. Although now Russia’s military might is not enough to wage war with the US, and Putin is not so cruel and insane to produce nuclear missiles, the Kremlin may find that it has no other option, allowing him to save face, but to answer. Opponents of Putin are already violently happy the fact that the Russian missile defense system failed to prevent an American strike on Sirat. “This is a complete discrediting of all of Putin’s adventures, said the resolute Putin critic Andrei Piontkovsky in an interview with Ukrainian edition of Poltava. — Where’s the famous s-300, s-400 is put for protection, which according to the Ministry of foreign Affairs was set to protect the Syrian airfields to American cruise missiles?”

On Friday, the news of the strike, the ruble has declined, reflecting the perception of Russia’s weakness.

By themselves, the air defense system that Russia has deployed in Syria, can not reflect the full-scale and prolonged missile attack from us ships in the area. They are not enough to protect the whole territory of Syria, and delivery of ammunition for these systems requires from Russia much more effort than shipping cruise missiles “Tomahawk” from the United States. However, one of the objectives of Putin’s intervention in the Syrian conflict was a demonstration of weapons to the middle East for potential customers, and also to secure Russia’s image as a reliable partner, ready to support in times of crisis. If Russia will not help Assad to strike back, these goals will be compromised.

Since the annexation of Crimea in 2014, Putin tried to show that the retreat he did not intend. Now trump is forcing events. The retreat — just a year before the presidential election in 2018 — hardly a reasonable option for Putin. He has already called the attack on Sirat “violation of international law”. Now Putin likely finds it necessary to strengthen support for the Assad regime in its attempts to win back territory from the rebels. It is necessary to conduct a successful military operation, in order to dispel the suspicion that he was a coward.

The danger here is that trump may not be able to stop. If the United States will not further intervene in the Syrian conflict, insisting on regime change, those who accused trump that he is Putin’s puppet, regroup, and start again to criticize him.

Now the risk of direct military confrontation between Russia and the United States reached the highest level since the end of the cold war. Their leaders are guided by domestic political considerations and his instincts macho is a pretty dangerous combination. The only winner in this situation was “Islamic state”. Over the last few months the Syrian regime with the support of Russia and the United States successfully led an offensive against the ISIS from all sides. Now the regime may have to focus on their own survival in the face of American threats, and the United States should consider the likely scale of the threat from Russia, with which they may encounter in Syria.

Prosalovskaya news publication Al-Masdar has reported that, according to some sources, ISIS militants launched an offensive in the area of Chirata. In such a complex conflict as the war in Syria, a blow on one side — no matter how aggressive and violent she — inevitably provokes other aggressive parties. Trump cannot defeat ISIS by attacking Assad. So he can only embarrass his opposition in the United States and — to some extent — Putin. And none of this is in the interests of the United States.