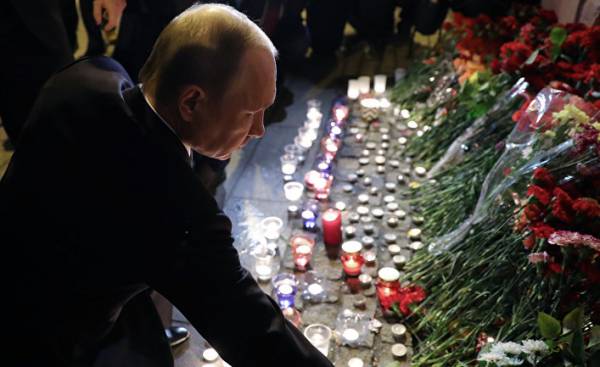 The Russian authorities have made a recommendation to the regions, “especially where there have been protests” March 26, gather rallies against terrorism. It is planned the participation of all parliamentary parties. Why did the Kremlin to carry out “sectioned”, do the Russian authorities to equalize anti-corruption protests and rally against the attacks, “Apostrophe” says Russian political analyst Dmitry Oreshkin.

I don’t think the Russian authorities are trying to absolve themselves of responsibility for the attack. In Russia now the government is in such a state that she did not feel their responsibility for anything. It just seems that it is the work of enemies of the Russian people, enemies of the Russian state, which coordinates some mighty common centre, which is one of its tentacle manages the protests Navalny, others — protests by truckers, and third — promotes bomb ISIS (banned organization in Russia — approx. ed.). This is a normal form of paranoia, which is derived from the system of values on which Vladimir Putin joined a firm foot in 2007 with the Munich speech. Now it all becomes clearer and clearer.

It seems to me that the objective of these rallies organized by the authorities of the Russian Federation, in fact, different. The system in which we now live, hypercentralization, it is limited to one person. So phobias of this man made state. Accordingly, the state machine is running in order for this person to calm down, so he didn’t apply any punitive funds to the state machine. That is why the repression was concentrated mainly in Moscow. After all, the toughest police dispersed protesters Bulk was in the Russian capital. The task was not to neutralize the protest, and to have the first person in my head was postponed a feeling that the protest is neutralized. Task is nice to report.

Same story with the rallies. The goal is to show the first person, not the West and not even the Russian voters that the process is controlled. Look: we time — and led to a rally in 10 times more, which means we control the situation.

But it doesn’t influence mass thinking. People understand that it is the Soviet Union, when unions, factory Directors, government organizations, universities brought workers to the area. They went out and even happy, took the balloons, the flowers. Why? Good to take a walk and drink at the same time. It is clear that such protests are phenomena of a different quality than the protest, which organizes the Bulk, because in the latter case, people are driven by some goal, a system of priorities. And organized power of the protests come from people who do not want to quarrel with its leadership. They said come, they came. This is a purely decorative phenomenon, which has always been involved in order to do what in Soviet times was called “RUB points”. Now the authorities need to RUB points to show that the situation is under control, that there was no protest there, it is a matter of some marginals, which feed off the “cookies” from the state Department. They say, look how many people support you. Some kind of logic. Probably someone of the viewers will take it seriously. But the problem is that these people are becoming less. They are already beginning to experience POLYCRETE irritation in connection with this psevdosovetskoy picture.

The trouble is that it looks like in the end of 1970-ies: even less of the population believes these slogans, and the government look all the more helpless. And all these public processions too.

The thing is that the protest mood in Russia is now growing from inside. After all, humans have and personal experience, except what they say on TV. It is a situation of cognitive dissonance: we on TV say that Russia has risen from its knees, the whole world fears and respects us. And people expect the situation to improve, they really think that Russia has become strong, annexed the Crimea, wiped his nose, “Khokhlov”, the United States put in place in Syria, famous. Because people read the situation from the TV. How can they still read it?

But the man goes to the store and see that prices are rising and incomes are falling. Yesterday announced the decline of the subsistence minimum. Life has become cheaper? No, on the contrary, it became more expensive. Then why reduce the cost of living? People really do not understand. And most importantly, they don’t understand why Ukraine is so far away as ever from Russia. Because the brotherly people hate and understand why. Here is a personal understanding, not through the TV, most active people are pushing on the streets, and the passive is beginning to anger for what they show on TV: how much can you lie? What they used to believe is now causing the irritation.

And this is indirectly confirmed by even sociological methods. The day before yesterday, “Levada-center” has published a new study with direct output: show signs of depression, fatigue and irritation. This does not mean that people will go out. No, I will not go. We have the streets always wears some kind of vocal minority. But it does mean that the era of storm and onslaught fizzles. And this process will continue.

And this time the explosions — a big blow to Putin. Now, the man who thinks more or less independently, himself asks the question: if I go to the rally against the terrorists, it will affect the terrorists? No, they wanted to spit at these meetings. So what difference does it make? This will affect the government, but it screwed up, because it was supposed to provide security. Not provided. Who, then? This meeting in fact shows support for this same government that lost security. Maybe not so specifically, not so clear, but people understand that something. If they celebrated so vibrantly in connection with the annexation of Crimea, forgetting that he had lost 40-million country, which for 300 years was the nearest neighbor, friend, brother. But we have the Crimea. And now that they can not be happy. They understand that they are, to put it mildly, deceived. This understanding grows in breadth and in depth, and nothing to do with it. This is to be expected. How long this process will take is unclear. But the situation in the election year is not pretty for Vladimir Putin.

Do people come to meetings? Will. Nobody wants to lose a job or ruin a relationship with management. They organize these outputs, so what? It doesn’t mean anything. Indeed, the mass procession on 1 may and 7 November were not an expression of support for the course of the party, the government, as a tribute of loyalty, formality. Now will happen the same.