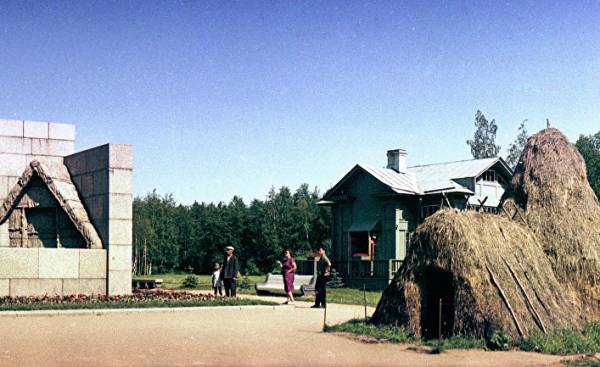 Perhaps the older generation remembers, as in the joyous days of his childhood totalitarian here and there appeared the picture stack, which was lodged by Lenin. But the photo does not refer to pre-revolutionary times, and to the present (time).

After many years, I wanted to know what was behind the stack, because even exceptional Russian straw cannot endure so long, even if she was embalmed, like Lenin himself. Though, probably, at the time that nobody came.

So what is this stack that still stands today?

A bit of history. The Bolshevik leader was hiding from the persecution of the tsarist authorities because it was considered a German spy. And rightly so, because the Bolsheviks supported the defeat of Russia in the First world war. To remain in Petrograd, Lenin was dangerous. In that period there was a warrant for the arrest of 40 of Communist leaders. The leadership of the party decided to hide their leader out of town but in a place where Lenin would be able to continuously receive information on events in the capital.

Home working Sestroretsk arms factory Nikolay Aleksandrovich Yemelyanov was standing close to the station and securely guarded by tall trees and bushes. Near the house was a barn that was used in the commercial needs and as a summer home. Lenin decided to hide in the barn loft, where he made himself a bed of hay, put a table and two chairs. There was Lenin stayed for a few days. However, to stay in the barn for a long time was dangerous, because the neighbors might have noticed the new guest and to inform the police.

So Emelyanov built on a deserted South-Eastern shore of the lake in a small clearing surrounded by dense Bush, a hut made of branches and covered him with hay. In the dwelling were arranged in the recess, wherein Newspapers and documents. Lenin, if required, could pass for a Finnish peasant seasonal workers.

Soon Lenin was joined by Gregory Zinoviev, who was also wanted by the police (in 1936 during the purges of Stalin, Zinoviev was shot).

There, in a thatched hut, Lenin began work on the book “State and revolution”, and the son Yemelyanov Kondraty brought the inhabitants of the tent and all the necessary papers. Lenin and Zinoviev remained there until the eighth of August, 1917, and after went to Finland.

So shelter, something between a tent and a haystack, really existed. But why is his show still?

The secret is trivial. Of course, a tent is a copy that is updated annually. The attraction called “Lenin’s Hut” attracts tourists visiting St. Petersburg suburbs. The idea of the monument appeared in 1924, i.e. in the year of death of Lenin. In 1928 he was raised a stone monument in the form of the hut, and thatch option is distance.

The visitor may not like that the building no genuine straws. In the case of the cruiser “Aurora” or the embalmed Lenin, we at least assume that something original is left there. But in General it doesn’t matter: the spirit of Lenin is so strong, that, undoubtedly, is present in this small sanctuary, which gives the remaining Communist forces in their struggle.