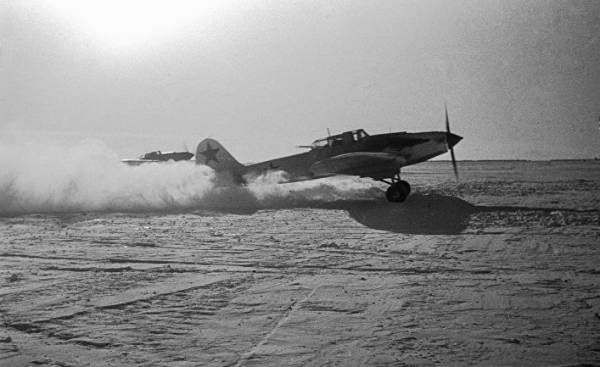 When in the summer of 1941 the advancing army of Nazi Germany came to Leningrad, the German command decided to organize a blockade of the city, in order not to risk the lives of thousands of soldiers. Tremelloni the population of Leningrad for almost 900 days was practically cut off from the world.

During the siege famine, disease and the German bombing claimed the lives of almost 800 thousand people.

Blockade ring was broken January 18, 1943 and January 27, 1944, to force the enemy to finally lift the blockade, the Soviet troops carried out an operation in which were involved hundreds of aircraft attacked the German positions of the air defense to ensure air superiority.

During the operation, one of the Il-2 made an emergency landing on the surface of the lake South of Leningrad. The crew managed to escape, but the plane was lost — as well as dozens of others that never returned from battle.

70 years later, the attack was extracted from the bottom and transported to another continent, America.

“The plane lifted in the early 1990-ies — says James Stemm, Director of restoration work in the aerospace Museum Arizona Tucson. It was acquired by an American, whose family gave the attack our Museum after the death of the owner.”

A single-engine ground-attack aircraft Il-2 once nicknamed “flying tank”. It was built about 36,000 copies — a Il-2 became the most popular plane in the entire history of military aviation.

However, up to our days there were not more than a dozen units, which is surprising, given the importance of the role the attack played in the Second world war.

This role was so significant that in 1941, Joseph Stalin even sent aircraft manufacturers irate telegram, stressing the critical importance of the attack: “the Il-2 Aircraft are necessary for our red Army now, like air, like bread”.

Although the attack, which now recovers an Arizona Museum, spent fifty years at the bottom of the lake, it is remarkably well — not least thanks to the extremely successful design.

“The design of the Il-2 is unique,” explains Stamm showing me installed in the restoration hangar of the Museum bronekapsuly stormtrooper, something resembling a bath.

“The engine and cockpit protected by a thick layer of armor. The stormtrooper looks more like a boiler than a conventional plane.”

Armor was required to protect the crew from enemy fire while, at the extremely low altitude and very low speeds.

“The possibility of destruction by enemy fire, were very high, — says Stemm. — The aircraft could fire from almost all types of weapons — from rifles to air defense guns and even more powerful weapons systems”.

Although the front and center section of the airframe was protected by armor, covering the 12-cylinder engine and crew from enemy fire, the tail and wing attack aircraft was made of wood.

“The choice of material was due to the need to conserve and the desire to reduce the weight of the glider to increase payload,” says Stemm.

Initially, the plane length of 11 meters was designed for a pilot (or pilots, women aviators in the Soviet army were not uncommon). However, in the first months of the war with Germany, it became clear that the attack is vulnerable to attacks from the rear hemisphere.

“As a result, the aircraft hastily modified, says Tim Robinson, editor of journal Aerospace Magazine, published by the Royal aeronautical society. To the rear of the fuselage, outside bronekapsuly, cut the hole and installed cloth seat gunner armed with a machine gun.”

The role of the arrow Il-2, the only protection from enemy bullets and shrapnel was a thin layer of wood, not enjoyed great popularity in the army. As a rule, the life of this crew member was short-lived.

(In fact, the shooter was protected a little better — 6-mm sheet of armor, but only from the tail, which is not much helped him in battle. For comparison, the pilot in the hull was protected by armor thickness of 12 mm. — Ed.)

According to some, due to large losses among shooters in this role, recruited people from among the prisoners of the Gulag.

“The Soviet way of thinking was that as soon as possible to put the aircraft into operation, says Robinson. — The crews took an accelerated course, and they were immediately thrown into battle. The vulnerability of the gunners was seen as the acceptable price of victory.”

“The losses were terrible, — said Stem. — In battles with the German army lost about 12 000 stormtroopers.”

And this is one reason why until now, so few intact copies of the Il-2.

Nevertheless, Stalin was right: Il-2 has become an indispensable aircraft. Links of attack aircraft provided air support to ground troops, destroying tanks, trucks and other armored targets of the enemy. They were also used for bombing enemy airfields and ships.

One of the elements of assault tactic was the “carousel of death” attack, circling each other and thus covering each other, overflew the target at a safe altitude.

On command, one by one the planes went on target, and then returned to the system — until then, until the target is destroyed or until the stormtroopers do not spend all the ammunition.

“Il-2 was one of the aircraft, ensured the victory in the war,” says Stemm.

However, after the Second world war most of the remaining stormtroopers disposed of, and they were replaced by jet aircraft.

The latest episode of the combat use of Il-2 (more precisely, its modification Il — 10) took place in 1950, during the Korean war.

Now in the world there is only one instance of a flying attack aircraft, and the engine it has is not original. By the way, this plane is also raised from the lake bottom and restored to airworthiness in the United States.

However, the concept stormtrooper is still in use. “The design of the Il-2 proved to be so effective that it was adopted in America,” says Stemm.

“The idea of the armored attack was embodied in the American A-10 Thunderbolt, which has been serving to this day, he explains. The concept essentially remained the same: the A-10 is the successor of the Soviet Il-2”.

Such a plane is in Russia: the su-25, which, perhaps, will be even more close relative Il-2.

Specialists Arizona aerospace Museum is now restored Il-2 shot down near Leningrad in 1944.

Although some elements of the design is still suitable for flight operations, the goal of restorers — to recreate the plane exclusively for terrestrial exposure.

Completed work on creating a new tail and a new wing; propeller straightened, and the engine repaired.

Now the Museum is working on creating exact copies of the rear machine gun and a rotating turret. The plane expect to put on public display this summer.

Often make in the West the list of aircraft that contributed to the defeat of Nazi Germany, no representatives of the Soviet aviation.

Il-2 deserves no less honor than the British Supermarine Spitfire, Avro Lancaster or the American heavy bomber Boeing B-17.

“From a historical point of view, but also because of the very limited number of copies, preserved to our times, the restoration of this aircraft is a very important task,” says Stemm.