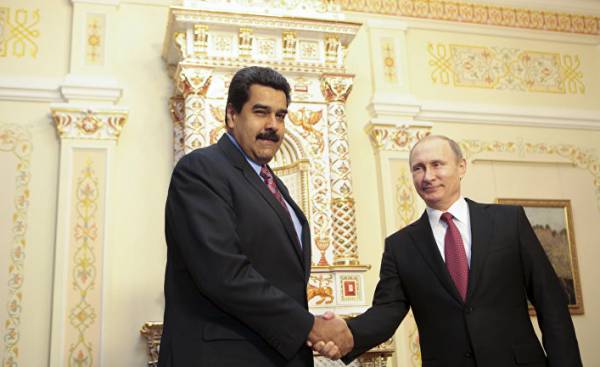 Initially, Venezuela was oil. It is also one of the reasons for the parliamentary coup attempts made by Nicolas Maduro by the Supreme court. The main reason for the deprivation of a legislature of its authority was the crisis of the state oil company PDVSA. Maduro needs to break the resistance of the National Assembly, unwilling to endorse the Association of PDVSA with foreign companies to develop fields in the Orinoco river basin. PDVSA is on the verge of bankruptcy and the transition into administration. If that happens, the fate Maduro is a foregone conclusion. The attempted coup was another step of chavistas on the way to the final tightening of the screws. But to understand this, we need to warn you that from an economic point of view, the dictatorship was cornered.

If the pressure on the Parliament has been insufficient to subdue the Supreme court, Executive power on Saturday, the pressure increased. The Supreme court justices were quickly recanted as soon as the security Council, headed by Maduro gave the order. In the end, the President blamed “anti-Patriotic forces” in that they paint a distorted picture of Venezuelan statehood.

Question revised due to external pressure. And not so much because of the criticism of those who have long accused the Bolivarian regime is undemocratic. The greatest dissatisfaction was expressed by friendly countries.

Cuban leader Raul Castro did not speak. So as not to attract attention to the situation in Cuba, he prefers not to talk about the situation in other countries. But the government of Rafael Correa was quick to clarify that Ecuador is not Venezuela. The Minister of foreign Affairs Guillaume long (Guillaume Long) also criticized the attempt to equate the Ecuadorian regime chavismo. And this is understandable. The crisis in Caracas broke out 72 hours before the voting in Ecuador. Opposition candidate Guillermo Lasso (Guillermo Lasso) has demanded a recount to prevent a repetition of the troubles that have befallen Venezuela. Call from Correa could play a crucial role in reviewing the decision on deprivation of powers of the Parliament of Venezuela.

The Vatican has made its position in the newspaper L’osservatore Romano, published on Saturday a note under the heading “Chaos in Venezuela.” On Sunday the Holy see welcomed the resumption of dialogue. Pope Francis said that he is closely watching the situation in Venezuela and in Paraguay, where on Saturday during protests against Cartes Horacio (Horacio Cartes) seeking re-election, one person was killed and thirty were injured. Evo Morales also wants to be re-elected for another presidential term, wishing to justify Maduro, has compared the riots in Paraguay, protests in Venezuela. Do not say anything, friendship is friendship.

Holy see unhappy with Maduro. The mediation mission undertaken by the Pope in October last year, failed. In December, Secretary of state Parolin Antonio (Antonio Parolín), always opposed the participation of Rome in the resolution of the Venezuelan crisis, sent a letter to Maduro, demanding that he satisfy the obligations. He has not yet received.

Deprivation of Parliament’s powers caused unease in the southern common market (Mercosur), of which Venezuela is. The foreign Ministers of Brazil, Paraguay and Uruguay, was on Saturday taken in Buenos Aires their Argentine colleague Susana Malcorra (Susana Malcorra) to Express their opinion about the situations. A day earlier, foreign Minister of Brazil, Aloisio Nunez (Aloysio Nunes) requested the deletion of Venezuela from Mercosur. Such a requirement would gladly have voiced Argentina’s President Mauricio Macri.

But these are tough calls have not been heeded. Meeting of Mercosur was made possible because it was a request of the Uruguayan government: the issue of exclusion was not included in the agenda, and was not even mentioned Uchwyci Protocol (Protocolo de Ushuaia), requiring adherence to democratic norms. Socialist tabaré vázquez (Tabaré Vázquez) failed to ensure that his coalition Broad front (Frente Amplio) assumed the condemnation of chavismo. The coalition expressed its concern about “undermining the constitutional order” without mentioning the violation of democracy. And the Communist party abstained from comment.

Taking into account the position of Uruguay, foreign Ministers of countries-members of Mercosur, signed a communiqué, which involves the use of Ushuistov Protocol, although the title of the document is not mentioned. And I made another decision: all four countries have made to the Organization of American States (OAS) regarding Venezuela as a single unit.

The role of Uruguay makes the question for another reason: the leader of the left wing of the ruling party Jose Mujica (José Mujica) had a fight with his former foreign Minister Luis Almagro (Luis Almagro) because of its extremely tough position as Secretary General of the OAS. In recent years, Mujica has been extremely active and constantly repeating his favorite argument: without dialogue inside Venezuela’s crisis is impossible to solve. Uruguay offers its assistance in those matters in which others have failed.

Maduro caught between pressure from the external world and internal financial difficulties. This month Venezuela will have to pay USD 2.9 billion debt to PDVSA. The government made a bet that he come to the rescue of Vladimir Putin, by combining Rosneft and PDVSA. The deprivation of the National Assembly of its powers was intended to give the Supreme court the right to grant the permission for this transaction. The opposition opposes and promises to revise it, if they ever come to power. Due to such uncertain prospects “Rosneft” has not yet made a final decision. Maduro’s fate is in the hands of Putin.