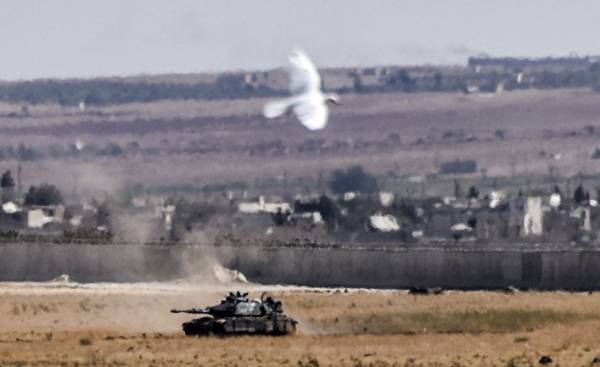 Ankara, who yesterday made the statement, “we’re going to Manbij,” he completed the operation “Shield of the Euphrates”. This is a consequence of the constrained position in which she found herself. Ankara was confined in the triangle Jerablus — Azaz — El-Bab. Although the operation is positioned as a “success”, finished her Turkey, and Moscow and Washington.

A few days after the statements of the government and the Palace “on stage — Manbij” it was said that the operation “shield of the Euphrates” “completed successfully”. The Prime Minister yıldırım (Yıldırım) said: “the Operation “Shield of the Euphrates” is over; in the future, if necessary, can be carried out a new operation, but under a different name.” In a statement, national security Council (NSC) has also placed emphasis on “success”.

Can the operation “Shield of the Euphrates” to write a success story, according to the ruling leadership? What was “success” in the operation, which began seven months ago, which lasted 216 days, during which 71 military killed about 300 soldiers were injured, more than 600 fighters of the Free Syrian army (FSA), who fought against the Turkish armed forces, was killed, is a mystery.

The operation had three objectives: 1) to push back ISIS (banned in Russia — approx. ed.) from the border; 2) to stop the people’s protection Units (YPG) to unite the cantons; 3) to create a buffer zone in Syria.

Only one of these goals was partly achieved, is to create through the SSA, the actual situation in Northern Syria. But neither prevented the unification of the Kurdish cantons or eliminate the danger of ISIS, nor to declare the buffer zone failed.

Instead, in the region continue to fully present the players, which is against Turkey and that was the reason for her entry into Syria. While the Party “Democratic Union” (PYD) and the Syrian government increased its power, LIH, although distant from the border, but maintains its presence in front of El-Bab and in the region. YPG has strengthened its relations with the US and with Russia and could become an important ally. Along with this, Russia and the United States, making YPG ally, largely entrenched in the region.

Russia and the United States surrounded on three sides

Although the operation “shield of the Euphrates”, which has led to defeat, the political authorities wish to advertise as a success, this operation was a fiasco militarily, and politically. Despite the fact that the statement of completion of the operation, which allegedly reached the desired objectives, was made just now, in fact it is long over. Turkey, sandwiched in the “buffer zone” between Jerablus, a’zaz and al-Bab, came to those of their “natural boundaries”, which were able to reach. The operation was completed, not Turkey, which is in this triangle has been unable to do steps and moves of Russia and the United States in Syria.

24 August operation “shield of the Euphrates” was started with the permission of Moscow and Washington and moved in exactly the wrong direction, which identified these forces. It was assumed that Turkey will remain in the “pocket” that extends from the Euphrates to the West of Azaz, from Jerablus to El-Baba. Each time when Turkey wanted to go beyond the limits drawn for her boundaries, she ran into the obstacle of the US and Russia. Turkey, which the US and Russia took ticks in the “buffer zone” could no longer go beyond the boundaries of designated areas.

Two global player, the US and Russia, there stood a wall to prevent the intervention of Turkey in Manbij and Kurdish cantons. And Afrin in the West and in Manbij in the East, Russia has created a buffer zone between YPG and the Turkish armed forces. YPG in response to threats of Ankara gave the Syrian army supported by Russia, a village in the West Manuja, agreed to the creation of the Russian base in ‘ Afrīn. Similarly, States located between the YPG and the Turkish armed forces on the South Bank of the river Sajour in the North-East of Manuja.

For taken just before the referendum a decision on the termination of the operation, during which they incurred heavy losses, despite the absence of any serious resistance except El-Baba, the intention to extract a success story from rout. That is why the statement of the NSS, and in statements by officials, especially Prime Minister Yildirim, persistently draws attention to the word “success”.

The operation in the hands of Turkey was only a line length of 90 kilometers from East to West from Azaz and Jerablus to a width of 30 kilometers from North to South from Shabanbay to El-Baba.

Another noteworthy fact was that the completion of the operation coincided with a visit by U.S. Secretary of state Rex Tillerson (Rex Tillerson) in Ankara. The priority for the United States — the capture of Raqqa. The US is trying to refresh its image on the international stage, having donned the role of “hero” liberated Raqqa from ISIS. They want Turkey, too, has focused on operations in raqqa. Central to the course of the visit, Tillerson took this operation and the role of Turkey in it.

In Raqqa, the United States will go with the YPG. It was necessary to calm the YPG, in whose hands Manbij. YPG, which will be a vanguard force of the operation should not have been tormented with thoughts and worry of a possible attack of Turkey in Manbij and other cantons. Now is calm assured.

The balance of the operation “Shield of the Euphrates”

The operation “Shield of the Euphrates” began on 24 August 2016. The operation was attended by about three thousand soldiers. In the operation, conducted jointly with the SSA for 216 days, ISIS was consistently released Jerablus, Suran, Dabic, El-Bab. To date, 71 military lost his life, 245 soldiers were wounded. This number does not include two soldiers, who allegedly was burned alive by ISIS. During this time, SSA has lost about 600 of his fighters. 243 settlements and an area of about 2 thousand 15 square kilometers has been brought under control. According to the statement, the Turkish armed forces, has cleared a total of 2 705 thousands of members of ISIS, among them 2 thousand 288 is eliminated.

Former Consul in Erbil Aydin Selcen (Aydın Selcen): did not see that coming

The operation “shield of the Euphrates” the decision itself, but in the end she put the moves Moscow and Washington in Syria. The purpose of the transaction and the scale never openly declared to the public opinion.

Went ahead without a strategy. Got carried away with the idea that a fait accompli that the military will create on the battlefield will strengthen the positions at the negotiating table. The gap between words and action is gradually increased. Did not see that the inconsistency and unpredictability will destroy the quality of Ankara as a reliable partner, will lead to a complete loss of reputation. While the territorial integrity and national unity of Syria (as in Iraq after 2003) are continuously restored over Ankara’s looming liability for the direct or indirect control of a “pocket” area of two thousand square kilometers for an indefinite period of time.

While the curtain ISIS and jihadist resistance in Syria is closed, ignored the fact that this pocket actually become a dumping ground for the armed jihadists, and this situation will pose a very serious threat to the national security of our country, which will be difficult to handle.

If we look at the events on the battlefield, the exemption from the ISIS such an important “front door”, as Jerablus, the isolation line Azaz — Ar-Rai — Jerablus from terrorists, the seizure was so important to ISIS places as Dabic, from the point of view of community relations, and finally Stripping the El-Baba from ISIS, in my opinion, not needed (with heavy losses, unfortunately), it can be considered a “success”. Although from the South El-Baba, the Syrian army with the support of Russia opened a corridor, which will connect Afrin and Kobani, the fact that these two Canton were not United directly under the control of the YPG, without a doubt, consistent with the objectives of Ankara have set yourself.