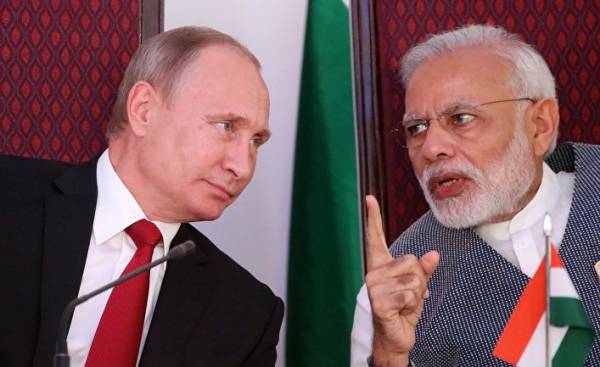 From 1 to 3 June, Prime Minister Narendra modi will visit Russia as the guest of honor at the St. Petersburg economic forum, where India participates as the partner country. Despite criticism coming from certain circles that our relations with Russia do not fall out of the purview of the Prime Minister since his coming to power. The constant emphasis on defence relations. Economic relations still leave much to be desired, although in recent years there has been a welcome increase in energy. The Narendra modi visit to St. Petersburg to participate in the economic event (the St. Petersburg international economic forum) testifies to the mutual desire of the parties to strengthen trade and investment framework of our strategic relationship.

The visit is also timely from a political point of view, since Russia has loudly declared itself in the international arena thanks to its bold and ambitious intervention in the events in Syria changed in the performance world about Vladimir Putin, which began to consider a geo-strategic genius. Contrary to what former US President Barack Obama denigrates Russia, calling it only a regional power, Moscow is now regarded as a key player, can significantly affect conflict resolution in the middle East.

Providing a crucial role in this crisis-torn region, Russia is now acquired strengthens geopolitical position, taking the lead in advancing the process of peaceful settlement in Afghanistan without the participation of the United States. This initiative has positioned Russia as part of a plan to fight ISIS (an organization banned in Russia — approx. ed.) that threatens its security through Afghanistan and Central Asia. We can assume that the diplomatic revival of Russia, despite the economic, political and military pressure from NATO, will stop the process of its transformation into a Junior partner gaining strength and conductive geopolitical expansion of China, which grows its power is seeking to expand the influence not only in Asia but also beyond.

Despite some anxious mood, has recently emerged in political discourses in both countries, our relations with Russia remain of fundamental stability. In Russia believe that India is strategically moving closer to the US, while Moscow’s relations with Washington have deteriorated sharply. Our growing purchases of American weapons are perceived in Russia as an assault on the area where it has historically held a leading position. The China factor in our growing strategic ties with the US, even though the strategic interaction of Russia with China is deepening because of the American factor has led to a mutual misunderstanding by us of the strategic challenges facing each country.

From an Indian point of view, closer strategic coordination between Moscow and Beijing gives the Chinese more space for diplomatic maneuver in terms of tightening its position with respect to our membership in the nuclear suppliers Group and the recognition of the head of “Jaish-I-Muhammad” Masood Azhar international terrorist by the relevant Committee of the UN security Council, because it imposes restrictions on the extent of support that Russia provides to us at specialized sites on both issues.

Apart from increasing Russia’s supply of advanced military equipment to China, we also cannot ignore its political and military flirtation with Pakistan, including the sale of offensive weapons, conducting military exercises and the recognition of the political legitimacy of the Taliban (organization banned in Russia — approx.ed.) despite the use of Islamabad that the Afghan movement for their own purposes, including limiting the role of India in Afghanistan.

Common sense dictates that we should not exaggerate the importance of the arisen mutual concerns of Moscow and new Delhi. Russia has its own issues with China, despite the rapprochement between the parties in areas of mutual interest. We also have concerns regarding several aspects of U.S. policy toward Pakistan, which for the sake of our satisfaction, no one will not change. We also are aware that U.S.-China relations deeper ties between India and the United States, and at the forefront of Washington will put attempts to cope with China through economic pressure in order to avoid him of military conflict. Therefore, India needs to adjust relations with the United States in the light of such realities. Because in the public mind, Russia is perceived as a “proven and reliable” friend of India, any roughness in the bilateral relations attract too much media attention.

We are not talking about the fact that in our relations with Russia in the past had no difficulty — just they are not mentioned on the official level. As for Russia, the emergence of India as an independent power centre, and may not have been sufficiently taken into account when developing policy of Moscow, which caused not quite true perception of the vital aspirations of the Indian side to expand its network of strategic alliances.

We need to discuss with Russia a lot of issues beyond economic cooperation. It is important to make the required clarity on a number of concern the Russian initiatives in our region. The election of Donald trump has resulted in considerable uncertainty in the international business when allies, friends and adversaries of the United States has no confidence in understanding the course of American policy under the new President. His inclination to establish ties with Russia and, at least, to interact with it in eliminating ISIS meets violent resistance in the United States.

Of great interest will represent the views of Vladimir Putin on the prospects of establishing relations with the US with Donald trump. Scheduled for April meeting Donald trump and President XI Jinping will show, in what direction will develop U.S.-China relations, which in turn will have consequences for India and for Russia. Both countries will impact the administration’s actions trump against Iran. We will with interest to observe the approaches of Vladimir Putin to develop Russia’s ties with the crisis-ridden Europe and Turkey.

A strong relationship with Russia is essential for maintaining balance in our foreign policy and strategic independence of the country. Our desire to become the leading power needs.

The Kanwal Sibal is a former first Deputy Minister of foreign Affairs of India.