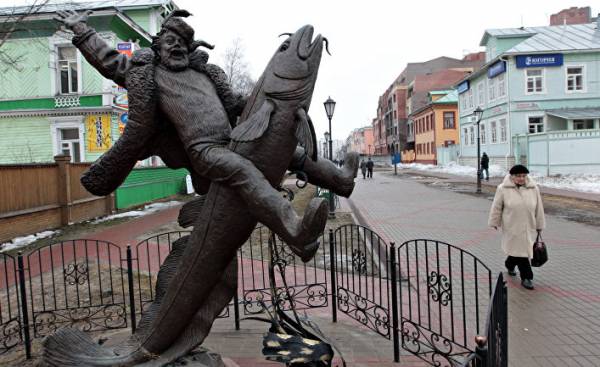 Russia’s Arkhangelsk is called the gate to the Arctic. Now the ports in this city live in economy mode, waiting for the launch traffic on the Northern sea route.

The movement of ships at sea through the cargo terminal in Central Arkhangelsk is now just as frozen and still as the ice on the Dvina river.

On the dock, nothing is immersed and not unloaded. Instead, here is one of the ships of the fleet, where armed soldiers stand on duty at the similar.

Statistics says the same thing. In recent years, the port traffic the city has fallen by half. Last year in Arkhangelsk handled a total of three million tons of goods.

At the same time, the city has high hopes that this trend will change, primarily due to the development of the Arctic.

Arkhangelsk has always lived at the expense of exports of wood, paper and fish. But now inside the port building sold shirts, jeans and shoes. The one who needs to fish, forced to cross the street to reach the Central market.

On the shelves is a lot different fish, but all of it deep-frozen, not a single fresh fish as far as the eye.

“That’s because now we have capitalism, — says Marina, a saleswoman at one of the stalls — they Now freeze the fish right on the trawlers in the Barents sea to bring her here. So effectively”.

“In Soviet times we had more fresh fish then fuel was cheaper, and no one counted the money, and now capitalism, and I count every ruble.”

According to Marina, that people often buy two types of fish: flounder and cod.

“Now the fish has become expensive,” she says, ” but in the Arkhangelsk people will still buy it because it’s tradition. We still have salmon, but it is twice more expensive than the flounder, and also import it from Chile. Own the Atlantic salmon we get only in the summer.”

Most of the fish that are sold on the trading floor, comes here from the fish terminal, which is 20 kilometers from the city.

“The length of the terminal, 300 meters, we accept there are other products, not only fish,” — said the Director of the Maxim Regalo.

It is the largest fishing terminal in the region, but it is calm. Cranes stand still, not one of the eight trawlers of the fleet are seen, but at the pier is the trailer and unloaded the wood, which will be exported.

“All quiet, because the ice was still standing, the movement will revive only since may,” explains’ve Dragula.

Like many others in the North, the company was Regalo hoped that the Northern route between Europe and Asia can begin to use quite different when the Arctic ice melts and the road becomes more passable.

“It’s important for us to start cooperation with our colleagues in the far East, the fishing fleet of Sakhalin and Kamchatka, — says Dragula. — We want to start transporting fish along the Northern sea route from there to here, in our own terminal. Then this fish will go further North-West of Russia and also in Europe.”

In other words, optimism is huge, but practical results are still few.

“Our next step will be the construction this summer of a new container warehouse,” says Regalo.

And he might need. Today, the warehouse is just one open room, where there is rust and a few containers.

The Chinese are everywhere

Employees of the fishing terminal is not the only one who makes the plans with the idea of the Northern sea route.

The Russian state also has big plans for the city, it intends to build an entirely new deep-water port just North of the fishing terminal.

The port will function as a new gate to Northern trade routes between China, Russia and the EU.

Chinese investors have already expressed interest in this major project, which will cost at least a billion euros. The contract between Arkhangelsk and Beijing signed.

According to the plan, the port will be open within six years. At the first stage it will accept 30 million products per year.

The second mega project in the region — a new rail route for transporting goods from the Northern Murmansk through Arkhangelsk to the Urals in the Perm.