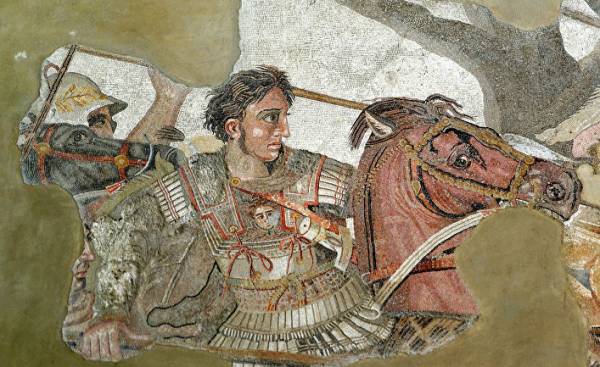 Say, when Alexander the Great in June 323 BC was lying on his deathbed in Babylon, the question of his generals, whom he would leave his Empire, he answered, the strongest of you. He said that after his death will ignite a fierce struggle for the inheritance. Then the person who won just over ten years, the world from the Aegean sea to India, died.

Alexander knew who did. They squandered power and money that their king has gathered in the endless wars. Their troops fought in Africa, Europe and Asia, all fought against all, they created a coalition to shortly again to speak out against partner. Their Macedonian and Greek soldiers belonged to the world, the conquered were the victims. Only in the year 301 BC, almost a generation after the death of Alexander, it led to the decisive battle of IPSE in Asia Minor. The last of the diadochi (Greek for “successors”), required to preserve the Empire as a single whole, lost. On its ruins arose three empires, which were to determine the history of the Middle East before the invasion of the Romans.

A few of the successors of Alexander survived the war. His family — mother, little son and half — brother were victims of killers. Alexander Regent Perdiccas (Perdikkas), which dying he entrusted his ring with the seal, was killed during the invasion of Egypt. Crater (Krateros), a favorite of ordinary soldiers, fallen in battle against Almena, head of the Royal Chancellery, which, in turn, died in Iran. Antipater (Antipater), the Governor of the European countries of the Kingdom of Macedon died in his bed. But his successor, Polysperchon (Polyperchon) was less fortunate, as well as many lesser-known generals and satraps.

By 301 BC there are only two parties. On one side were Antigonus I one-eyed (Monophtalmos) and his restless and charismatic son of Demetrius (Demetrios) it [poliorket] it, called “the besieger of cities” (Poliorketes) because of its specialization. Unlike the other surviving diadochi Antigonus served as a General under Alexander’s father Philip II, but also earned the trust of the son, who during the offensive in Persia had sent him on a mission to Asia Minor to break the last pockets of resistance on the Peninsula.

After the death of Alexander, Antigonus and his son walked steadily to increase their holdings at the expense of rivals. After the triumphant victory in the land and sea battle of Salamis in Cyprus in 306 BC, both Antigonid took the title of king. This was due to the claim to the entire Empire that was conquered by Alexander. In this way, Demetrius began the accession of Greece to his Empire.

This alarmed Cassander (Kassander), who ascended to the Governor of Macedonia. Together with longtime bodyguard of Alexander by Ptolemy (Ptolemaios), who after the death of the king ruled Egypt, Lysimachus (Lysimachos), the ruler of Thrace, and Seleucus (Seleukos), headed by ambitious trips from Babylon to the East, together with Cassander formed a party of the diadochi, for which Alexander’s Empire was history and who wanted to enjoy their powers in his own “lance conquered” country. They also adorn themselves with a Royal title, without far-reaching claims, only in order to show that Antigonid don’t have to stand over them.

Fear before the superior forces of Demetrius Cassander formed a coalition with his neighbor Lysimachus and Ptolemy, which pursued its interests in the southern part of Asia Minor and in the Aegean sea. Somehow, these three managed to resume contact with Selecom. Which, meanwhile, following the example of Alexander, graduated from the “Anabasis” (“ascension”), as it was then called the military campaign of Alexander in the mountains of Mesopotamia and Iran. Seleucus was able to move to India, where he was intelligent enough to negotiate with the local rulers of the agreement. Macedonian abandoned the Eastern provinces of Alexander’s Empire in return for the delivery of 500 war elephants. In 302 BC he returned to Babylon by the winner.

All participants were clear that we are talking about the final decision. Cassander, the weakest of them, put 12 thousand people, half of them drowned while crossing the Black sea. With survivors and your own troops Lysimachus tried to restrain Antigone, as long as Ptolemy did not come to be by land. After both of the army in 302 BC, wintered in Asia Minor, they were joined by Seleucus. As its share in the total military force was the greatest, he assumed the Supreme command. Ptolemy, by contrast, came under some pretext to Egypt, while Demetrius hurried out of Greece to his father.

Fragmentary tradition of the history of the diadochi something to tell, but the information about the decisive battle transferred to a few suggestions. Location IASA (presumably today’s Afyon in Western Anatolia) is still not precisely defined. In his biography of Demetrius, the Greek Plutarch (Plutarch) in 100 year of our era sketched the location of the troops. By the time Antigonus had 70 thousand soldiers of infantry, 10 thousand riders and 75 war elephants. The allies brought to the battlefield 62 thousand infantry, 10.5 thousand cavalry and 480 elephants. In sum, it represented one of the largest armies in the ancient world.

Their order of battle followed the Macedonian model. In the center stood a phalanx, heavily armed infantry with six foot spears (carissimi), on the flanks of the cavalry. While Seleucus kept his elephants in reserve, Antigonus put them on the front line. Then Demetrius began the battle by the cavalry. Against him came Antiochus (Antiochos), son of Seleucus, with his horsemen, but could not survive under the pressure of the enemy and were driven from the battlefield.

But this exposed the left flank of the Antigone. Seleucus found loopholes and sent his elephants to attack them. When Demetrius finally stopped their cavalry was going to come to the aid of his father, he found the way blocked by the huge animal. On the other hand, the troops of Antigonus saw that their chances melt away and began to run across to the enemy. When lance killed their 81-year-old commander, his army finally collapsed. Until the last moment, the aged father was hoping his son will come to his aid. But his “vanity and audacity,” wrote Plutarch, was more than the military results.

With less than 10 thousand people Demetrius was able to leave. But the idea of a common Macedonian-Greek world Empire was. The world civilization of Hellenism developed in a fragmented political map. The winners divided up the Empire of Antigonus among themselves. However, Seleucus, who got Syria, found that Ptolemy took Palestine and Lebanon, what was the cause for many future wars. Lysimachus received the Western part of Asia Minor, Cassander got freedom of action in Greece.

The battle between the surviving diadochi continued. In the end, Antigone Gonata, son of Demetrius, even managed to become the king of Macedonia, at the time, like Lysimachus in 281 BC, in the end lost to Seleucus. Egypt, Macedonia and Syria became centres of the three great powers, which were to determine the course of the political history of Hellenism.