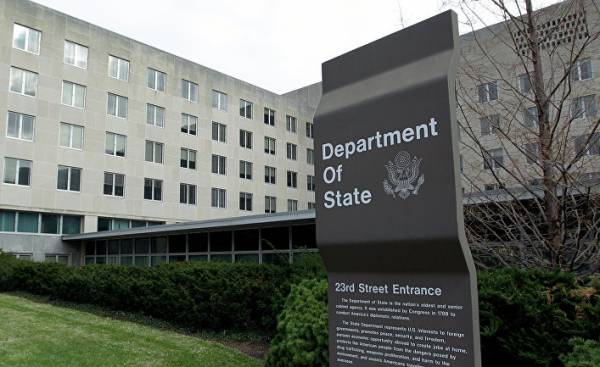 Edition of the Washington Post reported on Sunday in Russia numerous protests against the rampant corruption of the authorities, which were followed by mass arrests:

“Too fierce and nothing is not afraid of people took to the streets — they are tired of sweeping the country of corruption and what the government is unwilling or unable to stop it. Police in cities across Russia responded to the demonstrations with barricades, tear gas and mass arrests.

Sunday night, riot police in flak jackets and helmets arrested in the center of Moscow more than 700 demonstrators, but a crowd of tens of thousands of people hooted, whistled and chanted: “Shame! Shame!”… One of the first people arrested in Moscow, was the main organizer of the rallies Alexei Navalny, who called people out to protest, saying before about the fact that Prime Minister Dmitry Medvedev owns vineyards, luxury yachts and luxury mansions worth over a billion dollars.

The arrest of Navalny sparked protests by human rights activists. When Monday morning (after the country was swept by anti-government protests — one of the most massive in recent years), he appeared at the hearing, a Moscow court has appointed to it punishment in the form of “15 days in jail and a fine of 20 thousand rubles for disobeying police, and the organization of protest.”

Throughout the day when the much-loved President trump the authoritarian regime carried out arrests, the White house kept the absolute and eerie silence. Will the administration be silent (as in the recent murders of prominent figures who spoke out against Putin), thus demonstrating complete indifference to the bandit actions of Vladimir Putin? On Sunday evening the state Department issued the first harsh criticism of the administration in Russia. Press Secretary mark Toner (Toner Mark) made a written statement:

“The United States strongly condemns the arrest on Sunday of hundreds of peaceful demonstrators across Russia. The detention of peaceful demonstrators, human rights defenders and journalists is an affront to basic democratic values. We were dismayed to learn of the arrest of opposition leader Alexei Navalny after his arrival to the demonstration, and that of his organization in the fight against corruption was carried out police raids.

United States will monitor this situation and we urge the Russian government to immediately release all peaceful demonstrators. The Russian people, like people everywhere, deserve a government that supports an open marketplace of ideas, transparent and accountable governance, equality before the law and provides the ability to exercise their rights without fear of retribution.”

And yet we still we have heard nothing neither about what happened nor about your favorite new ruthless tactics of Putin, directly from the White house. Maybe Putin is inspired by trump’s unwillingness to criticize it, has adopted murder as a regular tool of state power. “As a result of the blatant murder of Russian policy committed to [last] week in broad daylight near the Ukrainian hotel, the number of high-ranking Russians, died in five months after a meeting held on 8 November presidential elections in the United States, has now reached eight, reports CNN. — Among the dead — five Russian diplomats. As it turned out, some of the deaths were from natural causes, and authorities exclude that they were caused by violent criminal acts.”

Condemnation of Russia (albeit belated) marks the first real criticism of Russia’s actions by the administration. She followed with statements by prominent Republican senators and Democrats. The Republican Senator from Arkansas, Tom cotton (Tom Cotton) accused Putin, uttered a laconic phrase: “Today’s protest shows that corruption, propaganda and veiled oppression are unreliable prop for power — even if it is headed by a man so cruel and cynical as Putin”. Senior democratic Senator from Maryland Ben Cardin (Ben Cardin) from the U.S. congressional Committee on foreign Affairs issued its own statement: “I strongly condemn today’s detentions in Moscow and throughout Russia, of hundreds of peaceful demonstrators. This once again shows that the space of civil society in Putin’s Russia is unravelling”. He called trump “to keep the U.S. commitment to internationally recognized human rights and democratic principles in accordance with the Helsinki final act. Any future dialogue with the Russian government should not downplay the importance of these key American values.”

As a result of the events of recent days raises several questions:

— Can the state Department’s statement to mean the revaluation policy of reverence and admiration for President Putin, or this is evidence that the Secretary of state Rex Tillerson (Rex Tillerson) has finally decided to actively and aggressively act on their own?

— Is the unfolding of the “Russian scandal” potentially that team trump tore it plans to exercise its option to “reset” relations? Given the widespread speculation about trump economic relations with Russia and the possible collusion of members of his team with Russian officials, Trump now, it may be necessary to avoid actions that create the impression that he is Putin’s puppet.

— Will we finally witness the abandonment of the policy of the Obama administration, not wishing to engage with human rights issues, and see whether the actions aimed at the protection of the democratic countries and civil liberties?

— Recognize whether the US authorities (as did the protesters in Russia) that the conviction and confirmation of evidence of criminal activities of Putin is a threat to his power? We argue that Congress should develop an economic Magnitsky act (similar to the existing Magnitsky act, which is used to identify persons involved in crimes against human rights, and the application of sanctions against them) — so that the kleptocrats who Rob their countries could not keep their ill-gotten wealth in the United States.

The statement made Sunday by the state Department, allows us to hope that Tillerson has already settled in your seat and ready to defend democratic values around the world. If so, then it would be the most positive development during the short time that he is at his post.